Will the first Event Horizon Telescope image of the Milky Way's black hole Sgr A* just be another lumpy orange donut?

@HDE226868's answer to Why doesn't the black hole in the center of the Milky Way glow similarly to the famous M87 image? explains that neither black hole is orange and any Event Horizon Telescope images will be made at about 1 mm (~300 GHz). It goes on to point out that there's going to be far less emission from Sgr A*'s accretion disk than there is from that one. Of course ours is a lot closer, but it's not always active; unless a dust cloud wanders by and falls in. For more on that see answers to Why not take a picture of a closer black hole?

@RobJeffries' answer to How can the Event Horizon Telescope image Sgr A when it's not visible from all sites at one time?* points out that our disk might also vary in appearance over timescales of minutes rather than months, so it's going to be a new challenge in terms of data processing.

Question: Will the first Event Horizon Telescope image of the Milky Way's black hole be just another orange donut?

When all is said and done though, will the first EHT image of Sgr A* look pretty much like M87; a lumpy orange donut? I know there is an issue of inclination, but it won't look like it's edge-on because of the way light bends around, so I think it's necessary to consult a simulation. Another issue is the accretion source itself; will there be a disk or just spiraling filaments? Assuming the same wavelength and baseline there is a possibility of higher resolution, and the shorter timescale compared to M87 might be offset by a much sorter distance and therefore brightness.

Yes. See today's press release from the Event Horizon Telescope. The image is remarkably similar to M87, but note that this a time-averaged composite over about 10 hours, because the emission from the smaller Milky Way black hole varies on timescales of minutes.

Sgr A* is about 1500 times less massive than the black hole in M87, but is two thousand times closer. Since the Schwarzschild radius scales linearly with mass then they turn out to have about the same angular size.

To make the comparison mor explicit, here are M87 and the Milky Way black hole side by side at the same angular scale (from the ESO press release). The reliable feature of the Sgr A* image is the presence of a ring. Less reliable are the azimuthal "lumps", which come and go in time and are not reliably reproduced in the various image reconstruction methods. 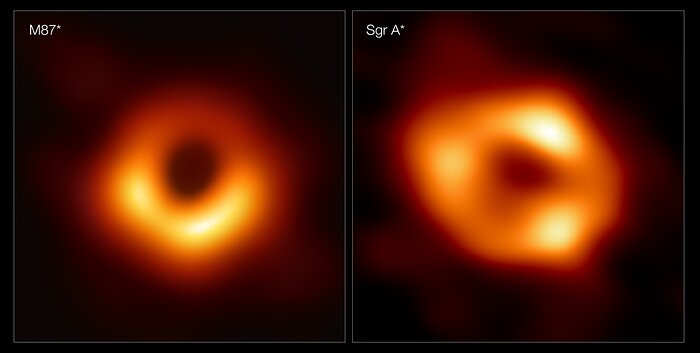 70
Why not take a picture of a closer black hole?
8
Is the appearance of accretion disks of M87 and Sgr A* in EHT image, related to the nucleus being active or non-active?
6
How can the Event Horizon Telescope image Sgr A* when it's not visible from all sites at one time?
8
Why doesn't the black hole in the center of the Milky Way glow similarly to the famous M87 image?
3
How will they know when to start taking the picture of the black hole at the center of the Milky Way?
3
Why were only 4 days of data used in the M87 EHT observation?
1
Why hasn't the EHT taken an image of Sgr A*?