If an object 1 billion light years away emits light, does it take more than 1 billion years to reach us because of the expansion of the universe?

From page 7 of the recent (September 26, 2020) edition of Science News Magazine:

But that means the object(s) were only about 4 billion light-years or so away when the merger of two black holes occurred, right? But it take 7 billion light-years, rather than approximately four, for the gravitational waves to reach us because of the expansion of the universe itself?

Is there an online calculator that can calculate this? Does anybody know the equation(s) interconverting current distance, original distance and travel time of the radiation?

Yes, in the time it takes light — or, in this case, gravitational waves (GWs) from the black hole merger event GW190521 — to travel from a source to an observer, the Universe expands, thus increasing the distance further.

There is a slight confusion, I think, in the quoted distance of $17\,\mathrm{Glyr}$ (Abbott et al. 2020): This is the so-called luminosity distance, which is the distance that satisfies the usual inverse-square law. This is not the same distance that you would measure if you were to freeze time and lay out meter sticks. This physical distance is smaller, only $9.5\,\mathrm{Glyr}$.

These values correspond to a redshift of $z=0.82$. That is, if GW190521 was luminous, its light would be redshifted by a factor $(1+z)=1.82$. In fact, in this case an electromagnetic counterpart was reported, albeit not with a measured redshift (Graham et al. 2020)

For a flat universe (which our Universe is to high precision) this is equal to the so-called angular diameter distance, called so because it is the distance that satisfies the usual relation between distance $d$, size $D$, and angle $\theta$, namely $\theta = D/d$.

Relation between lookback time and distance

In every-day life, all these distance measures are the same, and in the Universe, for small distances they also coincide. But because of the expansion of the Universe, and because the Universe's components (matter, radiation, and dark energy) influence its geometry, as the distance of an object increases they become increasingly different.

You can find the equations here, or use a cosmological calculator such as Ned Wright's (as commented by Alchemista). Alternatively, you can calculate them in Python using the module astropy like this:

I used this to plot the current distance to GW190521 and other objects as a function of lookback time: 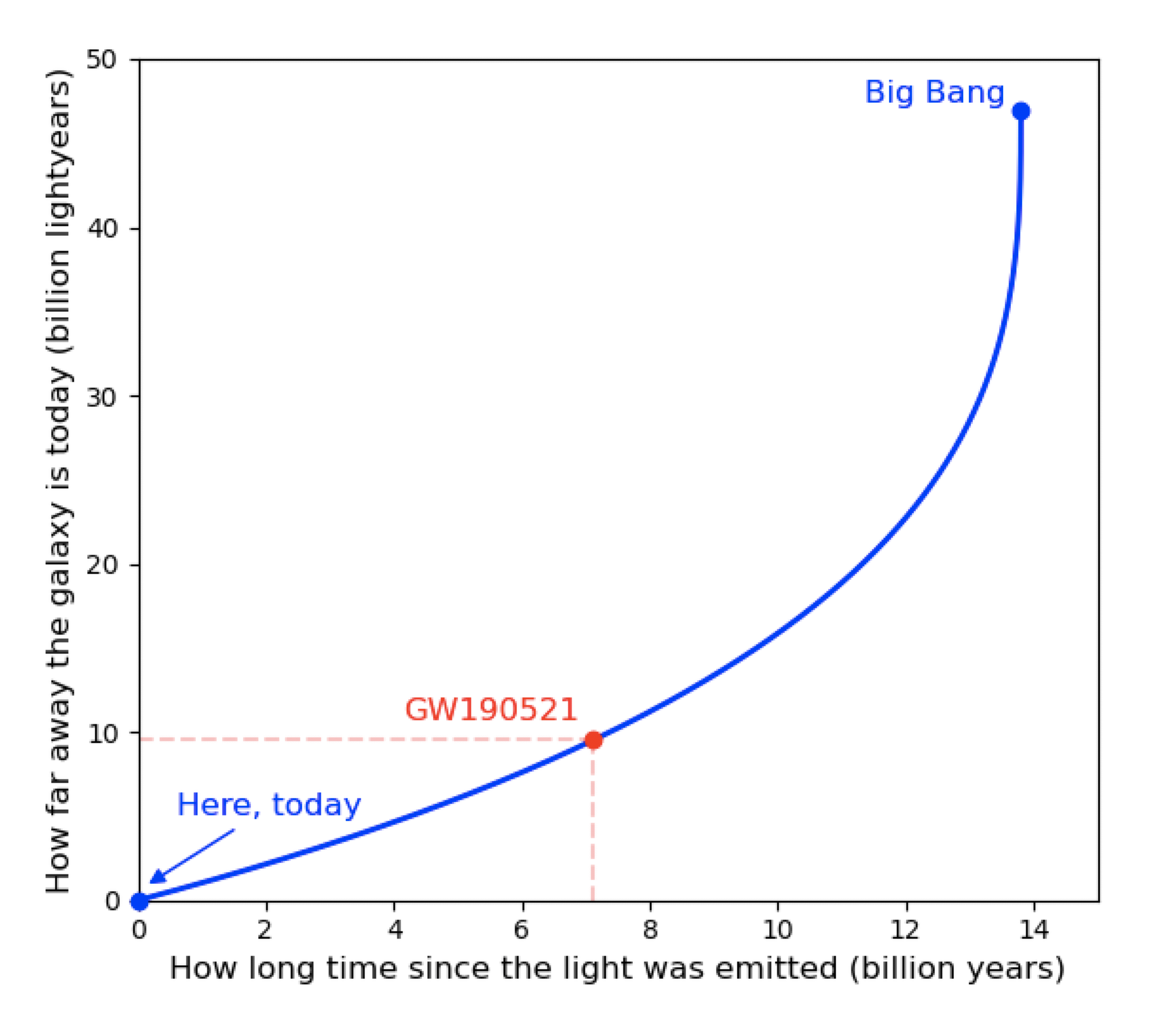 The answer to your title question

To answer the question in your title requires us to define exactly what we mean:

Not the answer you're looking for? Browse other questions tagged observational-astronomy cosmology expansion gravitational-waves .

0
Why does the Hubble flow does not carry photons with it?

0
Isn't the date of the Big Bang a bit bogus?
8
How far would EGSY8p7 be away now?
3
Is the rate of gravitational wave detection roughly what was expected?
4
Is the age of the Universe really 13.8 billion years?
1
Shouldn't the estimate of the universe's age be higher, not lower, after the attractive strength of gravity is taken into account?
8
How distant were the furthest currently-observable cosmic events when their currently-observed radiation was emitted?
5
How far away from us was Earendel star when it emitted the light that is just now reaching us?