Is the angular size of the black hole in the movie "interstellar" completely overblown?

I assume everybody is tired of reading questions derived from the movie Interstellar, I will try to keep this short and simple:

In general in movies, in order to have stunning visuals, celestial objects are displayed as if they were extremely close to the observers, having a enormous apparent angular size.

One striking example of this that has seems counter-intuitive, is the angular size displayed for the black hole "Gargantua" in the movie Interstellar. The characters in the movie are so close to it that it can be fully displayed in great detail (see attached image: Black hole seems to cover almost/over 90 degrees of the field of view..!)

Now, we can fully experience gravitational pulls from much smaller objects than a supermassive black hole in reality. The angular size of the sun and the moon are so small that we need telescopes to appreciate details, despite their gravitational effects dominating our everyday life.

It seems to me that a supermassive black hole would have such immense gravitational effects, that in order to be able to "freely" navigate around it (as done in the movie), observers would be so far away that the angular size of the black hole would be tiny (which would result in very non-spectacular cinematography).

The question is: Realistically, for a supermassive black hole ("with a mass of 100 million times of the sun"), what would be roughly its angular size when standing at a "safe" distance from it? 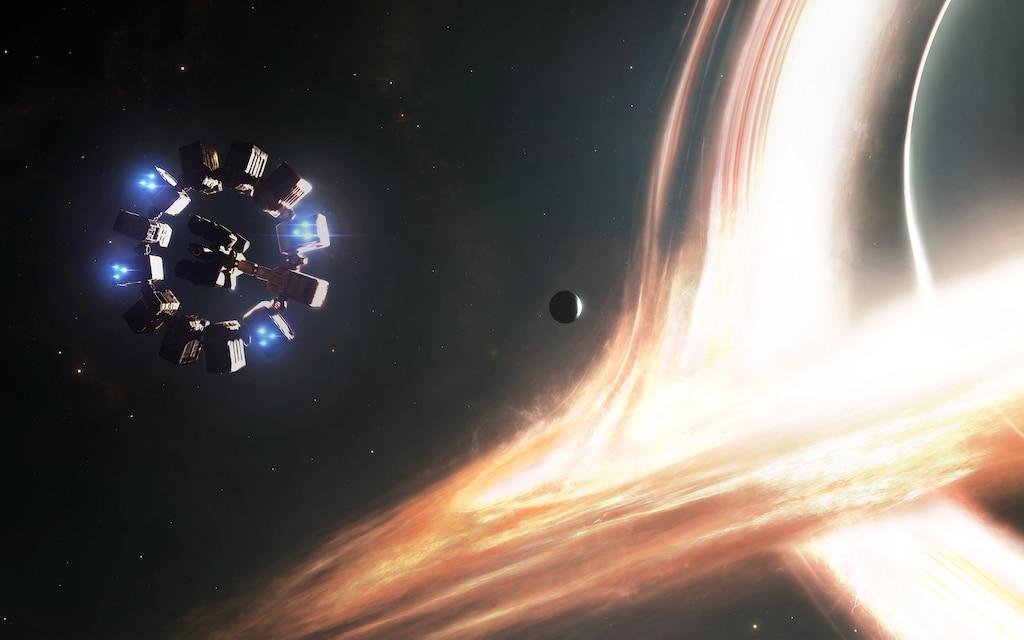 Assuming the spin parameter of the black hole is close to the critical value, it could be quite large.

The scenario of heating a planet orbiting close to a black hole via blue-shifted cosmic background radiation has been explored. The shadow of the black hole would take up a large fraction of the sky on such a planet, see for example figure 1 in Bakala et al. (2020). They find that for an Earth-like planet, the region where this can be achieved is located beyond the Roche limit (where the planet would be broken up) for black hole masses $M_{\rm BH} > 1.63\times10^8 M_\odot$. As shown in figure 6 of the paper, the bulk of this radiation will be in the ultraviolet, but there's probably enough visible light in the mix to make a bluish patch near the edge of the black hole shadow. Bear in mind that this would need to be a very isolated black hole, because stars would also be blue-shifted and therefore be extremely bright sources of high-energy radiation, which would be an extremely unpleasant environment.

The scenario in the movie includes an accretion disc, this scenario is considered in Schnittman (2019), who notes that for accretion rates low enough to produce the Sun-like colour of the radiation depicted in the movie, you'd have to be a long way out:

Regardless of the specific details—whether the planet is tidally locked or not, embedded in the disk or not—it is clear that for any planet to be habitable while also receiving its primary heating flux from a Novikov-Thorne type accretion disk, the planet either has to be extremely far from the black hole, or the mass accretion rate has to be an infinitesimal fraction of Eddington. This leads to an important inconsistency: The Novikov-Thorne model is predicated on an optically thick, radiatively efficient disk. At accretion rates down near $10^{-12} \dot{M}_{\rm Edd}$ the optical depth is unlikely to be large enough to allow the gas to cool, thus leading to a very hot, low-density accretion flow.

For a black hole, the event horizon's physical extent is defined as the Schwarzschild radius, $r_s$, given by the equation:

where M is the black hole mass, c is the speed of light, and G is the gravitational constant.

Therefore, given the above equation, the angular extent (in radians) of the black hole's event horizon is given by:

where the factor 2 comes from moving from radius to diameter.

Since you have fixed the mass of the black hole to $10^8M_\odot$, its angular extent is purely a function of observer distance from the black hole, as plotted below (in units of degrees): 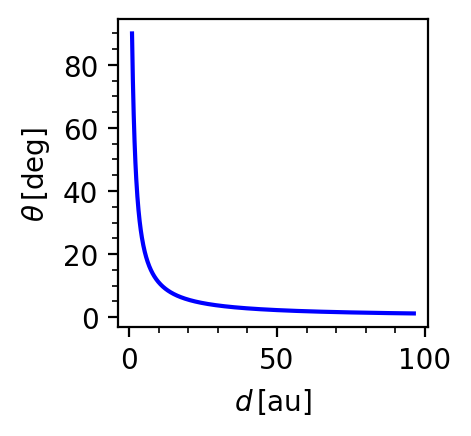 Therefore, with the black hole centred on our sun, the event horizon would be just inside the Earth's orbit. Meaning if the Earth was in the correct orbit, you'd be safe to observe the black hole. To put the angular extent further into context, if we were sat on Pluto at the farthest point in its orbit, the event horizon would be over 4 times larger than the full moon as seen from Earth!

So I'd say, given the apparent planetary orbits of Interstellar's exoplanetary system, Gargantua's extent is pretty realistic... Why there'd be a stable planetary system in orbit about a supermassive black hole in the first place is probably the more unbelievable bit!

PS - This answer disregards the accretion disc seen around the black hole and only concentrates in the angular extent of the event horizon.

Not the answer you're looking for? Browse other questions tagged black-hole supermassive-black-hole angular-diameter or ask your own question.

5
What's the largest angle that light has been "seen to bend" by gravity? (of one object by a separate object)