What shape do satellites trace as they wobble in orbit around another body?

What shape does the center of gravity of a satellite trace in 3-d space as it wobbles in orbit around another body? How is this shape modeled geometrically? Is it a topological torus? Is it feasible/useful to cross-section this shape at a right angle to the orbital path and graph the probability distribution of pathways in 2-d within the cross-section? Has this been done for the Moon around the Earth for example? That's a lot of questions but I think they're all closely related and the point is to obtain a conceptual model of orbit paths.

EDIT: The answers diverge so let me specify the question further. I have a vague recollection of the application of Lorenz Attractors to planet satellite paths. (This problem set is by the way one of the historical bases of chaos theory.) However, Lorenz Attractors are generally represented as full orbits in 3-d space, like so: 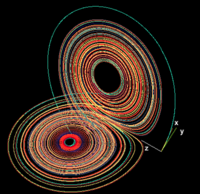 I'm trying to get to the 2d representation, if it exists, i.e. a 2d cross-section of the orbit paths, which probably do not fit in a disc, but in a torus, unlike the above image generated by a simple model. Might this cross-section look like a Hénon map?

Browse other questions tagged orbit or ask your own question.

16
Moon's orbit around the Sun