Did the night sky ever change in recorded history?

I wonder whether there has ever been a major change of the firmament in recorded history, like changes in the positions of stars, changes in constellations, or stars disappearing after going supernova. There've been visible supernovae but had the star in question been visible to the naked eye before the supernova? If so, how did it change what constellation?

There are a few ways to think about this question:

The Earth's axis mostly stays oriented in the same direction as we orbit the Sun. This is why we can get away with saying that Polaris is the "North Star" ... because it appears to be almost directly above Earth's North Pole regardless of what time of the day or night ... or what day of the year you choose to observe (it is roughly within 2/3rds of a degree from the pole).

But it turns out the Earth's axis does "wobble" like a spinning top. This wobble is very slow and takes thousands of years to complete a cycle (nearly 26,000 years). At the end of this century (roughly the year 2100) Polaris will be a little closer to the pole ... only 1/2° away from the true pole (today it is about 2/3rds° away from the pole). That is as close as it will get ... and then our pole's precession cycle will start taking it farther away from the pole.

This "precession" shift causes all stars in the sky to shift their position very slightly from year to year and it's mostly not enough to notice in a single human lifetime ... but it is easily noticed when measured across thousands of years.

There are other more subtle cycles, but Precession is noticeable across large amounts of time (thousands of years). The position of the Sun in the sky at the equinoxes changes every year and this causes the Sun to appear to be moving across the zodiac over thousands of years.

The sky has a coordinate system used to catalog the locations of stars and other objects. That coordinate system uses a "declination" to measure where a star is located relative to Earth's North/South ... it works much in the same way that latitude measures geographic locations on Earth. There is also a "right ascension" value that works a bit like longitude on Earth. Except Earth is spinning (and longitudes remain fixed to the planet) ... so we needed a way to mark a fixed position in space to have a sort of celestial longitude. That measurement is called Right Ascension and it needs a "0" position. So the zero position is established by the location of the Sun in the sky at the Vernal Equinox (the start of Northern Hemisphere Spring). It even got a name... the "First point of Aries" ... named because, when it was established a few thousands years ago, it was in Aries. Today ... it's migrated all the way over to Pisces (and is getting closer to the boundary of Aquarius).

These are changes caused by Precession and noticeable ... but mostly only when measuring over hundreds of years or thousands of years. It is actually noticeable just from year to year ... but only with precise measurements.

Precision causes the entire sky to shift in the same direction (and by a very subtle amount). This means that the locations of the constellations will shift ... but it wont explain changes to their shapes. For that, we have to look at other factors. In reality it isn't the "sky" that is shifting ... but rather the orientation of Earth's axis that changed.

Stars are moving ... and they don't all move in exactly the same direction. But the stars are so distant that the movement is mostly only noticeable with precise instruments. Regardless, they do move.

Here for example, is the Big Dipper asterism, but I've turned on Proper Motion vectors ... the vectors (shown in a light brown color) indicates the direction of that star's motion (relative to us) and longer vectors indicate great proper motion. 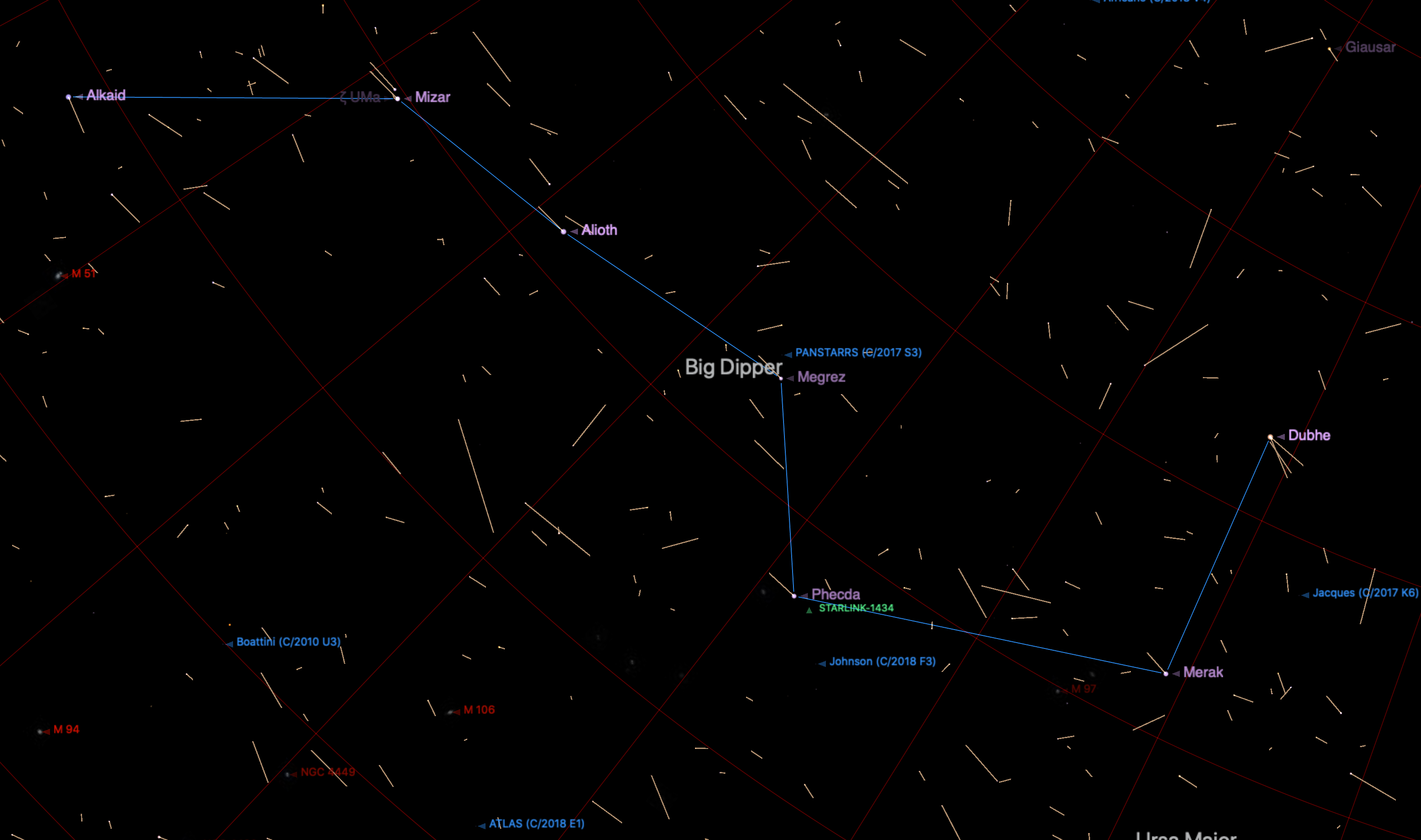 Notice that many of the stars of the Big Dipper are all moving in the same general direction at about the same speed ... including Alcor/Mizar, Alioth, Megrez, Phecda, and Merak. In this diagram, those stars are all moving up and to the left (relative to this frame).

But more importantly... notice that Alkaid and Dubhe are going in roughly the opposite direction. These stars are moving down and to the right. This means that over thousands of years, this asterism will become distorted and will eventually not resemble the "Dipper" shape anymore.

Incidentally, the stars in the dipper that are going in the same direction are all part of an Open Cluster called the Ursa Major Moving Group. It isn't as obvious that it's an open cluster because it is relatively close (not all stars in Ursa Major are members of the cluster.)

Stars that physically closer to our Sun will may appear to have much faster proper motion. It isn't so much that the stars are necessarily physically moving faster ... but since they are close, the changes are easier to spot.

Here, for example, is the proper motion of Rigel Kentaurus (aka Alpha Centauri). 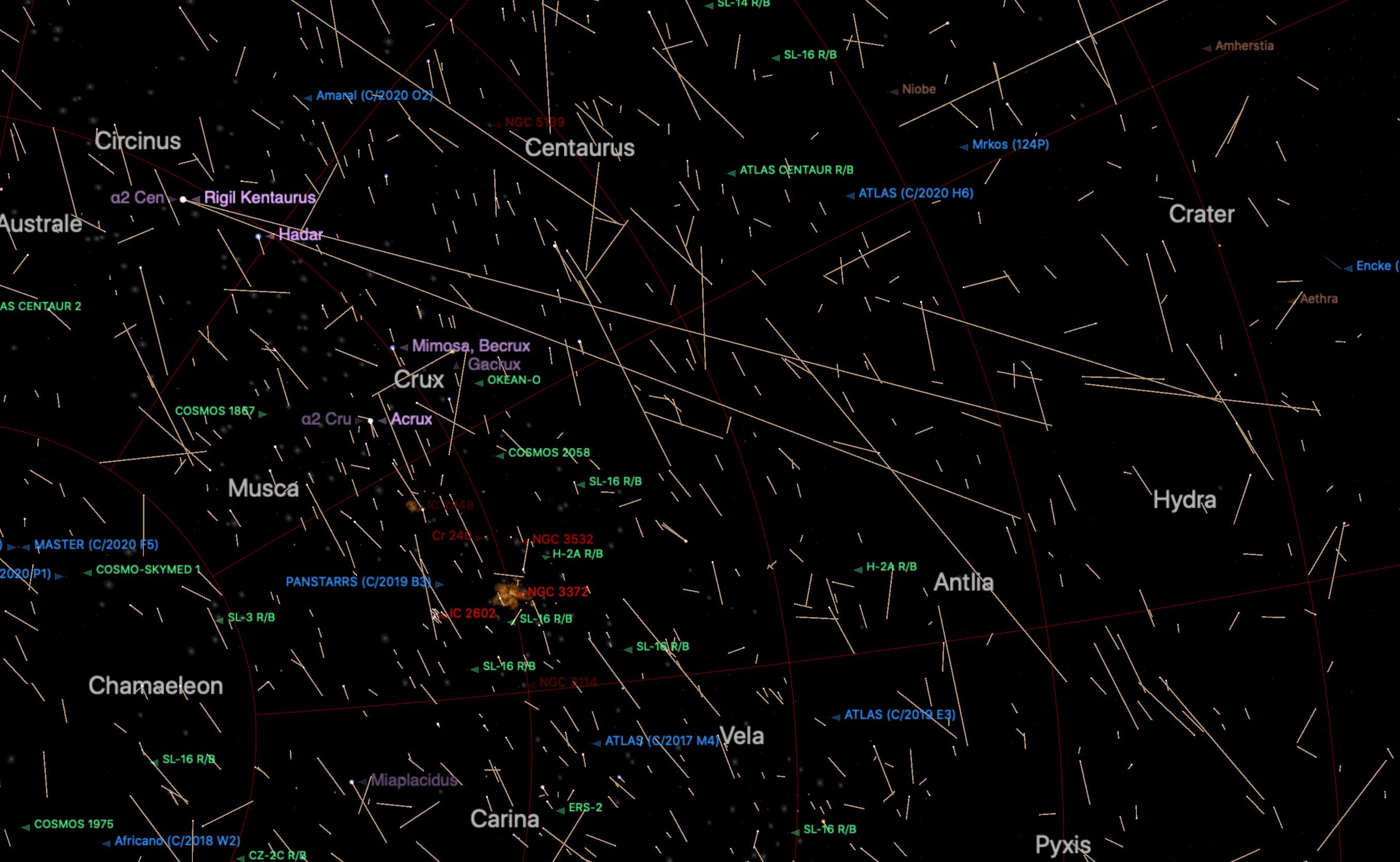 In this frame (current time) the star is in the upper-left section of this chart. It is in Centaurus (hence its name) but near Circinus. But notice it has a VERY long proper motion vector which is headed toward the right side of this chart in the direction of Hydra.

Its proper motion vector is much longer than the other stars ... but Rigel Kentaurus is just a little over 4 light years away (one of our closest neighbors) -- so its relative motion is more noticeable.

While Rigel Kentaurus makes the top-20 list for stars with the highest proper motion, it's not the winner ... that spot goes to Barnard's Star (in Ophiucus). But Barnard's Star isn't very bright... at magnitude 9.5 it isn't noticeable to ordinary human vision and requires a telescope to see it. But it is moving just a little under 3x faster than Alpha Centauri A & B.

Certainly events such as bright comets would change the sky -- but those aren't stars. Super-Novae events, on the other hand, are stars ... and these are easily noticeable if they happen in our home galaxy. They don't happen very often. The estimate is that, on average, they happen in a galaxy our size about once every hundred years. But's not like a clock where they happen with periodic regularity ... huge amounts of time may pass without any of them ... and then several could occur timed much closer together.

Since Super-Novae events can be quite bright, they can even be visible in the daytime sky. They don't last particularly long ... they quickly brighten up ... then begin to dim over weeks and ... after a few months they may no longer be noticeable (but they will leave behind a Super Nova Remnant -- deep sky nebulae such as the Crab Nebula and Veil Nebula are examples of Super Nova Remnants.)

I don't see a mention yet of variable stars. There are stars whose brightness, as observed from earth, changes to an extent noticeable to naked-eye observers. The first two that we know historical people noticed provide examples of the two main types.

Algol, in the constellation Perseus, is an eclipsing binary where a dim companion periodically blocks some of the light from the brighter star. Its brightness (as observed from earth) varies from magnitude 2.1 to 3.4 over a time scale of days. The light output of the group of stars does not change, but the amount of light that reaches us changes enough to be visually detectable. See the Wikipedia article https://en.wikipedia.org/wiki/Algol
Note, that this same effect is used to hunt for exoplanets - as the planet periodically blocks some of the light from the start; but to detect planets, this requires exquisitely sensitive instruments.

Mira, in the constellation Cygnus, is a variable star whose brightness ranges from about 3.5 or 4 to 14 - that is easily visible to needing a very good telescope to detect it - over a period of months. The actual light output by the star varies over time. See the wikipedia entry at https://en.wikipedia.org/wiki/Mira Note that this star's output actually pulsates as it varies in brightness.

To quote the first little bit of a long Wikipedia entry on variable stars:

So, you can see that besides planets, comets, and novae, variable starts have been observed for hundreds of years, maybe thousands.

The axial precession precession of the Earth has a relatively short cycle of about 25,000 years, which made Beta and Gamma Ursae Minoris the "twin pole stars" to ancient Egyptian and Chinese astronomers.

If a star bright enough to be notable to ancient astronomers had gone supernova, the brightness of the explosion would have been much much larger than what we have on record.

Not the answer you're looking for? Browse other questions tagged amateur-observing history night-sky or ask your own question.

18
How are constellations intact if the stars are rotating around galactic nuclei?
25
Are there any double stars that I can actually see orbit each other?
11
How much does the sky change in a few thousand years?

1
Can someone help me to identify this section of the night sky?
6
Is there an example of a star that is already dead, but can still be seen on Earth?
4
What did the night sky look like 100,000 years ago?
4
Tycho Brahe's model
11
How much does the sky change in a few thousand years?
6
Is the Object in this Photo Mars?
3
Why does light pollution make the night sky completely black without stars?