Why is there a zig-zag in elemental abundances?

In this answer to Is lithium considered a metal in astronomy? this image from Wikimedia of the abundances of elements in the universe was shared:

I thought it was fascinating that there is a near-constant zig-zag of abundancies.

Are these values accurate, and if so, what would cause this zig-zag?

If a nucleus is going to have significant cosmic abundance, it must be either absolutely stable or at least have an extremely long half-life. This is more likely to happen when Z is even (and also when N is even).

Stability also effects probabilities of different types of decay. E.g., if a nucleus can undergo both beta+ and beta- decay, then it is usually more likely to do the decay that results in the more stable daughter.

The zig-zag is a nucleosynthesis artifact.

H, He and Li are "primordial" (made out of the abundant neutrons in the first hours after the Big Bang.)

Everything else is made in the stars.

There are a few main processes that make heavier elements (oversimplified!):

Edit: Both s- and r-processes, as well as other ones not listed here, leave ultimately more even elements as they are in general more stable against both beta-decay and capturing the next neutron. Why they are more stable? Because both protons and neutrons fill their very own shell-like orbitals inside the nucleus and nature favors packing nucleons in pairs of anti-parallel spins. (electrons as well!) See Nuclear shell model

A very informative, short, You Tube video discusses this - see the 4:20 mark.

Apart from hydrogen, helium, lithium and beryllium, all the elements were formed as the products of fusion in stars.

The zig-zig pattern might be related to Oddo-Harkins rule. It states:

An element with an even atomic number is more abundant than both elements with the adjacently larger and smaller odd atomic numbers.

But there are many big exception to this rule. One of the exception is hydrogen-helium-lithium-beryllium.

This is complementary to other answers and not intended as a full answer in its own right.

I saved the diagram below to disk in March 2009 - source not (yet) known.
Update: Wikipedia :-) - with an excellent discussion of the reasons for the variations in the terrestrial versus universe wide distributions here

This shows elemental abundance in the earth's elemental crust rather than in the universe.
It will be seen that the clear "zig-zag" in the original diagram is not as clear cut here and that some relative ratios are substantially different.
The reasons given for the zig zag shape remain the same but having a partial sample of conditions at the bottom of a tectonically stirred, atmosphere and ocean covered gravity well probably go a long way toward explaining most of the differences.

The thin shell of biosphere probably help account for some of the differences in eg O & H ratio and abundance.

Pb : Bi: Th : U are much the same, but (sadly) the rarest metals are 2 to 3 orders of magnitude down in abundance - but this suggests that asteroid mining may yet prove 'interesting'. 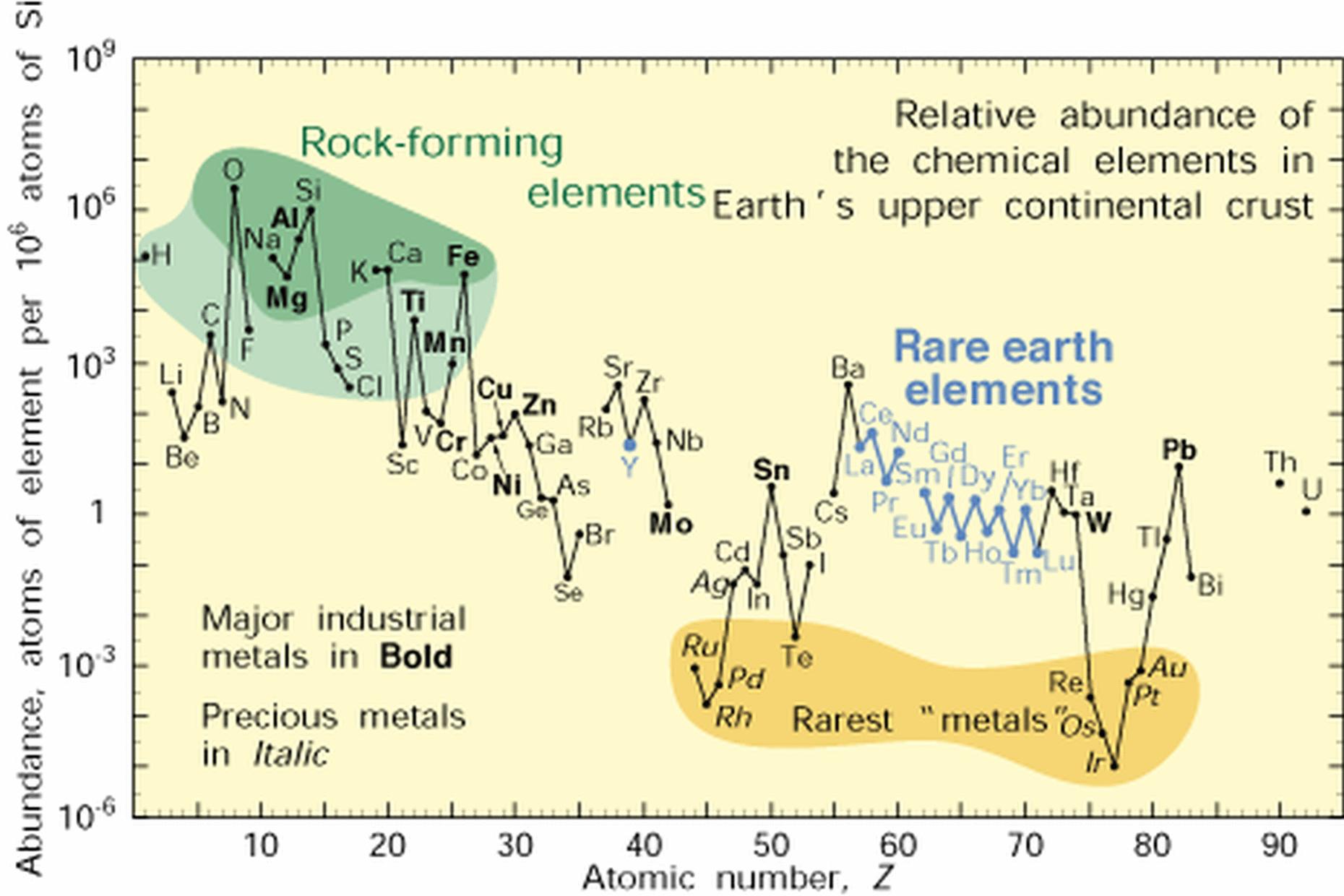 Versus original from above:

Not the answer you're looking for? Browse other questions tagged elemental-abundances or ask your own question.

26
Is lithium considered a metal in astronomy?

3
How are stellar elemental abundances quoted?
12
Why is carbon so rare on the Moon and on Mars?
12
Why argon instead of another noble gas?
4
How are the element abundances calculated for a meteorite in the Hydrogen log10 scale?
4
Why are certain elements so common?
6
Why are O III lines so prominent in the spectra of emission nebulae when the amount of oxygen relative to hydrogen is a million times smaller?
1
Can you recommend a book about big bang nucleosynthesis and chemical abundances?
0
Why is the carbon/oxygen ratio at low metallicities important to study?