What would a moon with a six-month orbital period look like from the earth?

This is a kind of follow-up question to "What orbital period would produce one New Moon (and one Full Moon) each year?"

Given the six-month orbital period that is needed to produce one New Moon and one Full Moon each year, what would such a satellite look like as it made its progress through the sky (assuming we are in a system that is as close to our current situation as possible)?

Grateful for any insights here.

A moon with a sixth month period would be about 1.3 million km from Earth. That puts it close to the edge of the Earth's Hill sphere, and probably isn't stable in the long term. So the biggest thing you might notice is "goodbye moon" (and having the moon in an Earth crossing orbit wouldn't be pleasant in the longer term, a collision would melt the crust)

Below is a five-year simulation of fictional circular orbits of Venus, Earth, Mars and Jupiter-like objects and two Earth moons with a period of 0.5 years; one prograde and one retrograde.

Earth's orbit is the ecliptic, all planets have inclinations of 10 degrees, moons are slightly split at 19.5 and 20.5 for visibility.

We see the familiar switch back and forth between apparent prograde and apparent retrograde motion against the stars for the planets, but the moon just moves smoothly in its inclined orbit.

Basically a 1/2-year moon would behave just like the 1/13-year moon we have now except do it more slowly and in apparent synchrony with the Sun.

There would be nothing otherwise remarkable or interesting except for the annual or tri-annual nature of its phasing with respect to the seasons. 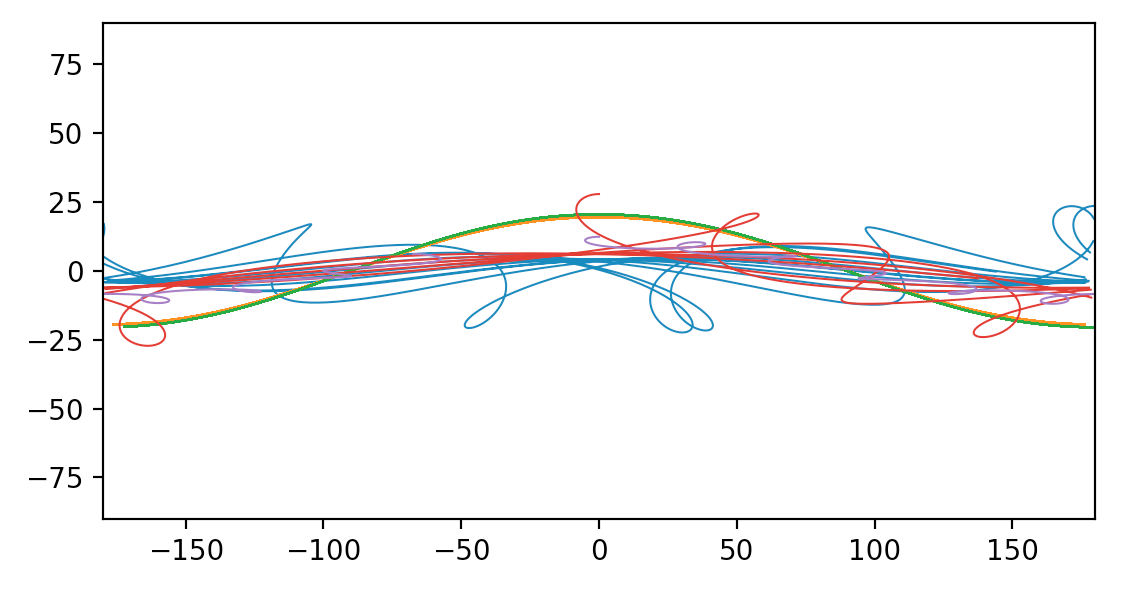 10
What orbital period would produce one New Moon (and one Full Moon) each year? What other effects would this produce?

3
What does the orbit of multiple star systems look like?
2
2 Earth-like planets in co-orbital configuration
7
Is there a timekeeping word for the orbit of a moon?
5
How can a rotation period of a planet's satellite/moon be "chaotic" (like Hyperion around Saturn)?
4
What is wrong with my calculations of Venus' orbital period?
1
How to find the Orbital Period of two Binary Planets around a Single Star?
10
What orbital period would produce one New Moon (and one Full Moon) each year? What other effects would this produce?
1
What would be the year length of a habitable planet of 40 Eridani A?
5
How to calculate eclipses on a planet in a binary star system