Forms of stellar orbits around the galactic center

Do all stars in orbit around Sagittarius A have approximately circular orbits or are there stars that orbit the Milky Way center very elliptically, like being in the Milky Way's outer rim at apoapsis and in the core worlds close to Sagittarius A at periapsis? Do we know what orbital eccentricity the Sun (respectively the Sun-Jupiter barycenter) has?

I'm not sure what the focus is on Sgr A*? Only the stars that are very close to the Galactic center can be said to be "orbiting Sgr A*", the rest of the stars in the Galaxy orbit in the the entire Galactic potential, to which Sgr A* is a minor contributor.

The stars near Sgr A* have a wide variety of orbital eccentricities. This is shown clearly in the picture below (credit: Cmglee, Wikimedia commons). 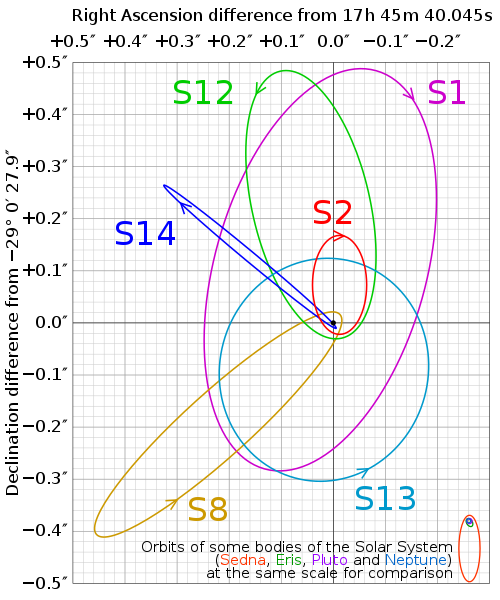 Stars in the Galaxy at large also show a variety of orbital eccentricities in their non-Keplerian orbits. The orbits are non-Keplerian because they are not orbiting a point-like source of gravity and the orbits do not form closed shapes.

Many, in fact most, of the stars near the Sun are in the Galactic disc population and have roughly circular orbits, confined close to the plane of the Galaxy. About 1% of nearby stars are part of the old halo population which have a wide dispersion of eccentricities and orbital inclinations.

Not the answer you're looking for? Browse other questions tagged galaxy milky-way orbital-elements sagittarius-a or ask your own question.

28
How far is the Earth/Sun above/below the galactic plane, and is it heading toward/away from it?
16
What are "non-Keplerian" orbits? What are some familiar examples in our solar system, and can some still be closed?
10
Best approximation for Sun's trajectory around galactic center?

28
How far is the Earth/Sun above/below the galactic plane, and is it heading toward/away from it?
10
Best approximation for Sun's trajectory around galactic center?
8
What is the shape (along the plane, not up-down) of stellar orbits in flat spiral galaxies
4
Can one approximate the semi-major axis of an orbit as the average orbital distance for eccentric orbits?
12
What will happen to the shape of a galaxy when a super massive black hole lying in its center dies(evaporates out)?
2
What is the range of the zenith angle between velocity and position vectors?
47
Does the Milky Way orbit around anything?
13
Is it true that we see the center of the milky-way for only half of the year?
6
Cannot identify mistake in calculating orbital eccentricity vector; magnitude equals one instead of zero (with python code)
2
Is Jupiter really shepherding the main belt, and Neptune the Kuiper belt?