What are "non-Keplerian" orbits? What are some familiar examples in our solar system, and can some still be closed?

This excellent answer to Forms of stellar orbits around the galactic center invokes the following concepts:

I have a fairly good idea what these mean and so might many of us, but our ideas may not overlap completely.

For the sake of future stack exchangers and orbiteers, how can we best define these?

Included should be the understanding that we're talking about soft limits here; no orbit is exactly Keplerian because gravity goes everywhere (there are no "gravitational dielectrics" or opposite charges for field lines to terminate). But for practical purposes we can treat many orbits as Keplerian for many purposes, and some we can't at all.

Newton proved that Kepler’s laws would perfectly describe planetary motion using an inverse r-squared law for gravitational force if the planet’s mass was negligible with respect to the sun’s mass, if the only gravity the planet was subjected to was the sun, and if the planet hadn’t achieved escape velocity.

Does that mean we should stop using Kepler’s laws? Heck no! They are super useful for all kinds of things. As an example, I give the only rigorous answer to this question using Kepler’s 2nd and 3rd laws (in the paragraph just before my notes): If the Moon were impacted by a suitably sized meteor, how long would it take to impact the Earth? . This question was around for over a year, and many people had taken a crack at answering and failed (in my opinion). My solution is much less complicated than another clever physics answer that assumes gravitational force is constant only to get a lower bound!

A "non-Keplerian" orbit is an orbit in which Kepler's laws lack predictive and descriptive power. If a question about an orbit requiring a specified accuracy can’t be answered with the required accuracy using Kepler’s laws, the orbit is ‘Non-Keplerian’ in the context of that question. This is probably not a very satisfying answer, especially since the same orbit could be considered Keplerian for one question, but not for another. Unfortunately, this is typically how engineering gets done. We may make some assumptions to get to an answer and then refine that answer by reversing those assumptions or using a more sophisticated model. When Kepler’s laws fail to give us required accuracy, we can move to orbit propagation simulations.

Kepler’s laws were written specifically for the motion of planets around the sun! So one could argue that a moon orbit around a planet is not a Kepler orbit, even though Kepler’s laws may still be very accurate if you replace “planet” with “moon” and then replace “sun” with “planet”. I would rather argue that any orbital system is “Keplerian” if Kepler’s laws still accurately describe the objects’ motions.

Kepler’s laws don’t include the concept of a barycenter (system center of mass). So they degrade for 2-body orbits when there isn’t very much difference between their mass. A comment below says that a binary star system is an ‘almost perfect example of Keplerian behavior’, but I disagree. One has to generalize Kepler’s laws to accurately describe binary star motion:

a) Orbiting bodies move in elliptical orbits around the system barycenter.

b) A line segment between the barycenter and a body sweeps out equal areas in equal time.

c) The square of a body’s orbital period is proportional to the cube of its mean distance from the barycenter.

Here is a table I made to accompany my definition of non-Keplerian orbits: 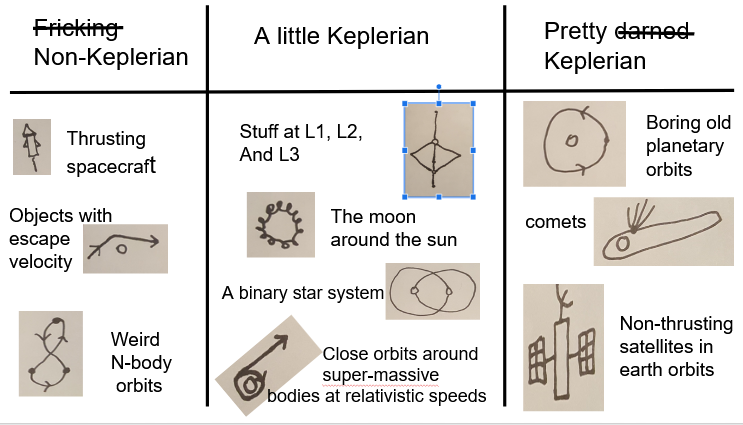 I think the easiest example of a mostly non-Keplerian orbit is the James Webb telescope soon to be at Earth's L2 point: https://en.wikipedia.org/wiki/Lagrange_point . Kepler's 3rd law states that the ratio of the cube of the orbit SMA (semi-major axis) to the square of the orbital period is constant for everything orbiting the same massive body. But something in Earth's L2 point has the same orbital period as Earth, but a way larger SMA. Kepler's 3rd law is violated, hence the James Webb telescope will be in a non-Keplerian orbit. If you want a more exotic orbit and a naturally mostly non-Keplerian orbit, take a look at this weird orbit for a retrograde Jupiter coorbital asteroid: http://www.astro.uwo.ca/~wiegert/2015BZ509/ This is an example of a 3-body problem orbit.

Yes, the two orbit examples given above are closed enough. Oumuamua is an example of a "non-closed" "non-Keplerian" solar orbit. https://en.wikipedia.org/wiki/%CA%BBOumuamua

What exactly are "non-Keplerian" orbits?

Strictly speaking, all orbits are non-Keplerian. In practice, one can model some orbits as basically Keplerian, but with perturbations. Sun synchronous satellites are one example of orbits that are close to Keplerian, but not quite so. The Earth's equatorial bulge makes satellites fail to orbit in a plane. Sun synchronous satellites take advantage of the precession induced by the Earth's equatorial bulge so that their orbits precess by 360° in one year. Connor Garcia's example of satellites in pseudo-orbits about the Sun-Earth linear Lagrange points form another set of examples.

What are some familiar examples of distinctly non-closed orbits in our solar system?

What are closed orbits?

Bound orbits are orbits that stay bound to some central object. Parabolic and hyperbolic trajectories are not bound. Closed orbits are bound orbits that repeat their path. Any attractive central force law can result in circular orbits. These are trivially closed. There are only two attractive central force laws that can result in closed noncircular orbits: An inverse square law (e.g., Newtonian gravitation), and a linear force law (e.g., a Hookean spring). This is Bertrand's Theorem.

What are some familiar examples of distinctly non-Keplerian orbits in our solar system?

Can some non-Keplerian orbits still be closed?

Other than a Hookean spring, no.

In all the existing coordinate systems I am aware of, no orbits are strictly Keplerian. But perhaps in an Earth Centered coordinate system, one could say that the Earth's orbit is closed, since the Earth, by definition, is unmoving at [0,0,0].

Throughout history, CS (Coordinate Systems) have been a huge bone of contention. Einstein said:

Can we formulate physical laws so that they are valid for all CS?... The struggle, so violent in the early days of science, between the views of Ptolemy and Copernicus would then be quite meaningless. Either CS could be used with equal justification. The two sentences, 'the sun is at rest and the Earth moves', or 'the sun moves and the Earth is at rest', would simply mean two different conventions concerning two different CS.

On a practical level, I think it is convenient to treat some orbits as Keplerian, since we can answer a lot of questions quickly and accurately off the 'back of the napkin' using Kepler's laws. As inspiration from Ptolemy, Kepler, and Einstein, I wondered if a coordinate system could be imagined in which every orbit is perfectly Keplerian and closed. The following is the result:

The Moon's orbit around the Earth is Keplerian and closed.

In order to track and quantify the motion of celestial objects, we define coordinate systems. Our choice of coordinate system is typically made to ease the calculation complexity for a particular problem. For example, Earth satellite calculations are often performed in an ECI (Earth Centered Inertial) coordinate system. That means the origin of the system is the center of the Earth, and the Earth rotates in place about the origin. This is a convenient system to study the motion of Earth bound satellites, since it is consistent with Kepler’s laws for Earth satellites, including the Moon. ECI:

In some cases, it's convenient to use an ECEF (Earth Centered Earth Fixed) coordinate system. This coordinate system fixes the rotation of the Earth, so the axes don't change with respect to the Earth’s surface. This is a convenient system for space launch since the coordinates of Earthed based sensors don’t change. ECEF: 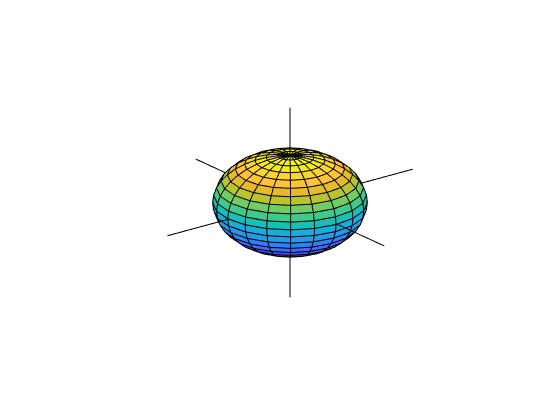 In order to ‘fix the Moon’ in our ECMF coordinate system, we have to account for the variations in lunar distance due to the eccentricity of the orbit. If we switch from cartesian coordinates to polar coordinates, we see that we can set r, the distance from the Earth to the Moon to be equal to $k=500,000km$. ECMF (not to scale):

The ECMF coordinate system has some really bad qualities. It non-uniformly stretches the rest of the universe based on time. Depending on the direction, light no longer travels in a straight line! Regular shapes in ECEF become irregular in ECMF. The z-axis becomes irregularly offset from the Earth's rotation axis within the range of the Moon's inclination from the equatorial plane. All kinds of bad stuff happens in ECMF.

From the ECMF coordinate system, we can make another coordinate system called a ECMFDR (Earth Centered, Moon Fixed Distance, Rotating) system. This coordinate system just rotates the ECMF system around the z’-axis so that a full revolution takes 1 year, or $p$. To translate a point P = $\alpha', \beta', d'$ from ECMF to ECMFDR, $\alpha’’=\alpha’$, $\beta’’=\beta’+2\pi(t-t_0)/p$, and $d’’=d’$. ECMFDR (not to scale):

In our usual ECEF system, the moon’s orbit is not quite Keplerian. Instead, it's perturbed by the irregular shape of the earth, it's perturbed by other gravitational bodies in the solar system, and it's slowly spiraling outward, away from the Earth. In the ECMFDR system, the moon is, by definition and construction, in a perfectly circular orbit which is both a Kepler orbit and a closed orbit.

If we can create this coordinate system for the Earth and the Moon, then we can generalize it to any pair of orbiting bodies.

Then $b_2$’s orbit around $b_1$ is Keplerian because it complies with Kepler’s 3 laws,

Not the answer you're looking for? Browse other questions tagged orbit gravity orbital-mechanics orbital-elements terminology or ask your own question.

25
If the Moon were impacted by a suitably sized meteor, how long would it take to impact the Earth?
20
If suddenly "knocked" or perturbed from its orbit, would gravity eventually return the Earth to its original orbit?
9
Does a parabolic trajectory really exist in nature?
8
Why are the ALMA receivers' ADCs only 3-bits?
6
Forms of stellar orbits around the galactic center
3
If an orbit is shifting due to orbital precession, is it still a Keplerian orbit?
6
How does ALMA produce stable, mutually coherent ~THz local oscillators for all of their dishes?

6
Are there sufficient observational data to measure non-Newtonian perihelion advances of any Asteroid and Comet orbits?
2
What is the term for astronomical objects outside the solar system that are smaller than dwarf planets?
7
How is it that all planets (and moons) in our solar system are in equilibrium orbits?
5
Are meteors and meteorites considered "Small Solar System Bodies"?
3
How can we map masses orbiting the outer Solar System by determining the orbits of planets and smaller objects?
3
Are the planets in our solar system in free fall?
6
What are other names for planetoids that aren't orbiting a solar system, but hurtling through space?
5
How to calculate eclipses on a planet in a binary star system
3
What are the values of the Mean Anomalies of the planets in the Solar System?