Does the sun's rising/setting angle change every few months?

When I lived in Darwin, Australia, I noticed that the Sun set in a slightly different direction to the West. In the evenings, I used to sit on a couch and watch TV. There was a huge window to my right and the setting sun would always shine bright into my face. So I moved a single vertical blind to block it out just about right. In the months of October/November I started noticing the sun shining into my eyes again. Neither the couch nor the blind had moved. After moving the blind again to block the sun, in a few months I would have to move the blind again. I was living alone and there is no way the blind or the couch would move.

When I lived in Canberra, Australia, I had the habit of stepping out of my house early in the morning. I would face the sun as soon as I stepped outside because it was too cold and I wanted the warmth of the sun on my eyes/face. I noticed again in October/November that my usual position of facing the sun was wrong. The sun would rise from a slightly different angle. So if earlier the sun was rising at 130 degrees from my door, it would now be rising at 110 degrees. The door faced the southeast, and because of the very narrow path and vegetation from my door I am very certain of my positioning.

I really don't know what this phenomenon is called. When I lived for so many years in other countries, I never noticed this. Am I just being silly or does the Sun rise/set differently every so many months?

The Sun rises and sets at a different point on the horizon every day. The change is small, so without careful observations, it may take several days or weeks to be fully aware of the change. Mathematically, the position of rising/setting can be found from the following formula: $$\cos(\theta) = -\frac{\sin(declination)}{\cos(latitude)}$$ where

At latitudes closer to the equator (0° latitude), the difference is smaller. The range is approximately 47° along the horizon when at the equator. At latitudes closer to the poles, the range becomes larger. At the Arctic and Antarctic Circles, the range is the largest that it can be: 180° (at least mathematically). At these high latitudes, the diameter of the Sun and refraction become important to calculate the precise location of rising.

You're not silly1, it certainly swings back and forth (North and South) one full cycle every year. It's directly related to why days are longer in the summer and shorter in the winter.

I am no expert, but some say that Stonehenge and other ancient "observatories" are supposedly set up to do exactly what it is you do, except much more carefully and quantitatively, to time things like crop plantings.

One example in Australia is Wurdi Youang, and the drawing below nicely highlights exactly what you are describing! 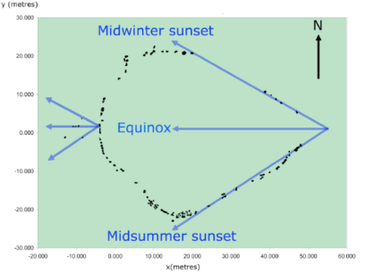 This answer is a supplement to the existing answers.

I looked around for nice graphs showing the sunrise azimuth over the year for various latitudes, but I couldn't find anything suitable. So I just wrote a couple of small Python scripts, using Sage / Matplotlib to do the plotting. 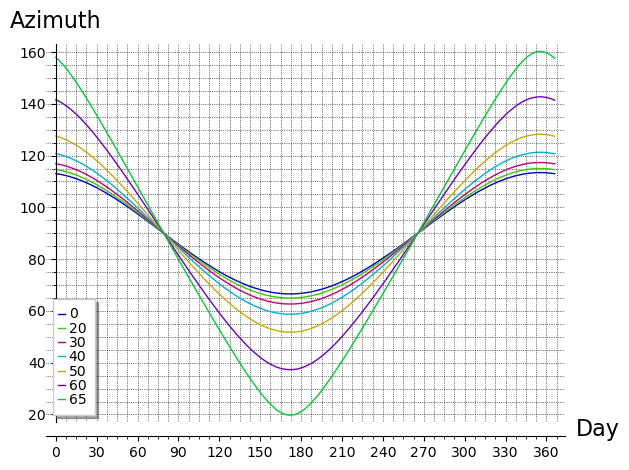 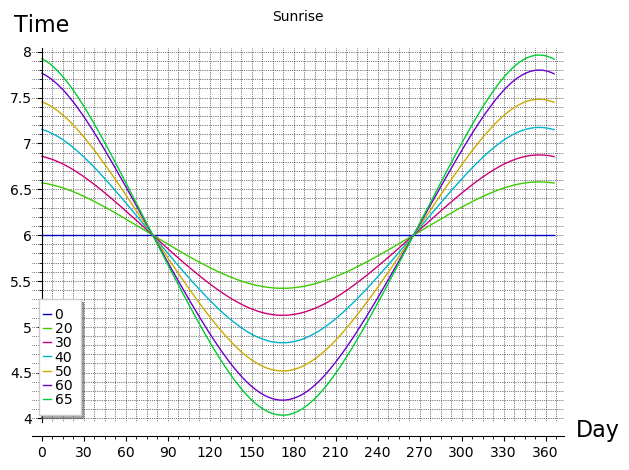 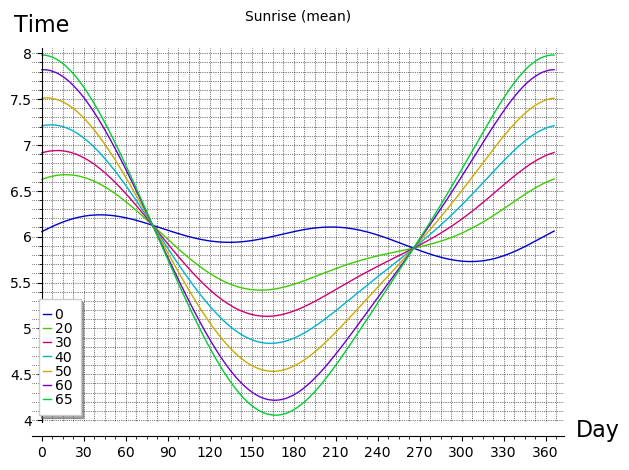 You can play with the azimuth plotting script on the SageMathCell server here.

The script is actually encoded in the URL. It's a bit cryptic & terse to save space. Just type a comma-separated list of latitudes into the box & it'll plot the corresponding curves.

Hopefully, I haven't made any coding or algebra errors. ;) I used the azimuth formula given in John Holtz's answer, and I got the declination equation from Wikipedia's article on the Position of the Sun, modified to use slightly more accurate values for the obliquity of the ecliptic and the Earth's orbital eccentricity. In the script,

Here's a simpler version, which just plots a single curve.

This script's for the mean sunrise times. And here's one for the Equation of Time, the previous script uses the formula from this one to convert apparent time to mean time.

Those curves are calculated for an observer at longitude 0° (pretty much), but they're accurate for any longitude. (At any given longitude there's a small displacement that's almost constant over the year, apart from effects due to the variations in the Sun's speed along the ecliptic, aka the Equation of Time). They do not account for the observer's height above sea level (and hence the distance to the horizon) or the angular size of the sun, or atmospheric refraction: I just wanted to show the general trend. But as John Holtz notes, refraction does have a noticeable affect on sunrise time and the Sun's apparent altitude, especially at higher latitudes, where the Sun makes a lower angle to the horizon.

If you ask those scripts to plot curves for latitudes in the Arctic or Antarctic circles, they will do their best, but will print error messages warning that they couldn't plot some points. I didn't want to waste space in the scripts handling days when the Sun doesn't rise. ;)

The Sun does indeed drift across the sky throughout the year, not only rising higher in the summer and lower in the winter, but also varying along an east-west axis. This can be shown by observing the Sun at the same time each day throughout the year, and seeing that it changes position. This shape is called an analemma, and is a result of the earth's axial tilt and orbital eccentricity around the Sun.

Here's a diagram showing the position of the Sun at noon throughout the year, as observed from the Royal Observatory in Greenwich. Most people are aware of the change in altitude between summer and winter, but the fact that the angle of the sun varies side-to-side may be less well-known. 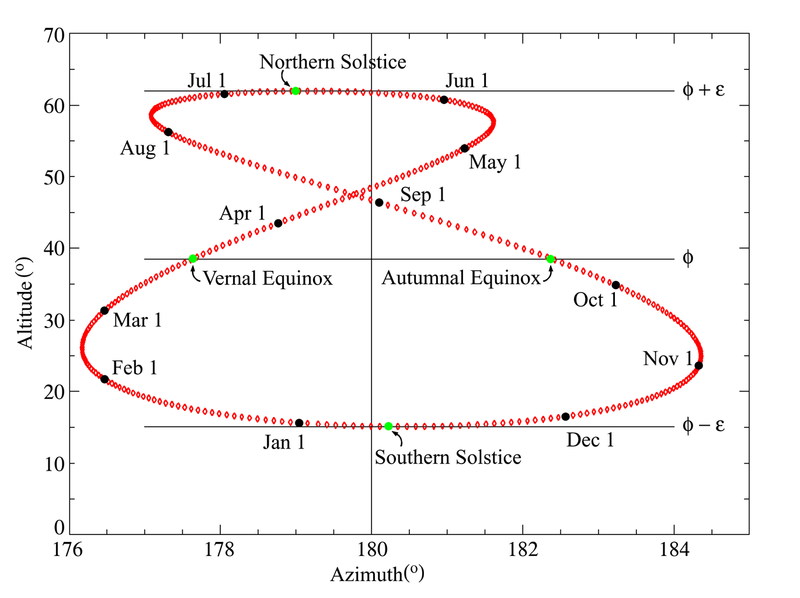 Now, this figure shows the position of the sun at a fixed time of day over the course of the year. But the question relates to the position of the sun at sunrise, which is clearly not fixed throughout the year. To answer the original question of if the sunrise "moves", you can imagine drawing an analemma for any time of day - let's pick a time that's before sunrise for part of the year, and after sunrise for another part of the year (let's say 6am). In this case, the whole curve shifts downward, and the bottom part of the analemma drops below the horizon, showing that indeed, for some parts of the year, the sun will be visible at 6am, but at other parts of the year, the sun will not be visible at 6am. Furthermore, we see the curve drop below the horizon at two different spots - this shows that there are two dates at which sunrise is at (approximately) 6am, and that the sun will rise at different azimuth on those days.

It's a little more complicated if we want to draw the "sunrise analemmas" over time, since we'll have a figure-8 shape that drifts upward as sunrise becomes earlier, following the position of the sun as it moves across the sky. It's not as easy to visualize, but that series of analemmas will drop below the horizon at different points, showing that the sunrise does move throughout the year. This shape, which is traced out by the intersection of a series of analemmas with the horizon, is not an analemma itself. The example of two dates with the same sunrise time is much easier to visualize with a single analemma.

I hope someone can come along and make this more precise, but I'm pretty sure the effect is greater the further you move away from the equator. So it would be more noticeable in Canberra (35° S) than in Darwin (12° S). Do you know the latitudes of the previous places you lived?

2
Why does sun rise further north of where it does any other time of year? I know rises differently depending on the season but this is like never seen
5
Does the sky get darker faster during the winter?
2
Does the Time of Sunset (Sunrise) Change Over Time Given a Fixed Location and Consistent Atmospheric Conditions?
1
Is there a formula to calculate the angular speed at which the Sun apparently moves around the Earth?
1
How to find a direction given the sunset
0
What is the formula to input date, time and longitude. Where I can get latitude of the civil twilight back?

5
How many minutes does a sundial change every day?
5
Does the orbital variation in planetary gravity affect the Sun's corona
13
What does the Sun's orbit within the Solar System look like?
2
As the Sun dies, does the Earth's orbit change?
9
Why does the Sun's surface contain lithium?
0
Does the Sun's atmosphere have a scale height?
2
what degree in the sky does the sun change color?
4
Does the earth spiral around the sun's movement/motion path?
2
Does the Time of Sunset (Sunrise) Change Over Time Given a Fixed Location and Consistent Atmospheric Conditions?
4
Rising and setting time of planets in relation to the sun