Why are only the poles of Mars frozen, despite too cold temperatures on lower latitudes?

Actually the entire red planet is very cold, cold enough for ice and frost to form not only on the poles. Temperature rises above 0 deg Celsius in summer only. Why then are just the poles frozen, and not lower latitudes during most of the Martian year? Is it because most of these areas perhaps aren't within the triple point of water, unlike the poles?

In order for ice or snow to form, the moisture that is later solidifying has to be available at the cold location. Moisture in this case is $CO_2$ with traces of water, leading to an ice cap made of $CO_2$-ice, with a ring of $H_2O$-ice 'trailing' around its outer radius.

The atmosphere is in fact only cold and dense enough for $CO_2$ to solidify at the poles, so no mystery there. Otherwise the entire atmosphere would condense out into a thin layer of $CO_2$-ice. To understand the formation of the $H_2O$ ice, we have to take into account how the water is transported inside the martian atmosphere.

Mars possesses only one global circulation cell (see early modelling on this by Haberle et al., (1993), and a recent review on the martian climate for the interested reader by Read et al., (2015)). 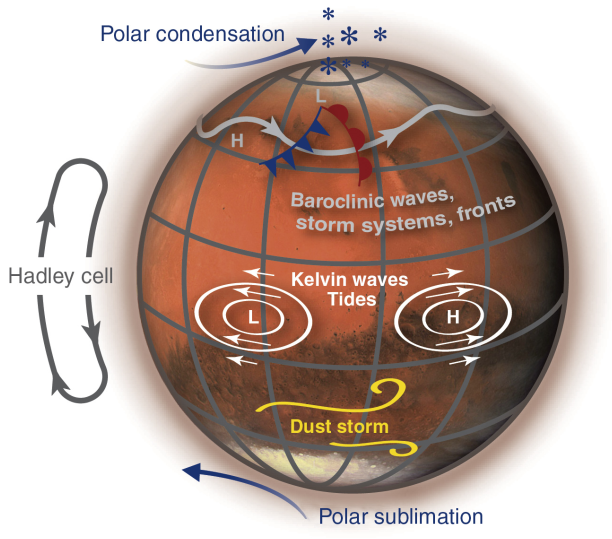 The reason for the single cell is a combination of Mars' small size and rotation period, as outlined in this answer. The effect of the single cell is that the condensable moisture is only transported essentially pole-to-pole directly, with only small variations of ~10-15 degrees latitude during the martian year.

Hence, no other location on Mars than the poles can accumulate a significant enough vapour pressure in order to form ice.

Not the answer you're looking for? Browse other questions tagged mars weather .

5
What if a global killer hit Mars?
5
Extraterrestrial snow?

10
Why is Mars considered the outer edge of the "goldilocks zone"?
2
If Mars were tidally locked to the Sun, what would the temperatures on its surface be like?
8
Why are Mars northern/southern hemisphere altitudes so different?
2
Help understanding the false MRO observations of hydrated minerals on Mars
2
What are the characteristics of solid carbon dioxide on the Martian poles?
4
Why is only a narrow chunk of sky darkened in this amazing Curiosity solar eclipse GIF from Mars?
2
Why are cirrus clouds more common on Mars?
46
Why is Mars cold?
1
How does the surface gravity on Mars vary between the equator and its poles?
1
Why are only some of the geologic features in Mars' Noctis Labyrinthus region named?