What were they expecting to see when Halley's comet appeared in 1910?

This answer to Any record of the Earth passing through the tail (not trail) of a comet? mentions

Earth passed through the tail of Halley's Comet in 1910. It caused a bit of a panic due to claims that cyanogen detected in the tail would cause harm: https://en.wikipedia.org/wiki/Halley%27s_Comet#1910

This comment reminds us that its appearance was not unanticipated:

Astronomers of that time certainly knew when to expect Halley's Comet. After all, this was its third appearance after Edmond Halley's famous prediction. It seems reasonable to think that Wells & much of the general public would have also known it was coming.

Question: What exactly were astronomers expecting prior to the comet's arrival? Did they have a predicted orbit, time of appearance and closest distance to Earth and estimated brightness prepared? If so, how close did the predicted behavior match the actual?

Was there any prediction or concern about the Earth passing through the comet's tail? 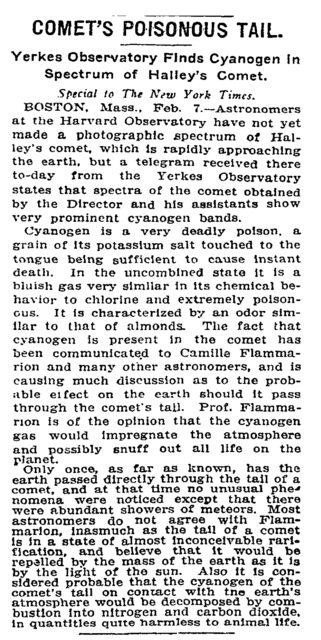 Browse other questions tagged history comets halleys-comet or ask your own question.

4
Any record of the Earth passing through the tail (not trail) of a comet?
3
What comet's tail did Earth pass through before Halley's?