Can a planet in our system eclipse the sun as seen from another one?

When the Sun, Earth and Moon get properly aligned, we get eclipses, where the Sun is partially or totally hidden by the Moon when seen from Earth.

Is it possible for one planet of the solar system to produce an eclipse on another one?

There are two underlying questions in this:

I understand that the Earth would not be able to project a shadow far enough to get such a phenomenon on other planets, but are there other combinations where it’s possible/did happen?

In our solar system, it is possible for one planet to partially eclipse the sun, but it is not possible for any planet to cause a full solar eclipse as seen from another planet.

The sun is too big and the planets are too small and too far apart. Transits occur, and can occur for any pair of planets, but they are very rare. As seen from earth, Mercury only transits a dozen or so times per century, and before 2004, the last time Venus had transited the sun was 1882. http://www.eclipsewise.com/transit/transit.html Orbital periods increase for the planets further away from the sun, so transits across the sun by the outer planets (while possible since no planets are in orbital resonance since Pluto got kicked out) are increasingly rare. Michael Seifert dug up these treasures, documenting transits of the outer planets: Jupiter, Saturn, Uranus. As expected, the transit of Uranus from Neptune is the rarest, occurring next in October, 38172 CE.

I ran these calculations using matlab and data from NASA. https://nssdc.gsfc.nasa.gov/planetary/factsheet/ For my input data, the rows are planets, and the columns are diameter (km), perihelion (e6km), and aphelion (e6km).

Here is my matlab code for posterity:

The short answer is no. The alignment occurs, but the eclipse does not, due to the distances and size differences involved.

There are a few things to consider here. You already mentioned a lot of them, I'll address those considerations separately.

are alignements of the Sun and two planets actually possible (and if so, how frequent)?

We can intuitively gauge this, as we've seen this happen during the transit of Venus: 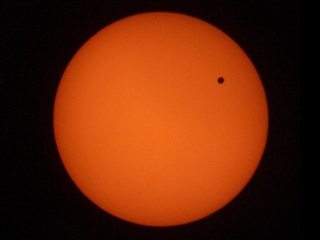 This situation describes your scenario. The sun, Venus and the Earth are aligned (within some reasonable range).

But, in fairness, you're asking about any of the planets, not just Earth and Venus. So is this possible for any other (or possible even all) combinations of two planets?

This is two questions in one: Do two planets' orbits overlap, and do these planets ever find themselves at this overlap point at the same time?

Quite interestingly, not only can they overlap, they must do so. The only way for two orbits to never overlap would be if they were parallel to each other (e.g. one orbit around the equator and one orbit around the tropic of cancer), but that second orbit is impossible.

All orbital planes must intersect with the parent body's center of mass. It's not possible to have an orbit that does not. To put it into visual terms: 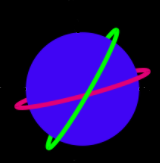 There is no way to position these two orbits in a way that they (a) are physically valid and (b) not have any overlap.

Do these planets ever find themselves at this overlap point at the same time?

The only way for them to not find themselves at this overlap point would be if their orbits were periodic. I would argue that perfect periodicity is unlikely to occur in nature, but that's an intuitive argument.

Looking at the planets' orbital periods, none stand out as being particularly periodic. I'm unsure if we can ever prove that our measurements or orbital period at any given time have perfect precision to conclude that perfect periodicity exists.

Other answers have already indicated the frequency with which such overlaps could occur. I'm mostly interested in whether they can occur or not, to see if we can conclude that your idea is possible or not.

So far, we haven't actually disproven the theory. Orbital planes will overlap, and our planetal orbits are not periodic so they will eventually overlap. But now we get to the other part: the shadow. Will the shadow of the nearest planest reach the furthest planet?

Let's look at the expected size of the shadow. Do you think it will be larger or smaller than the planet who casts it?

Note: I call it a "focal point" because of what it looks like on a diagram, and for lack of a better name. If anyone has a more official term, I'd be happy to hear it. 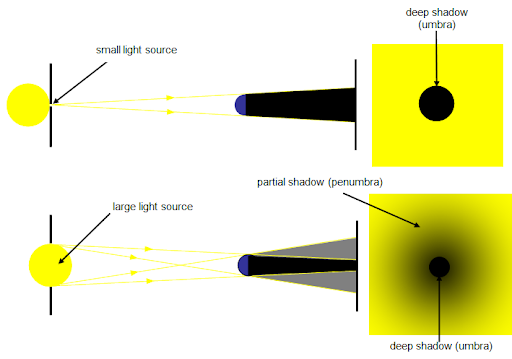 I don't think we need to explain how much bigger the Sun is compared to any of the planets.

The relative size of the Sun vs any planet renders the penumbra negligible. It could possible be perceived by lightsensitive equipment (edit: I don't know if it can be perceived, I just can't prove that it can't be perceived), but not by a human who observes this while standing on the further planet. It won't look like an eclipse. I refer back to the transit of Venus:

Given the significant size difference between the Sun and planet, and the massive distances between the planets themselves, it doesn't seem feasible for the umbra to even reach the next planet's orbit before it hits its focal point, which is why we don't describe such a transit as an eclipse.

Like an eclipse, a transit occurs when one object appears to pass in front of another object. But in a transit, the apparent size of the first object is not large enough to cast the second into complete shadow. Instead a much smaller dark shadow makes its way across the face of the further planet or star. Perhaps the most famous recent transit was that of Venus across the face of the sun in 2012.

There's a more intuitive way to express this. If a certain object (nearest planet) can block a light source (Sun), that means that from the point of view of the observer (on the furthest planet), the object must appear to be bigger than the light source. There's a quite well-known scene from Apollo 13 that showcases this: 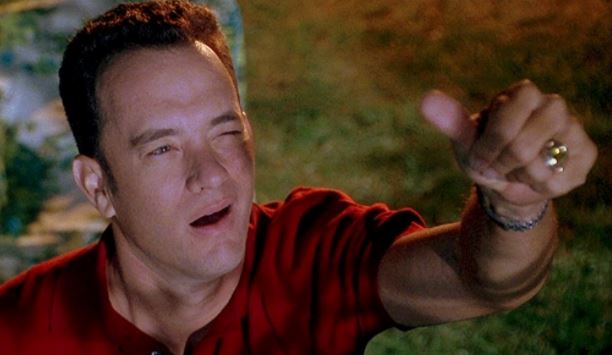 Tom Hanks (as Jim Lovell) is blocking out the moon using his thumb. Even though the moon is much bigger than Tom Hanks' thumb (citation needed), the relative closeness of his thumb to his eye (compared to that of the moon) makes the thumb appear bigger than the moon.

Let's say that Tom Hanks puts down his hand, and Chris Hadfield sticks his thumb out of the window of the ISS. His thumb is perfectly aligned between the moon and Tom Hanks' eye. We assume his thumb is the same size as Tom Hanks' (citation needed).
This wouldn't block out the moon anymore from Tom. But why is that?

Very simply put, even though the thumb is the same size, the relative distances between the eye, thumb and moon have changed. And now, Chris Hadfield's thumb does not appear to be bigger than the moon, when observed by Tom Hanks. And therefore, it can no longer block the moon from Tom Hanks' view.

So, we can reformulate your eclipse question: Is there any planet which appears to be bigger than the Sun, when observed from another planet?

The answer is no.

Edit: I've decided to make the below text easier to parse, by talking about the Earth and Venus. These are just examples, the same applies to any combination of planets, where Earth = furthest and Venus = nearest.

If you assume that the Sun is X times larger (in diameter!) than Venus, and the sun is Y times further from Earth than Venus is from Earth, then Venus will appear to be bigger than the sun (when standing on Earth) when X < Y.

If you look up the numbers for planet diameters and orbital radii, you'll notice that this doesn't happen in our solar system. Not even close. This is because the sun is simply too big relative to any ratio of two planetary orbits.

Not the answer you're looking for? Browse other questions tagged solar-system solar-eclipse planetary-transits eclipse-non-earth-related .

3
Occultation of planets by other planets

4
What would happen if a rogue planet hit one of the planets in our Solar System?
7
Can the period of the planet transit across the sun be calculated in the same way the eclipse year is?
24
Can the Moon eclipse Venus?
5
Is it possible for a septuple eclipse to happen on Saturn considering there are 7 moons capable of eclipsing the Sun?
1
Can a single location on earth witness solar eclipse totality 2 times during a single eclipse event?
9
What is the probability of life having developed or going to develop in our solar system another time?
2
How long does the "eclipse" last on a space station at the L1 point between a moon and a planet last when the moon blocks the sun in front?
31
Which planet, viewed from which other planet would appear the largest?