Why black holes look black to us?

Why black holes look black to us? 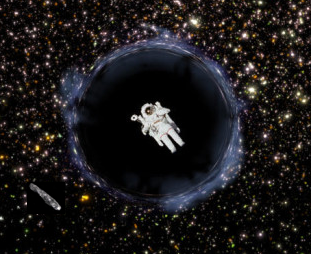 Now, we also know that the black holes are constantly pulling all the interstellar objects & meteors around it, thus if these objects are grabbed by the black hole, we are supposed to see many of these objects remain unchanged on its event horizon surface hence the color of the black hole is not supposed to be black instead the distorted color by the objects (i.e. below image). But still we see its color a pure black in most of the representations and photos. 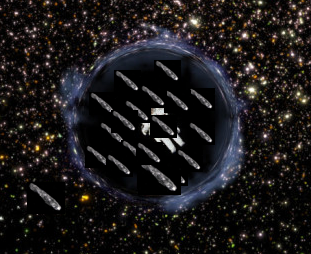 So why do we see black holes black instead of distorted colors of the space objects?

So if you had a telescope that could see extremely long wavelengths, the object might remain "visible" for just a tiny bit longer.

So you can't see the objects that have fallen to the black hole.

From the point of view of the astronaut, he falls down and in a short amount there is a singularity in the equations. It seems that his body is compacted into a single point of infinite density, it seems that general relativity can't yet describe this state, which will require a quantum theory of gravity.

Not the answer you're looking for? Browse other questions tagged observational-astronomy black-hole photography meteor interstellar or ask your own question.

5
Could someone see anything while being inside black hole?
3
Does conservation of energy make black holes impossible?
5
Can we discern black holes with visible light?
5
Reshaping black holes to "push" the event horizon
2
Behaviour of black holes
0
Do black holes really exist?
2
What can be learned from, or noted in this LIGO Orrery video?
4
Shouldn't we not be able to see some black holes?
5
Why isn't the black hole white?