The initial impacts are brighter. The team that observed the shoemaker levy impacts described them as "fireballs" and the initial pictures showed spots glowing bright after impact, though I'm not sure how much those images used the infra-red range, so, grain of salt, because I think you're asking about the visible spectrum.

Jupiter's bands are essentially Hadley cells where the darker bands are the warmer rising atmosphere and the lighter band is the cooling, more icy falling atmosphere. The whiter bands across Jupiter's latitude lines, what you see is sunlight reflected off ammonia ice. (the blue color of Uranus and Neptune is methane ice). When gas giant planets get hotter, they tend to lose their pretty colors and become darker reddish or brown colors. They hydrogen and helium that dominate the atmosphere are mostly transparent. The color we see comes from ice-clouds and other molecules in the atmosphere.

Impacts on Jupiter, with the planet's high escape velocity, creates an enormous amount of heat for any impact big enough for us to see from Earth and perhaps obviously, heat removes ice.

A variety of molecules play a role in Jupiter's reddish/brown colors, I'm not sure which is dominant, but phosphine gas/phosphorus compounds, Sulphur and hydrocarbons all reflect or scatter darker colors. But the primary answer to your question is that the brown spots you see after impact are due to a lack of atmospheric ice in combination with sufficient mixing so that there's an abundance of colored molecules. It's not too different from Jupiter's large storms that create it's dark or red spots.

A more recent image of an impact taken by an amateur astronomer. The initial impact isn't dark. It's lighter due to the heat of impact reaching above visible temperatures with presumably some atmospheric covering. 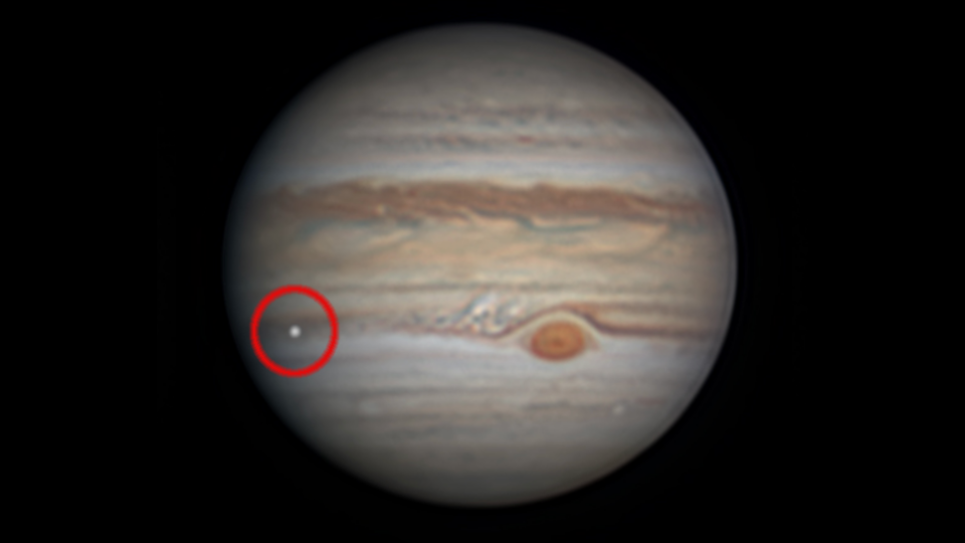 If you use an infrared camera, you probably see the spots remain brighter for some time, even as they become darker in the visible spectrum.

What you are seeing is the top of a huge cloud of dust and smoke that forms in the Jovian atmosphere. It doesn't look "red" because it cools down quite rapidly.

In fact the same is true when an asteroid impacts Earth. There is a cloud of dust and smoke (that looks white because it is lit by the sun and is seen against the sky) If there is a crater formed there would be an explosion, but usually there isn't much melting and the fireball of the explosion cools down rapidly. The effect is similar to very powerful bomb. You get a flash, a great deal of heat, that can start fires and a blast the might create a crater. But you don't get much melting of rock. (For colossal impacts there might be significant melt, There might be secondary volcanism triggered by the impact but these are not the red molten rock you describe)

Not the answer you're looking for? Browse other questions tagged asteroids jupiter impact or ask your own question.

3
Classification of a Comet
12
What will happen when landing on Jupiter?
10
Fate of Jupiter when our sun dies
8
What percentage of a lunar meteor strike is blown back into space?
0
Birth of the Gas Giant Planets?
2
Has a near earth object in heliocentric orbit ever been bright enough to be visible to the unaided eye?
3
Can a single impact event trigger a runaway greenhouse?
5
Why does the background noise in this image of 2020 QG look like corduroy?
3
What would a 220km diameter asteroid impact do to Earth?