My homeschoolers are studying the sun & time. We have set up a fence post to create a shadow and we are using it with experiments I found on the web to track the sun.

What we cannot find is information on how to reference points on a sundial other than solar noon. What are the other points of time on the sundial called? We purchased the sundial below. Roman numerals aside, the sundial has clear markings on it for various times. However, it does not appear to match a clock face as it has 17 reference points, not the expected 12.

Not being able to read the sundial face is proving frustrating. For instance, my little experimenters want see the difference a tracked shadow makes taken at the same watch-time vs. the same solar time.

So I am looking for how to properly read and reference the points of time on a sundial face. For example, let us say the shadow is pointing to the position I have drawn. What "sundial" time is that. 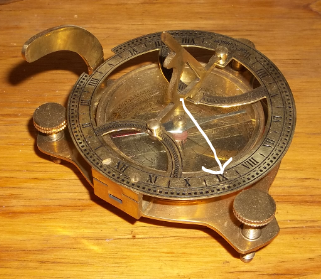 In principle this sundial is designed be used this way: 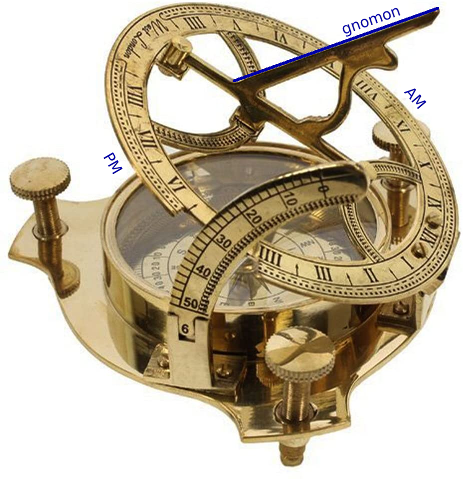 In practice the maker of this sundial seems to have prioritized aesthetics over accuracy. Hour marks should radiate from the base of the gnomon, but these radiate from the center of the dial. If your students are sufficiently motivated, they could make a more accurate sundial themselves as a follow-up project. An equatorial dial would not require any trigonometry, only a protractor.

The "stick" that casts a shadow is called a "gnomon"

The gnomon should point at the celestial North pole (and so is angled at about 45 degrees for most people in temperate climates, or more precisely it is angled by your local Latitude. So if you are Scotland at 55 degrees North, you should angle the gnomon at 55 degrees to the horizontal.)

If your dial is perpendicular to the gnomon then you mark the hours at equal angles, since the sun moves at about 15 degrees per hour around the Pole star, you mark one hour every 15 degrees. This forms an equatorial sundial. That is simple but now, since your dial is parallel to the equator, you won't get any shadow when the sun is south of the equator.

So usually the dial is laid horizontally with the angles projected from a perpendicular dial to a horizontal one. The angles between the hours are now variable,according to trigonometry $$\tan H_H = \sin L \tan(15^{\circ} \times t)$$ where $L$ is the sundial's geographical latitude (and the angle the gnomon makes with the dial plate), $H_H$ is the angle between a given hour-line and the noon hour-line (which always points towards true North) on the plane, and $t$ is the number of hours before or after noon.

The sun moves once around the pole star every day, so you would expect 24 divisions of time. However it is rather pointless to mark the position of the shadow after sunset, so most sundials don't mark all 24 hours. Since the dial is not in the same plane as the equator, the angles between the hours are not all equal, due to the projection.

5
Is sundial time entirely dependent on solar azimuth?
5
How many minutes does a sundial change every day?
3
How does the geometry for constructing a declining vertical sundial work?