What is the RGB curve for blackbodies?

I created a program to convert the temperature (in Kelvin) of a blackbody to RGB color. However, it is slightly inaccurate, and the deviations increase for values greater than 10000K and less than 1500K. Is there an accurate mathematical function that generates RGB values for given temperature, ranging from ~500K to 20000+ K?

Ok, here's my take on calculating the color of a blackbody, or any spectrum in fact:

Disclaimer: I'm not a color theorist, and there may be more accurate methods. But the result, shown in the bottom, looks about right.

First note that since color is a function of the relative intensity in various wavelength bands, it doesn't matter whether we express our spectrum in flux, flux density, intensity, luminance, or something else that only differs by constant values.

Let's consider a spectrum $S(\lambda)$ as a function of wavelength $\lambda$. If you're interested in a Planck spectrum, first calculate this from the temperature $T$:

The CIE 1931 color space was the first attempt to quantify the relation between the distribution of wavelengths and the color perceived by humans. It makes use of the so-called color matching functions $\bar{x}$, $\bar{y}$, and $\bar{z}$, which are functions of $\lambda$, seen here: 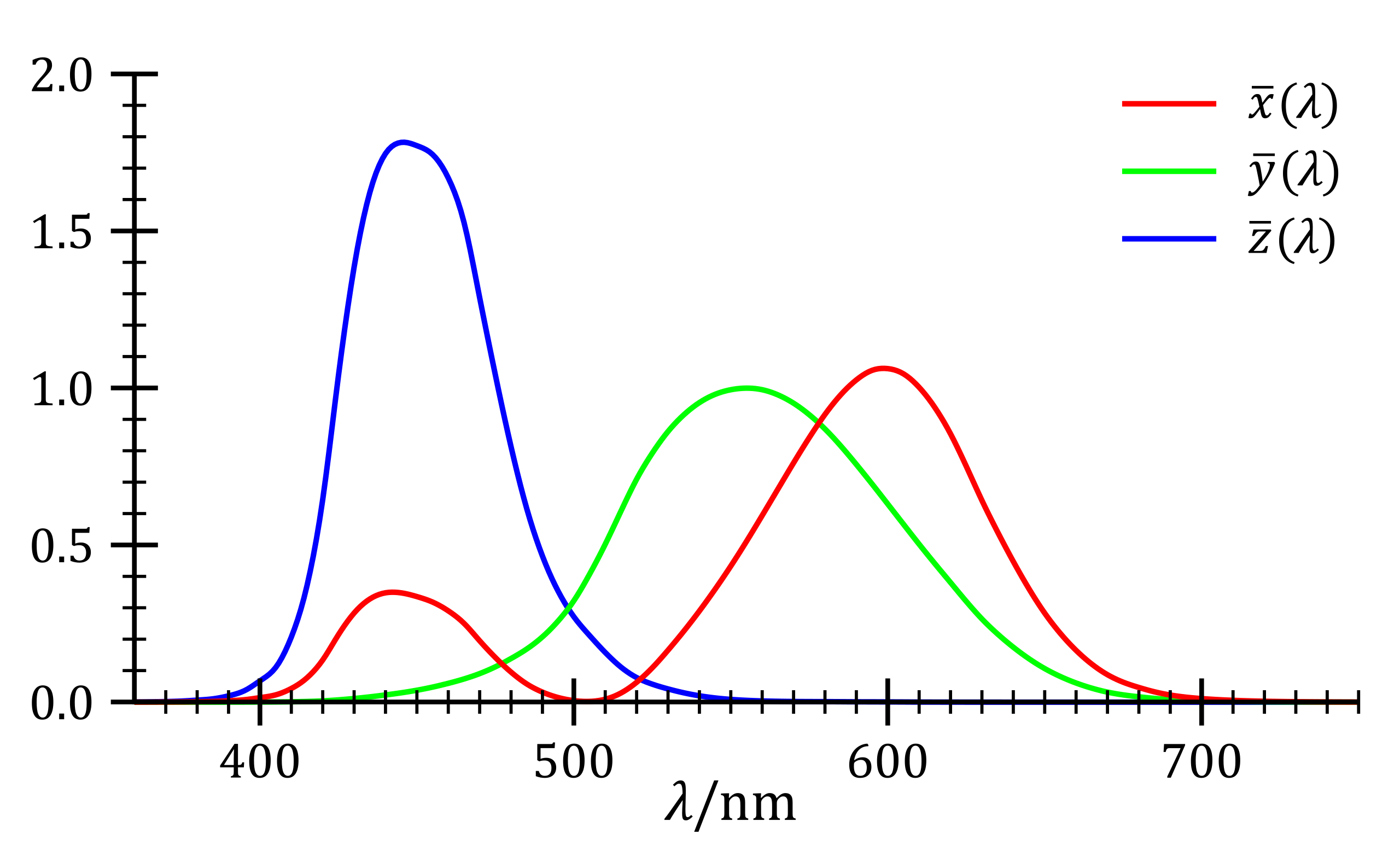 You can find tabulated values of these functions on the internet.

The color (which is 3D because humans have three different cones) of any spectrum can be mapped to a 2D position $\{x,y\}$ in the CIE 1931 color space chromaticity diagram seen here: 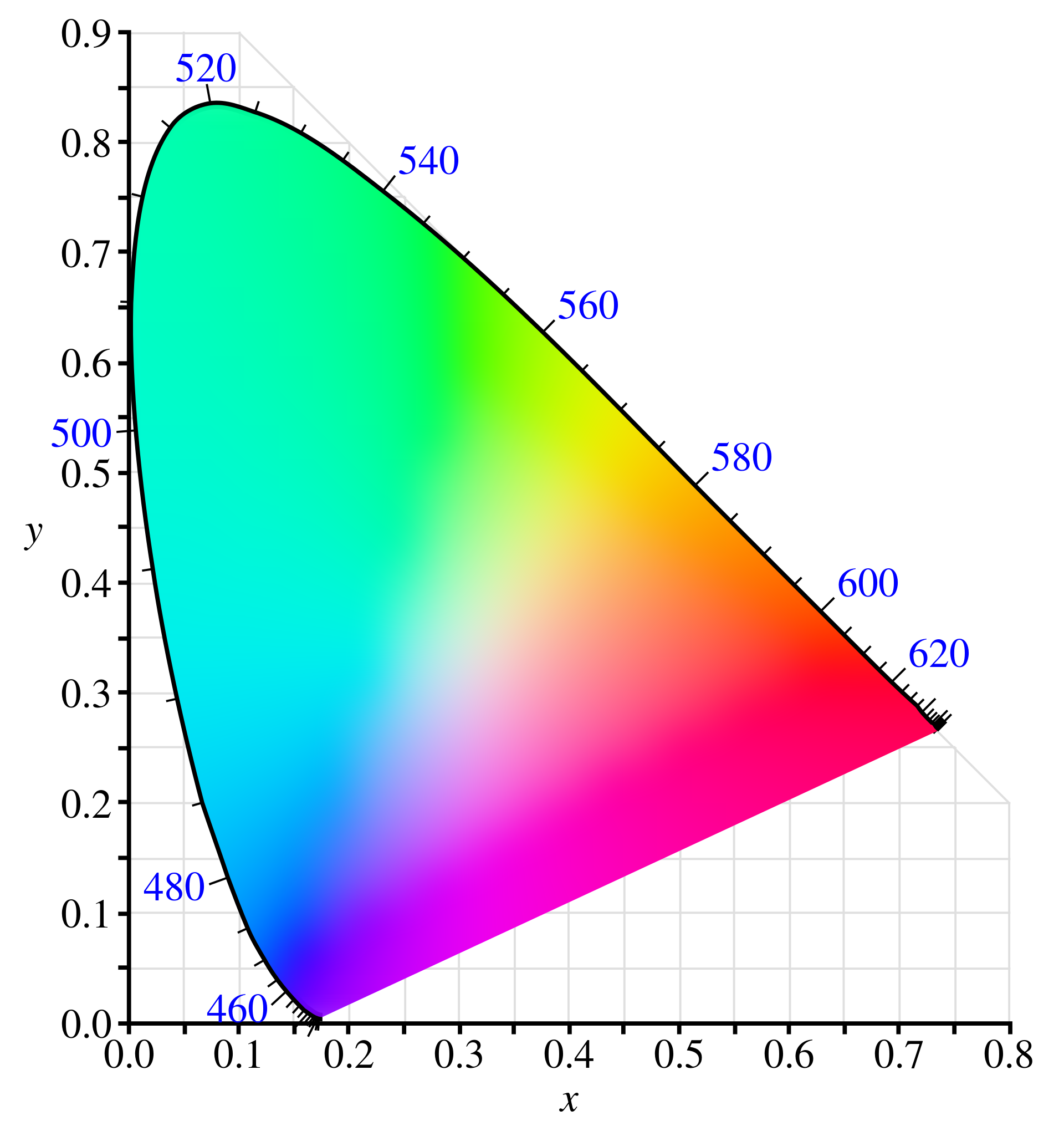 (Actually they're defined using the spectral radiance), but this is equal to the intensity to within a constant factor.)

To go from $\{x,y\}$ or $\{X,Y,Z\}$ to RGB is a linear transformation which can be conducted by matrix multiplication. There are many variations here; my understanding is that is has to do with whatever device you're using to display you colors, but there might be more to it.

I'm not 100% sure, but I think this set of RGB values needs to be gamma-corrected, which is a non-linear correction that account for the fact the the device displaying the colors shows different relative luminances than the human eye perceives. At least my result, shown in the bottom, looks about right, whereas it doesn't if I don't perform this correction.

Result: the color of the Universe through time

I implemented the above algorithm in Python, as a part of a larger code called timeline that calculates various properties of the Universe as a function of time after the Big Bang. You can find it here on GitHub.

When stars arrive, the average cosmic spectrum becomes more complicated and can't be calculated (yet) from first principles, but must be observed. I haven't found such observations at early times, but Baldry et al (2002) presents the spectrum at various times after an age of 11 billion years, at which time the Universe is a dull "cosmic latte". So in this figure, I grayed out the color between $t=200\,\mathrm{Myr}$ and $t=11\,\mathrm{Gyr}$: 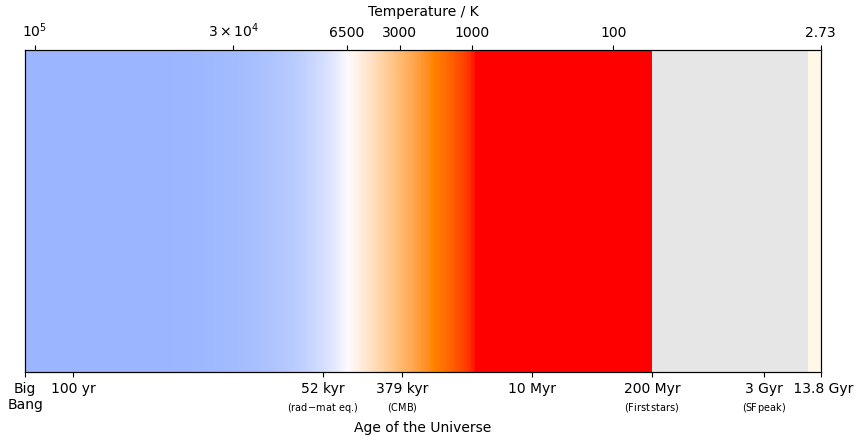 But please note the disclaimer in the top of this answer :)

Not the answer you're looking for? Browse other questions tagged temperature mathematics black-body or ask your own question.

2
what degree in the sky does the sun change color?
1
Blackbody curve in RGB for objects less than 1500 K?

3
What is the highest recorded temperature in space
6
What does a black dwarf look like?
5
How to calculate the time for the solar disk to pass the horizon and transit's lines
1
Trouble with plotting a graph for the Planck function
1
Blackbody curve in RGB for objects less than 1500 K?
1
What units are used for the Stefan-Boltzmann law?
3
What is the rate of change by day for a given right ascension?
6
At high temperatures, do planets glow like blackbodies?