Why do sunspots appear dark?

Sunspots, such as this one, appear dark: 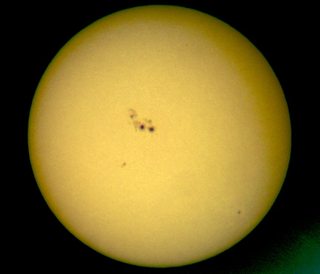 From this NASA resource:

Sunspots are actually regions of the solar surface where the magnetic field of the Sun becomes concentrated over 1000-fold. Scientists do not yet know how this happens. Magnetic fields produce pressure, and this pressure can cause gas inside the sunspot to be in balance with the gas outside the sunspot...but at a lower temperature. Sunspots are actually several thousand degrees cooler than the 5,770 K (5496.8 °C) surface of the Sun, and contain gases at temperature of 3000 to 4000 K (2726.9 - 3726.8 °C). They are dark only by contrast with the much hotter solar surface. If you were to put a sunspot in the night sky, it would glow brighter than the Full Moon with a crimson-orange color!

Sunspots are areas of intense magentic activity, as is apparent in this image:

You can see the material kind of getting stretched into strands.

As for the reason it is cooler than the rest of the surface:

Although the details of sunspot generation are still a matter of research, it appears that sunspots are the visible counterparts of magnetic flux tubes in the Sun's convective zone that get "wound up" by differential rotation. If the stress on the tubes reaches a certain limit, they curl up like a rubber band and puncture the Sun's surface. Convection is inhibited at the puncture points; the energy flux from the Sun's interior decreases; and with it surface temperature.

All in all, the sunspots appear dark because the are darker than the surrounding surface. They're darker because they are cooler, and they're cooler because of the intense magnetic fields in them.

Sunspots are cooler because their magnetic fields inhibit the replenishing of heat from convective flows (due to the interaction between plasma and magnetic fields). This allows them to cool radiatively. The rest of the solar surface is constantly being replenished by convective cells that reheat it.

The image you showed is taken in the "photospheric continuum", which is a black-body dominated part of the radiation spectrum. So, because sunspots are cool (compared to their surroundings), this means that their Planck function is lower than their surroundings, and hence their brightness is lower, causing them to appear dark in the image.

Not the answer you're looking for? Browse other questions tagged the-sun sunspots or ask your own question.

15
What are some theories that explain the 11 year solar cycle?
1
Would dark energy save the earth for a while as the sun heats up?
14
Why do comets appear to have a continuous supply of dust?
6
Are sunspots vertically displaced from the surrounding photospheric plasma?
3
What is the main source of opacity in sunspots?
4
Would one have to be more than halfway to the Oort Cloud for the Sun to appear as bright as the full moon?
4
Is the longitude assigned to sunspots spherical or projected?
6
Can we see evidence of sunspots on other stars
3
Is there a database of past sunspots?
3
Why does the Sun move slower during the solstices?