How to derive Kepler's 1st Law?

I was going through the derivation of Kepler's 1st Law in the textbook "An Introduction to Modern Astrophysics" by Carroll and Ostlie. From there, I got stuck in a few places in their derivation as I found it confusing. In total, I have 2 questions. 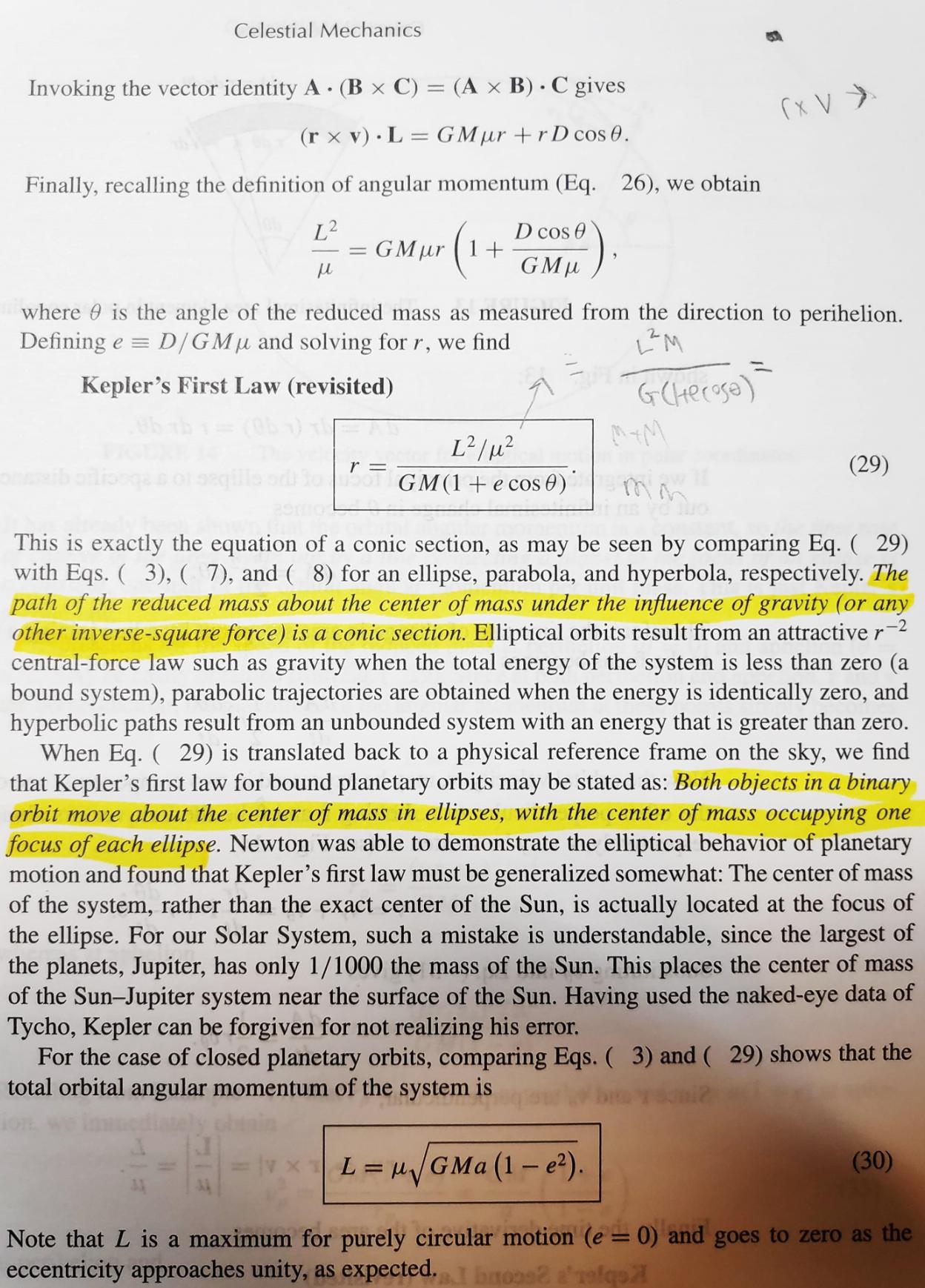 Q1: In the second sentence that I highlighted, it is mentioned that when equation 29 is translated into a physical standpoint, it implies that "both objects in a binary orbit move about the centre of mass in ellipses, with the centre of mass occupying one focus of each ellipse" however I don't see how the physical implications of equation 29 will translate into this that they claim. This equation clearly only describes the position vector of the reduced mass, so how can it be extrapolated to talk about the motion of a binary system when there are 2 masses rather than 1 reduced mass. (Clarification: I am aware that reduced mass is a way to model binary systems, but in this case I don't see the link between the motion of the reduced mass and the motion of 2 bodies)

Q2: On the very last line, it is mentioned that "L is at minimum as eccentricity approaches unity, as expected". However I don't see the qualitative reasoning as to why this would be "expected". Is there a physical or physics explanation as to why we expect an orbit with a large eccentricity to have a lower angular momentum than one with a low eccentricity?

I must say that I agree with you, this way of derivate the Kepler law is not the most intuitive, it's maybe for this reason they specify: "revisited".

R1: The reason is stated at the very begin of the chapter, where you derive the relation between $r$ and the angle to the perihelion $\theta$ for the general case of an ellipse (Eq 3 in your book in Cap 2.1 Elliptical orbit, but I can see I have an older version than yours), where:

and you can work out in equation (29), obtaining the equation in the same form as for an elliptical orbit.

For example, in the case of the an ellipse you have $0 < e < 1$, and it indicates how much the ellipse is "squashed". Another example, if you have $e=0$ than you have a circle.

In the case of $e=1$ you have a parabola, from the equation of $e$ above it means that $a\gg b$. In a more physics sense, it means that the system is not in a gravitationally bounded state, and the less massive object $m_1 \ll m_2$ is on a parabolic trajectory, deviated by the gravitational pull of $m_2$, and will not stay in orbit.

With copious research and thinking, I managed to answer my own question, but I am going to share the answer seeing that no one has answered it satsifactorily.

Q1: the position vector $\vec{r}$ of the reduced mass is also the relative distance between the 2 masses, therefore if the reduced mass is undergoing elliptical motion about its centre of mass, it is equivalent to taking the reference frame one of the objects in the binary system and measuring the position vector of the other object since $\vec{r}$ is relative distance. Therefore what Kepler's 1st Law is really saying, is that in a binary system, the objects will undergo elliptical motion with respect to the other object.

Q2: As the eccentricity tends towards 1, notice that from the formula $e=\sqrt{1-\frac{b^2}{a^2}}$ that if e were to tend towards 1, $\frac{b^2}{a^2}$ must tend towards 0, and this would cause the ellipse to approach the shape of a line (but it is important to note that $e=1$ would result in a parabola, not a straight line). In a line, since the velocity and position vectors are parallel, L would thus be 0 (since $L=m\vec{r}\times \vec{v}$ and if they are parallel the cross product would be 0)

26
How did Kepler "guess" his third law from data?
8
What is the shape (along the plane, not up-down) of stellar orbits in flat spiral galaxies
0
Kepler's second law of motion
20
What are Kepler's laws (as he wrote them)?
14
How does the gravitation of Jupiter or other big planets affect Kepler's third law?
1
Can Kepler's 3rd Law be applied in higher dimensions to describe orbits (quadric surfaces)?
5
Kepler's Law, focal points - Heliocentric or Barycentric?
5
How to calculate eclipses on a planet in a binary star system