Why does a right-handed circular polarized wave get lagged when going through ionized plasma?

Moreover, the video shows that the wave that gets lagged most is the right-hand circularly polarized.

Why is not the left-hand circularly polarized? What is the mathematical difference between their refraction indices?

What is the mathematical difference between their refraction indices?

The conventions on the signs of the direction of magnetic field vectors and of charges. 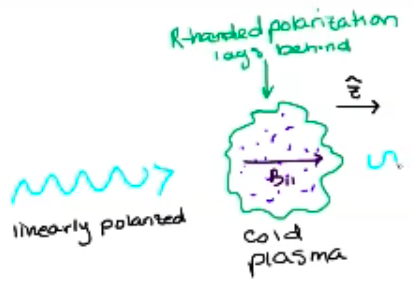 The tutorial specifies several things that can have a sign;

Let's look at WIkipedia's Faraday effect; Interstellar medium where an equation for $RM$ or rotation measure is given:

This expression includes $e^3$ and $B_{\parallel}$. Notice that the power of $e$ is odd. The assumption is that the interstellar medium is negative electrons, so they've replaced $q^3$ with $e^3$ but if it were positrons they'd have to write

Also remember that $B_{\parallel}$ can be positive or negative since the field could point either way relative to the direction of propagation.

The tutorial shows some of the intermediate steps where we get the idea that both the sign of the charge and the directions of the field will be important.

Why right handed circular polarization gets lagged when going through ionized plasma?

It could be either the RCP or LCP that is delayed more than the other, depending on the direction of the magnetic field relative to the direction of propagation, and on the sign of the lightest charged particles in the plasma that can respond most quickly to the electromagnetic wave.

In this example, the field just happened to be drawn parallel to the propagation, and normal plasma with negative electrons. In this case RCP is delated more than LHP. Had either one of those been opposite in the example, the result would have been oposite.

Not the answer you're looking for? Browse other questions tagged magnetic-field galaxy-cluster polarization or ask your own question.

1
Why did it take five years to “figure out” how to use astrometric calibration sources to deblur LOFAR images?