After what time interval do the closest approaches of Mercury to the Earth repeat?

The sidereal period of Mercury's revolution is 88 days and the synodic period — 116d.

my solution, but in the question featured "the greatest rapprochement." And this is no longer so easy. Because the orbit of Mercury is noticeably elongated and ... in turn, it experiences rotation around the Sun. The effect is called "precession of the perihelion of the orbit of Mercury". We must take it into account. The closest approach of Mercury to Earth will be when it is at this point, and it, in turn, is on the Sun-Earth line.

The time of Mercury's revolution around the Sun is 88 days,

Let's say we are on Mercury and today there is an Earth opposition, the next one will be when Mercury returns to its original place (having made a circle in its orbit) it is 88 days, but these 88 days the Earth does not stand still, it has shifted in its orbit by 88/365 by about a quarter => Mercury will have to "catch up" with the Earth for 22 days, but during these 22 days the Earth will still shift in orbit by 22/365 approximately one sixteenth => another +5 days. Total 88 days + 22 days + 5 days = 115 days

Answer: oppositions of the Earth for an observer with Mercury are repeated with a frequency of 115 days

@Glorfindel's explanation is very clear. I wondered about how big of an effect "everything else" would have, but I couldn't figure out how to add an image to a comment. Here is a graph from 2018 to 2023 of the distance between Mercury and Earth. You can see every 3rd minimum is a bit deeper than the others just like Glorfindel said. The details of each local minimum change in a somewhat irregular way (about 10% of the closest distance variation), but the broad pattern fits the simple explanation well. 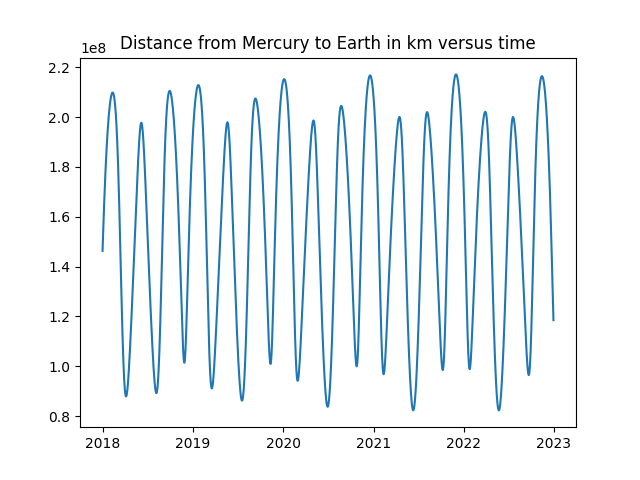 Here is python code to generate such a graph yourself for a different time period. It uses skyfield to access JPL's data on the planetary positions and matplotlib to graph it.

The text you quoted (is that from your textbook?) uses a simple approach; it counts every closest approach of Mercury to Earth, not just the ones which occur when Mercury is relatively far from the Sun (and hence closer to Earth). That means you don't need to account for

Especially the latter effect is so small that you don't need to account for it; only very careful measurements at the end of the 19th century revealed there was something wrong with Newtonian mechanics.

so almost 116 days. I don't really like the quoted 'Achilles and the tortoise paradox'-style approach.

If you do want to take Mercury's rather elliptical orbit into account, you can note that after 3 times 115.75 = 347.25 days, the Earth (and hence Mercury) are at almost the same places in their orbit, so a 'relatively close' closest approach is followed by another one 347 days later.

Not the answer you're looking for? Browse other questions tagged orbit earth mercury conjunction .

0
What is the shape of the Sun's orbit around the Earth taking into account elliptical orbits?
8
When is Earth closest to the Sun?
5
What is wrong with this measurement of the synodic period of Mercury?
2
How Long Will Earth's Year be When Our Sun Goes Red?
20
Does anything orbit the Sun faster than Mercury?
3
What would the Earth's peri- and aphelion have to be in order to have the same seasons due to its orbit?
3
What are the Time Zones on Mercury?
7
What are the "weather" (and other) implications of long "days" and short "years" on Mercury?