How would Earth's magnetic field change if the outer core was solid?

A widely accepted theory for how the Earth's magnetic field is generated is the dynamo theory. Dynamo theory describes how molten magma convection currents containing metal are locally spun the same direction by Coriolis forces, producing a magnetic field. 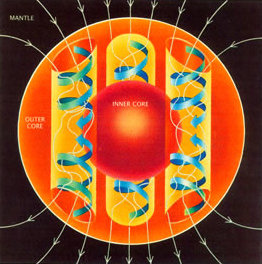 If Earth's outer core was solid, this effect would go way. However, the metals in the interior would still be moving (though all together) due to the Earth's rotation. Would Earth still produce a magnetic field? If so, how would it compare to our current field? Would it still help shield the atmosphere from charged particles?

Thus as a result, the Earth's magnetosphere would shrink considerably had it as little rotation and/or no liquid outer core. With only a solid core remaining, it would also only be able to produce some small remanent magnetization which is usually MUCH less than any self-feedback dynamo like Earth, Jupiter, Sun,... are able to produce. Erosion of the upper atmosphere would be much stronger and we could enjoy polar lights about continuously and even at low lattitudes as we'd loose considerable magnetic field strength, especially of the dipole moment.

Not the answer you're looking for? Browse other questions tagged planet magnetic-field earth-like-planet or ask your own question.