Source of red in earth's photographs

What is the red in this picture of earth? At first we thought it might be pollution, but Jupiter also has red. 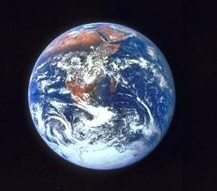 tl;dr: This is the famous "Blue Marble" image taken by one of the Apollo 17 astronauts. This particular rendering is labeled in Wikipedia as

From Wikipedia's The Blue Marble:

The Blue Marble is an image of Earth taken on December 7, 1972, from a distance of about 29,000 kilometers (18,000 miles) from the planet's surface. It was taken by the crew of the Apollo 17 spacecraft on its way to the Moon, and is one of the most reproduced images in history

The question asks for:

Source of red in earth's photographs

What is the red in this picture of earth?

This is not asking what land mass appears red, it asks for the source of the red color.

That's a good question and I think it has a disappointing answer in (at least) two parts:

Here it is again at https://www.innovatorsmag.com/enter-earth-school/ and the credit says "Photo by The New York Public Library on Unsplash" and while they are amazing I didn't know that The NYPL has a branch in Space!

and here it is cropped below, and then analyzed. It looks like the center of the image is roughly 29 degrees South latitude, and 37 degrees East longitude.

It's not from a geosynchronous weather satellite, it's from something that's far from Earth but in an unusual orbit.

Earth's axis is tilted 23 degrees to the ecliptic, and for example DSCOVR's halo orbit around Sun-Earth L1 is big and Wikipedia tells us that it

orbits the L1 point in a six-month period, with a spacecraft–Earth–Sun angle varying from 4 to 15°

so that means that at about 1.5 million km from Earth it could have easily taken this image. 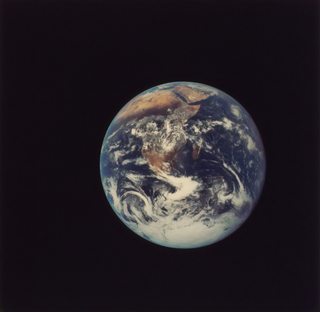 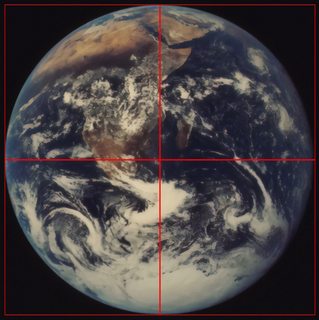 Click for larger sizes. left: credit: The New York Public Library and CC BY right: approximate subsurface point of spacecraft is at -27 degrees latitude, so not from a geosynchronous spacecraft.

But it wasn't taken by DSCOVR!

So after all this hullabaloo about narrow band filters from satellites this turns out to be a hand-held photograph from a large format 70-millimeter Hasselblad camera by an Apollo 17 astronaut using Kodachrome or whatever!

So the image is nearly 50 years old and has been reproduced a zillion times in a zillion ways, and the exact colors seen reproduced today on some random website are meaningless!

"The Blue Marble" is a famous photograph of the Earth taken on December 7, 1972 by the crew of the Apollo 17 spacecraft en route to the Moon at a distance of about 29,000 kilometers (18,000 statute miles). It shows Africa, Antarctica, and the Arabian Peninsula.

Image Caption: This classic photograph of the Earth was taken on December 7, 1972. The original caption is reprinted below:

View of the Earth as seen by the Apollo 17 crew traveling toward the moon. This translunar coast photograph extends from the Mediterranean Sea area to the Antarctica south polar ice cap. This is the first time the Apollo trajectory made it possible to photograph the south polar ice cap. Note the heavy cloud cover in the Southern Hemisphere. Almost the entire coastline of Africa is clearly visible. The Arabian Peninsula can be seen at the northeastern edge of Africa. The large island off the east coast of Africa is the Republic of Madagascar. The Asian mainland is on the horizon toward the northeast. 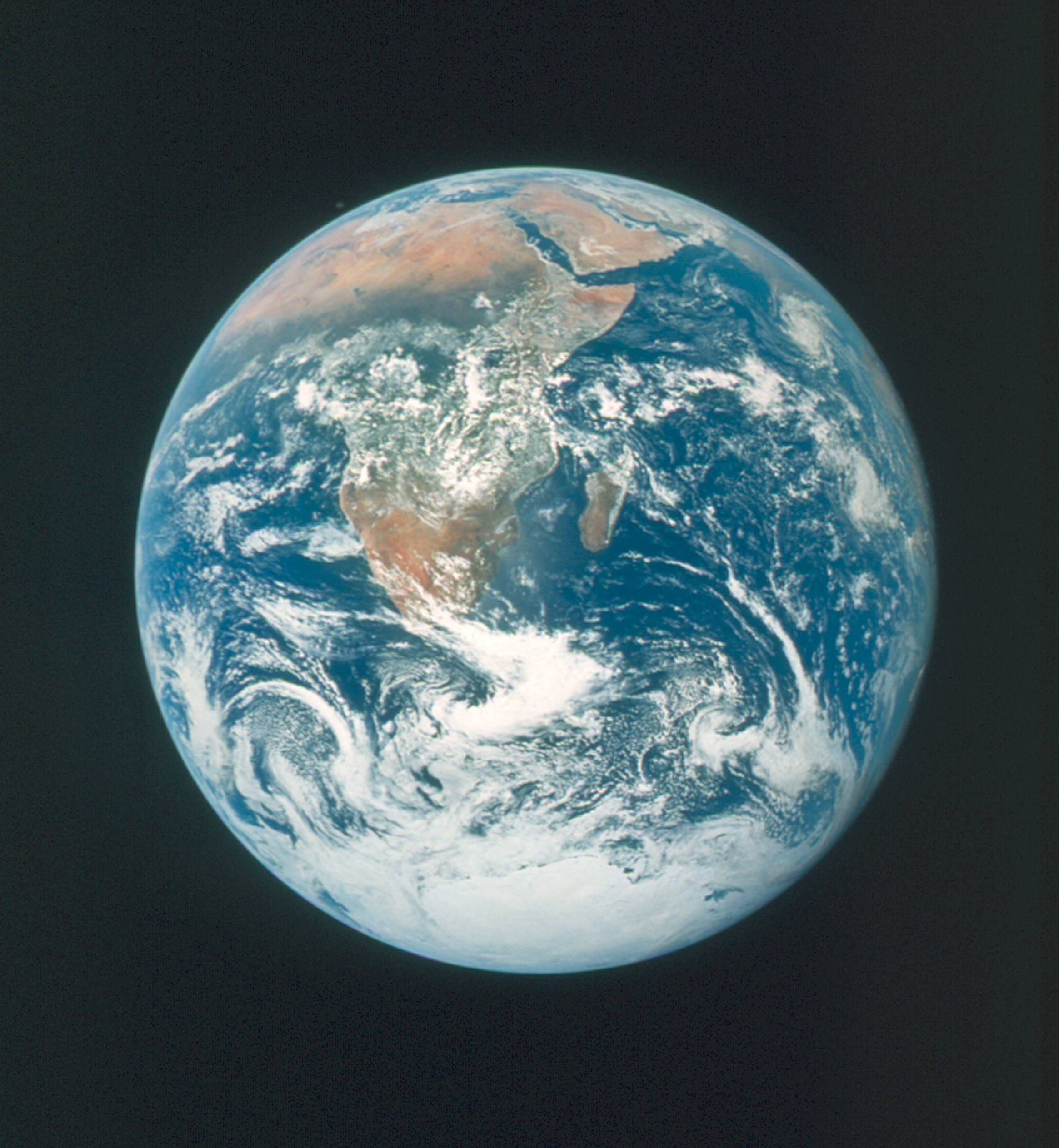 If you look closely at the central part of Africa, which is mostly covered with clouds, you may seem some greenish color between clouds. Equatorial Africa is mostly lush and and green. Most of Northern Africa is the Sahara Desert, and there are also large deserts in Southern Africa.

So if the clouds weren't in the photograph, one could see all of africa clearly, with desert in the north and south and greenish vegetation in the center.

So the "red" color, which is actually some combination of reddish, orangish, yellowish, brownish, tawney, and sandy shades, is the various colors and shades of desert regions seen from outer space.

Where is there red in your image? If you mean the yellow/orange-ish parts of land masses, these are deserts. Your Blue Marble image is a bit darker; the original image is black-and-white while the colored version is this one, it's a bit brighter than your image and the deserts are clearly yellow: 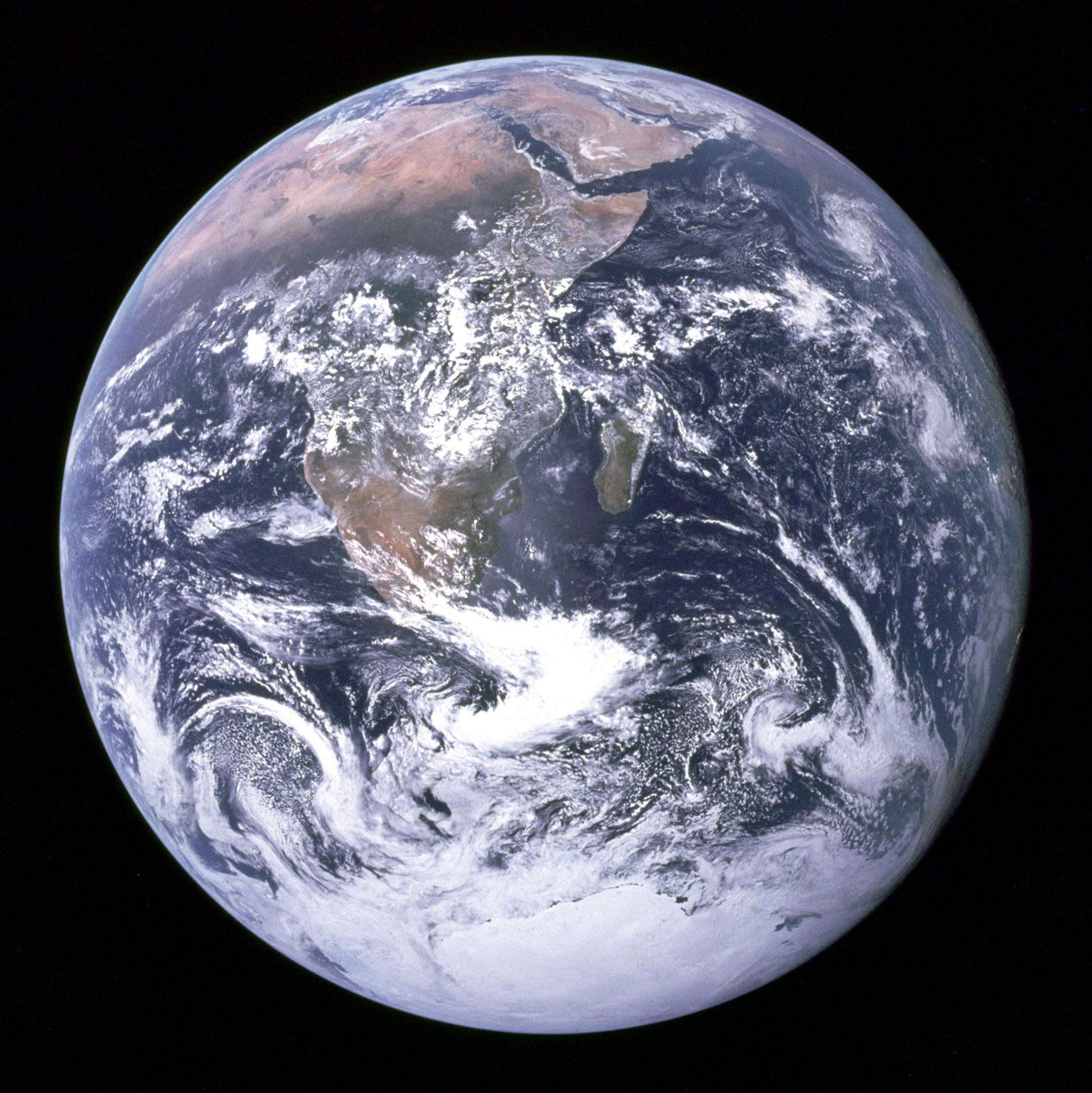 33
How could a hobbyist astronomer determine apparent magnitude of a star?
6
Energetics of Titans Tholin haze
4
Can you see city lights on the Moon from Earth?
2
Are the darker blue/black areas in this picture what the atmosphere of Jupiter looks like without clouds?
23
Terrestrial Exoplanet Skies – I've Built a Visual Sky Chart. Is it Accurate?
7
How will “modern equipment” allow the Royal Observatory to now avoid some of the effects of light pollution at Greenwich?
0
Why is the opening in the Anglo-Australian Telescope's dome so small?
3
Which kinds of astronomical observations most need to avoid the Moon being up?
3
How far can we detect lightning in radioastronomy?