What is the duration of the era during which it will be possible to perceive a total solar eclipse?

It's my understanding that the Moon is currently receding from the Earth at about the rate our fingernails grow (about 1.6 inches, or 4 centimeters, per year). Lunar retreat rates in the distant past may have been slower than this.

At some point, the Moon will no longer be able to fully block the Sun. (This question on StackExchange addresses the period from now onwards; one solution offered is that the Earth will have its last total solar eclipse in about 600 million years.)

However, what I'm interested in is determing the total duration of that period when it will ever be possible to perceive the Sun's corona (and other effects such as Baily's beads) from Earth by means of a total solar eclipse. This requires knowing both how long it is until the last eclipse will occur (~600 million years) and the time that has elapsed since the first such event happened. Note that the critical period I'm trying to discover is that window of time during which the apparent sizes of the Sun and the Moon, as seen from Earth, are approximately the same size, as they are now.

(In case anyone's interested, my reason for asking this is to try to determine the probability that we humans should have evolved at that point in time when it's possible to perceive a total solar eclipse, to further a pet theory of mine that suggests that it may not be a coincidence.)

There are a lot of competing models for how fast the Moon is retreating from the Earth, but they all agree the rate of distance increase is non-linear. That means any answer to this question is going to involve a lot of error. I think there are two different questions here and I will address them separately:

1. How long ago could the whole circumference of the Corona be seen from a hypothetical observer on Earth?

No matter how close the orbiting moon was to the Earth, Bailey's beads and some of the corona would be visible just as the Sun became fully obscured by the Moon.

If you are wondering when the entire circumference of the corona might be visible during a solar eclipse, NASA says the corona extends to about 12 solar radii. 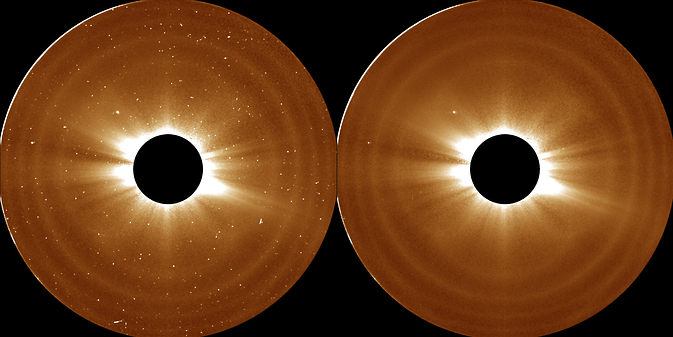 So the whole circumference of the corona presumably wouldn't be visible if the moon was 12 times closer to the earth. There a few different guesses for the Earth-Moon distance in the past, and Franco and Hinnev show Webb's TD (Tidal Dissipation) model here contrasted against constant extrapolated recession models: 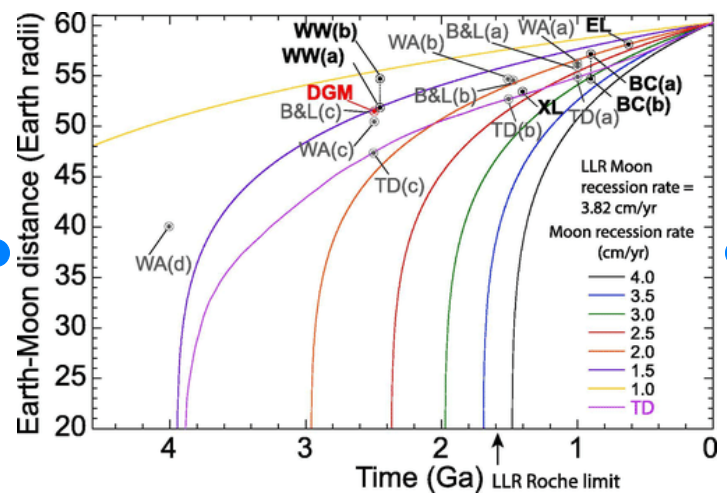 Here, some of the points on the plot denote geological tidal evidence for Earth/Moon proximity. If we believe their TD model, the answer is about 3.9 billion years.

1. How long ago could the angular diameter of the Sun and Moon be the same in the sky as viewed from Earth?

The current moon's apogee is 405,400 km, so it still would barely eclipse at 38,054 km closer. This is about 6 Earth radii, so if the above chart is to be believed using their 'TD' model, the earliest time the sun and the moon could have had the same angular size is 1.2 billion years ago. Of course, this guesstimate doesn't account for the fact that the sun's size isn't constant. It also doesn't account for the fact that the Moon and Sun aren't perfectly spherical.

6
When will the last total solar eclipse occur?