Has the Earth-facing side of the Moon that we see today always faced us ever since the Moon got tidally locked? Or does it precess?

Title. Does the Earth-facing side of the Moon slowly precess due to perturbations and torques exerted by other bodies? Or is the side of the Moon we see today the same as when it first got tidally locked?

P.S. I know we don't see the exact same side of the Moon everytime due to libration. That's not what I'm asking.

The Earth-facing side of the Moon doesn’t change currently due to any of the forces on it by other bodies (excepting librations).

From Gladman et. al.: “tidal dissipation in the satellite drives it to a state where […] the spin axis of a satellite in a generalized Cassini state will appear stationary.” The $S_2$ Cassini state is one of the two possible eventual stable states for a general moon system. But, according to Gladman, our Moon has "$S_2$ as the only possible Cassini state".

Before achieving a Cassini state, the tidal forces exert an average torque of $-SC\cos\theta\sin\theta$, where $\theta$ is the obliquity of the moon's orbit measured with respect to the orbit normal, $C$ is the satellite’s moment of inertia about the spin axis, and $$S=\frac{3Gm_p}{2r^3}\frac{C-(A+B)/2}{C}$$ where $m_p$ is the mass of the planet, $G$ is the gravitational constant, $r$ is the orbital radius of the satellite, and $A$ and $B$ are the other two principal moments of inertia.

Note that $S$ has $r^3$ in the denominator (also as pointed out by Stuart Robins in a comment above), which means the torque exerted by tidal forces was much higher when the moon was closer to the Earth. In other words, since the Moon’s face towards the earth is not precessing now, it certainly wouldn’t have in the past when the potential tidal torque was higher.

I think Gladman et. al. give pretty credible evidence for their claim of tidal lock, in that they account for wobbles, highly eccentric orbits, and oblate spheroids in both the planet and the moon. They don’t specifically account for the gravitation of other bodies like the Sun. The above equation also gives us a comparison of relative tidal effects on the Moon by noting $m/r^3$ is 9.2e7 for the Earth/Moon system, but only 5.9e5 for the Sun/Moon system. Gravitational perturbations from the Sun and other solar system objects affect the Moon's orbital elements, but don't have a significant effect on it's rotation rate.

There is plenty of lunar geological evidence supporting Gladman et. al.’s claim that the Cassini state is stable, in that we see a fundamental asymmetry between the near and far faces of the Moon. The near face has a thinner crust and more volcanic maria. The far side has a thicker crust and more visible asteroid craters: 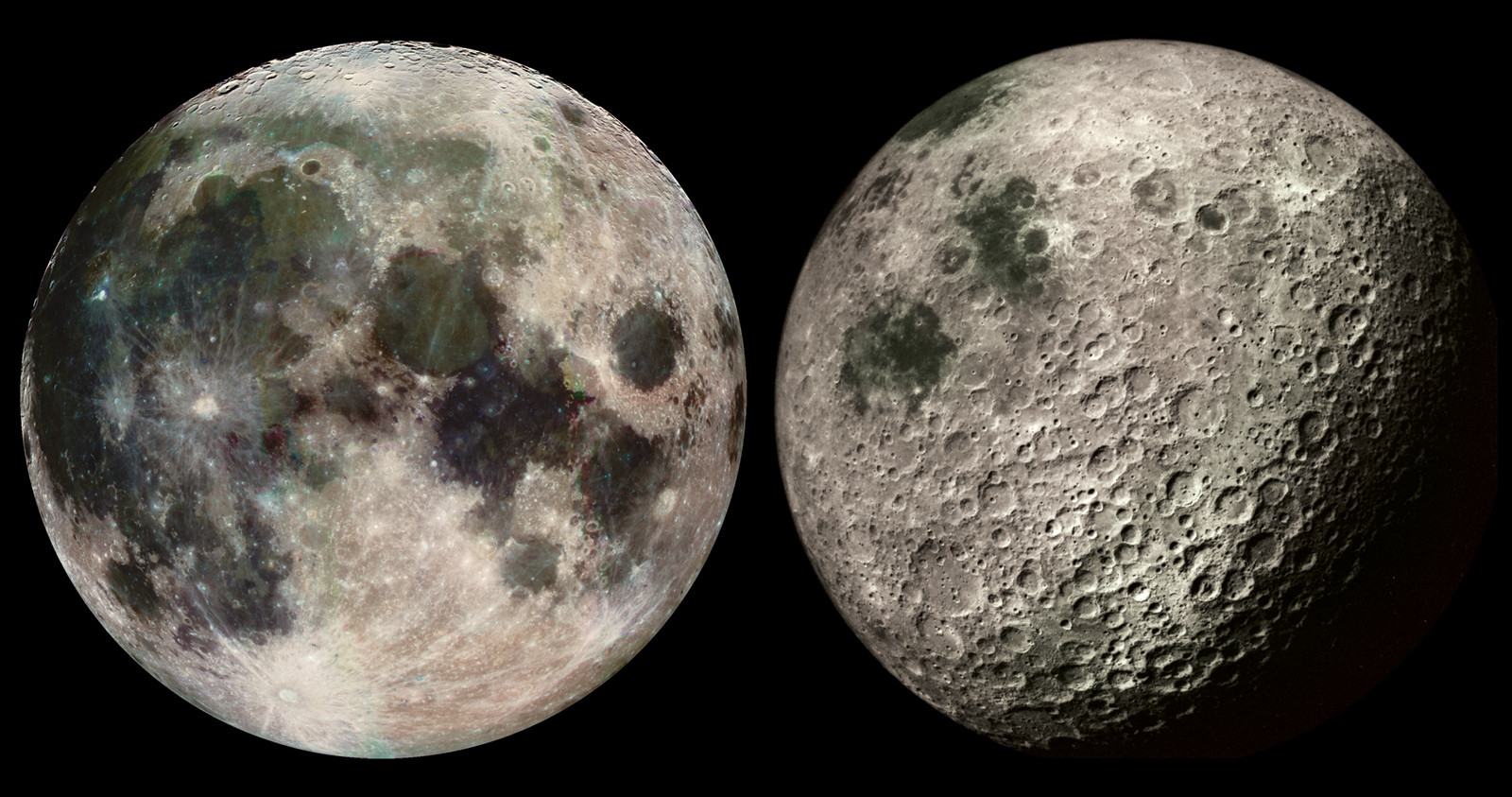 Roy et. al. claim the asymmetry between the near and far faces is due to heat from the Earth causing the early tidal locked Moon to cool more slowly on the lunar face pointing to the molten cooling Earth. If their theory is correct, then the Moon's face towards Earth hasn't significantly changed since the Earth/Moon system infancy.

The near face of the Moon doesn’t appear to be precessing currently, but could it have changed orientation from its original tidal lock configuration? There is a strong suggestion from Kadono, that an asteroid impact could have an effect on spin rate. Unfortunately, the paper is behind a paywall, so lets do a "back of the napkin" calculation to see how much angular momentum a big asteroid impact could have on the moon.

The moment of inertia of a sphere is $I=2/5MR^2$ and we can use $M=7.342e22kg$ and $R=1737.4km$ as the mass and radius of the Moon to get $I=8.86e28$. If we set the angular momentum of the Moon $I\omega=1.5e20$ and solve for $\omega$ giving us a resulting rotation rate change of 1.69e-9 radians per second or about 3 degrees per year. These calculations assume an impact angle parallel to the lunar surface, which is impossible, but forms an upper bound for a momentum change. Higher angle impacts still conserve momentum, but more of the momentum goes into changing the orbital parameters rather than rotation rate.

I calculated the above equation, supposing the Moon's orbital semi-major axis was less than half it’s current value so long ago. If the moon got struck in the way presented above, it would tidal lock again in less than 2 years, rotating less than 6 degrees in that time. So, no, after the Moon was first tidally locked, the same face almost certainly always pointed to the Earth.

Not the answer you're looking for? Browse other questions tagged the-moon tidal-locking or ask your own question.

8
When did the Moon become tidally locked to Earth?