(Thought Question) What would a giant far away mirror look like to a telescope?

If there was a theoretically perfect mirror the size of say, our solar system, somewhere out in space that had a focal point of literally earth. What would that look like to a space or earth telescope? Could it be distinguished from other parts of space? Could you identify earth in it? (A la By putting a mirror in space, would we be able to see into the past?)

If there was a theoretically perfect mirror the size of say, our solar system, somewhere out in space...

...that had a focal point of literally earth...

Rats! I was hoping for a flat mirror so the answer would have been slightly simpler.

It is true that concave mirrors are "magnifying mirrors" and if we stay closer to the mirror than twice its focal point (see below) we can see a magnified image. I don't believe that it provides better optical resolution than a normal mirror, but since the construction of our eyes is fixed (we can't change the optical system nor "pixel density") we use the mirror to "blow up" the image in the same way that a photographic enlarger blows up the image on a negative without improving the resolution of the image. 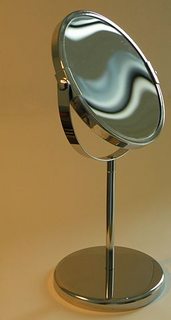 In optics image information is encoded in the wavefront at any point whether in focus at that point or not. If we know the mirror's diameter and distance from Earth, we can apply the principle of diffraction in a simple way no matter how complicated the rest of the optical system.

For a hard-edge circular mirror (top-hat shaped apodization) we know that the Airy disk is the right principle to apply, and a simple definition of resolution gives us

If the mirror were at the distance of Proxima Centauri or only $4 \times 10^{+16}$ meters, then the impact on resolving a wavefront from the perfect mirror based only on diffraction of a circular aperture would be of the order of centimeters!

If the concave mirror brought our image back to us, say on a sheet of paper, it would be incredibly dim i.e. pretty much no photons except from the Sun itself. But if we ignore that then we would see ourselves blurred by about 1 centimeter.

If the image was kilometers in front of us then we could focus a telescope on that image in space and re-image it at the entrance pupil of an eyepiece or on to a sensor.

If the telescope were 1 meter in diameter, we could see roughly a 1 meter wide swath of Earth.

Of course this doesn't work so simply because the mirror would have to be pointed such that the location of Earth 8.5 years ago would be imaged where we were today.

Yes this is kinda possible from a Gedankenexperiment point of view; a 60 AU mirror out at Proxima Centauri with a focal length of twice that distance could produce an image of Earth nearby Earth (light time considerations in force) and we could look at that location in space with a large diameter telescope and see a patch of Earth 8.5 years ago roughly vignetted by the size of the telescope's aperture.

20
By putting a mirror in space, would we be able to see into the past?

7
Can the Gaia telescope detect small temporarily captured asteroids near its Lagrange orbit?
1
Could the Earth be used to cast an arago/poisson spot on something
7
How could a 20 inch space telescope "be able to make out Earth-size planets" orbiting Alpha Centauri?
8
Where exactly is the modification that first corrected the spherical aberration in Hubble's primary mirror?
3
Is it plausible to use other stars for the proposed FOCAL mission instead of the Sun?
3
Why wasn't CHEOPS data taken during passage through the South Atlantic Anomaly downlinked in this case, resulting in gaps in photometry?
2
What would "the next GAIA"-like instrument be like? Could it simply be a 3 to 5x scaled-up version of the same beautiful system?
1
When thermal infrared space telescopes spot asteroids, are they seeing the body's own thermal emission, or reflected TIR from the Sun?