The creation of comets

How are comet and meteors made, and what causes them to travel through space so fast? I have tried researching, but I decided this was the faster way.

From Altweg et al., Fred Whipple first came up with the idea of comets being "dirty snowballs" and Oort came up with the idea that comets originated in a very distant cloud around the Sun (now aptly called the Oort cloud). Matter in the cloud gradually came together through gravity and other processes to form comets. Now we know some comets also come from the Kuiper belt.

Comets are incredibly important in astronomy because they contain pristine matter from the early formation of the galaxy through the accretion of the protoplanetary disk, as shown in this illustration, also from Altweg et al. 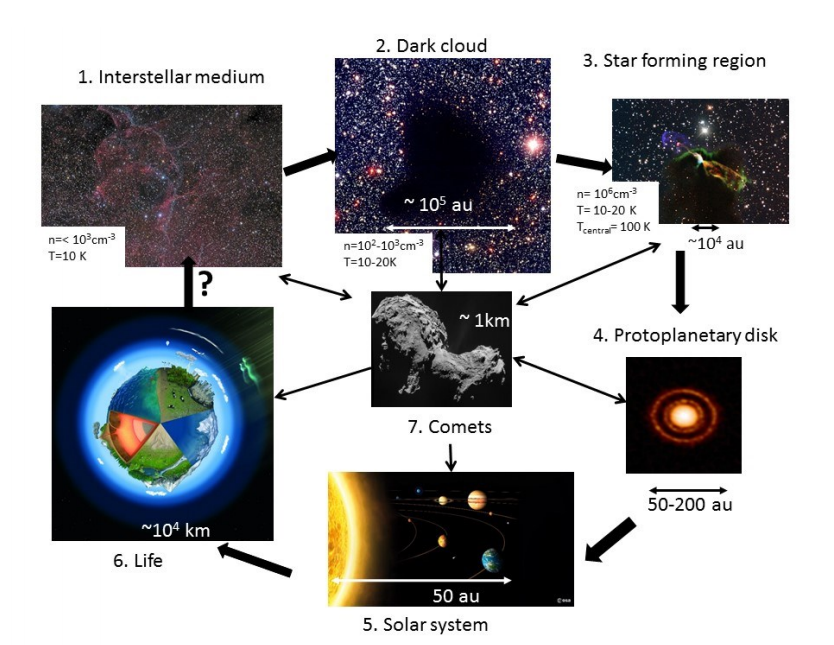 More recent space mission analysis of comets has caused the community to more accurately refer to comets as "icy dirtballs."

Asteroids are not as old as comets in some sense since, according to Raymond and Nesvorny:

The asteroid belt was dynamically shaped during and after planet formation.

The asteroids can differ much more significantly from one another than the comets. Raymond and Nesvorny go on to say:

A number of processes may have implanted asteroids from different regions of the Solar System, dynamically removed them, and excited their orbits. During the gaseous disk phase these include the effects of giant planet growth and migration and sweeping secular resonances. After the gaseous disk phase these include scattering from resident planetary embryos, chaos in the giant planets' orbits, the giant planet instability, and long-term dynamical evolution.

Here is a cartoon from their paper comparing and contrasting three competing solar system development models for the creation of the asteroid belt: 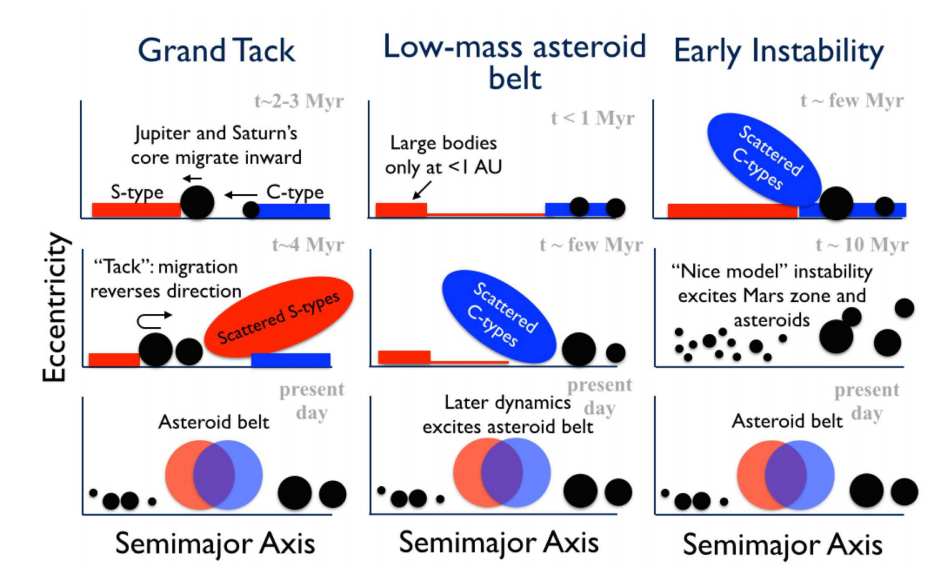 Why do comets and meteors move so fast?

Comets are very slow moving until they get bumped into eccentric orbits with the Sun. When we see them from Earth, they are moving at near their fastest speeds as they pass closest to the Sun, as an example of Kepler's 2nd law.

Meteors and meteorites are mostly moving around the sun at similar speeds as Earth before colliding, but in somewhat different directions. This makes it appear that they are travelling very fast indeed with respect to the Earth as they enter the atmosphere. In addition, they are sped up by Earth's gravitational pull.

Comets and meteors are very different thing, though they are related.

A comet is an "icy asteroid". The formed at the same time as the planets and asteroids, at the birth of the solar system, 4.7 billion years ago, from ices and dust in the nebula that collapsed to form the sun and the solar system. Since ice will evaporate at higher temperatures, comets could only form far out. There are thought to be billions of comets orbiting the sun far beyond the orbit of Neptune. Sometimes one will get a nudge and fall in towards the sun. When it does it starts to evaporate and release its dust. It is the dust and gas that we see as the comet's coma and tail.

Comets do travel fast because they have fallen all the way from beyond neptune's orbit. They don't look like they are travelling fast, because comets are in space and a long long way from us. A comet will slowy move relative to the stars and appear to be in slightly different position each night.

Meteors, on the other hand, are atmospheric events, not in space at all! They are little bits of dust that are falling to Earth. As they fall through the upper atmosphere, they heat up the air until it glows. This is what you see. Meteor also move fast, and because they are much closer to us we see them as a streak of light

How are meteors and comets connected? Much of the dust that forms meteors was orginially released from comets.

Not the answer you're looking for? Browse other questions tagged astrophysics solar-system comets .

9
How do comets' nuclei stick together?

4
How would a planetary defence against comets work?
3
Leonid meteor showers and the Tempel-Tuttle comet
0
safeguards against comets?
3
extrasolar comets - basic question
13
Why would the Perseids meteor rate fall off after maximum faster than the increase before maximum?
4
What's going on in this photo of Halley's comet's tail?
38
How can comets have tails if there's no air resistance in space?
9
Do some comets spin? If so, how fast?