What is the YORP effect exactly? Is it just the non-central component of the Yarkovsky effect?

This answer to Where have all the Vulcanoids gone? links to the aptly-titled The YORP Effect Can Efficiently Destroy 100 Kilometer Planetesimals At The Inner Edge Of The Solar System which says in part:

... The YORP effect destroys Vulcanoids by spinning them up so fast that the gravitational accelerations holding components of the body together are matched by centrifugal accelerations, this causes the body to rotationally fission. i.e break apart. We calculated the timescale of this fission process for a parent Vulcanoid and for each of their subsequent generational fragments. We show that objects with radii up to 100 kilometers in size are efficiently destroyed by the YORP effect doing so in a timescale that is much younger than the age of the Solar System...

Tha answer also links to the explanation of the YROP effect in The YORP Effect and Bennu which says:

The YORP effect is a similar phenomenon that affects the rotation rate and pole orientation of an asteroid. YORP is an acronym that combines four scientist’s names: Yarkovsky, O’Keefe, Radzievskii, and Paddack. Building on the work of Yarkovsky, V. V. Radzievskii showed in 1954 that variations in albedo across the surface of a small body in space could increase its rotation rate. This phenomenon is essentially the Crooke’s radiometer effect. Stephen Paddack and John O’Keefe, who were separately working on the origin of tektites and interplanetary dust, went on to show that an object’s shape strongly influences the change in rotation. David Rubincam synthesized these ideas in 1999, and showed that YORP creates a thermal torque akin to a “windmill” effect on asteroids. This torque can modify the rotation rate and obliquity of an asteroid, depending on the external geometry of the body.

This is frustrating because of course the Crooke's radiometer works by interacting with the molecules of the low pressure gas intentionally included inside the glass bulb, and not by radiation, but at least we get the idea that a net torque is produced due to a non-uniformity of some optical property.

Wikipedia's Yarkovsky–O'Keefe–Radzievskii–Paddack effect works hard to try to explain but the explanation is long and I am not confident it's actually accurate.

Answers to What is the difference between the Yarkovsky effect and YORP effect? touch on this but do not answer this question.

Question: What is the YORP effect exactly? Is it just the non-central component of the Yarkovsky effect?

The YORP effect only describes the changes to the rotational momentum of the body:

Consider a perfect uniform sphere in orbit around the Sun. For any point on the sphere, the average direction of re-radiated photons will be normal to the local tangent plane (or directly opposite the center of gravity). In this case, we expect a Yarkovsky effect (change in orbital parameters), but no YORP effect (change in rotational momentum). Graphic from this source. 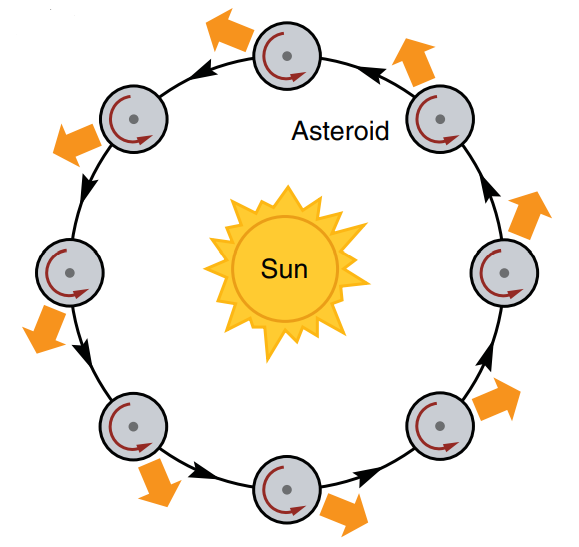 In contrast, consider an irregular body with a huge flat face offset from the center of gravity. When photons are re-radiated from the flat face, on average they will impart some angular momentum change (YORP effect) and some orbital parameter change (Yarkovsky effect).

Yarkovsky only considers the center of mass recoil from thermal radiation of a rotating body in sunlight, is YORP just the tangential component of this recoil?

The forces causing the YORP and Yarkovsky effects are not tangential in general. For a recoil for some impulse on a sphere, the rotational and linear forces imparted are tangential. However, for an irregular shape like a rod, we wouldn't expect the two forces to be tangential. Here is a little drawing (extremely exaggerated for effect): 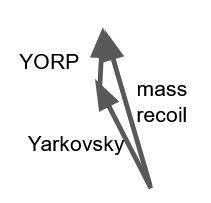 They YORP and Yarkovsky forces don't necessarily need to be at right angles. In three dimensions, sorting out the forces can get extremely complicated. It can be quite complicated for a rod even if the reaction mass vector is at the tip. It's hard for me to imagine the recoil from a "crescent moon" shaped asteroid that has a center of mass exterior to the asteroid body.

Or does it require the body to be non-uniform in order to spin-up the body?

The body must be irregular in shape to spin it up. A perfect sphere with a non-uniform surface would not be subject to the YORP effect. This is as mentioned above, since on average, photon emission at a specific point will be 90 degrees from the tangent plane, effectively canceling all YORP effects from individual emissions.

Would a uniform sphere in fact spin-down?

Again, a sphere would not have any YORP effects because the average re-radiation vector would be perfectly opposite the center of mass.

Not the answer you're looking for? Browse other questions tagged solar-system asteroids rotation planetary-formation asteroid-evolution or ask your own question.

13
What is the difference between the Yarkovsky effect and YORP effect?
5
Where have all the Vulcanoids gone?
3
Are there any bodies in the solar system whose rotation is almost tidally locked or barely tidally locked?

4
What is the largest object on which the Yarkovsky effect has been observed?
3
Orbiting and landing on non-sperical objects
10
Why do planets tend to rotate in the same direction although they have formed from tumbling asteroids?
1
Is it ever possible that the graviation from the mass of kinetic rotational energy will overcome centrifugal force?
3
What effect does the Moon have on the near Earth asteroid population?
1
What is meant by the bifurcation of hydrostatic equilibrium shapes in planetary formation?
13
What is the difference between the Yarkovsky effect and YORP effect?
9
How a star's rotation affects a star in the main sequence?
5
Is a three body gravitating system doomed to collapse?