Why are asteroids with circular orbits rare?

Regarding this excellent question by Swike: Why are asteroids with zero orbital inclination rare?, I recently proposed that orbits with zero inclination are rare as a natural result of the statistical distribution of orbital revolution axes extended onto the celestial sphere. 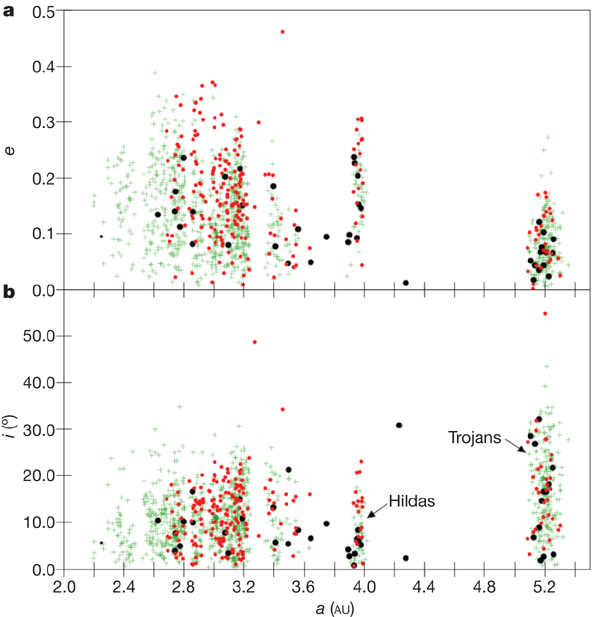 Orbital eccentricities cannot be normally distributed around zero, since the minimum eccentricity is zero.

Thus, in the same way that the Maxwell-Boltzmann distribution for particle speeds is zero at zero speed and peaks at finite speed, then no asteroids have exactly zero eccentricity and we would expect a peak at higher eccentricities.

Of course asteroids are not expected to be represented by this random distribution, since their dynamical histories likely have them being perturbed away from very low eccentricity orbits induced by the drag of a gas/dust disc in the early solar system. Nevertheless, any initial perturbation moves them away from zero eccentricity and subsequent random perturbations might be expected to make them head towards the thermal distribution. I would guess that objects in the top end of the thermal distribution must also then just get selected out - falling into the Sun, hitting planets or getting ejected out of the main asteroid belt.

Not the answer you're looking for? Browse other questions tagged asteroids orbital-mechanics eccentric-orbit or ask your own question.

18
Why are asteroids with zero orbital inclination rare?

16
What are Trojan Asteroids and where are they located?
3
What is the danger for Ceres of collision with other asteroids?
4
How are boulders formed on asteroids?
12
Are the Trappist-1 planets in stable orbits?
2
Data on the composition and orbits of asteroids
1
Are there any known asteroids with average density similar to that of Earth's?
0
Are Trans-Neptunian Objects (TNOs) asteroids?
18
Why are asteroids with zero orbital inclination rare?
9
Orbits of Trojan Asteroids