Why is the flux density and amplitude different for galaxies than stars?

This might be a simple question, but I'm having a hard time answering it myself - or at least answer it correctly, I think.

I'm sitting with different spectrals; many for stars and one for a galaxy. The one for the galaxy has a flux density of 1e-13, while the stars range from 1e-7 to 1e-12.

My question is: why is galaxy's flux density lower than even the lowest stars? The galaxy also have very characteristic emission peaks. How is that reflected in the spectrum of the stars, or is that another phenomena?

To clarify, I am talking about a plot like this. I had to scale the stars spectrum down by a lot in order to match the galaxy's spectrum. Why is that?

Also why can't the stars produce the same spiky amplitudes as the galaxy? Is it because of the galaxy emission lines from billions of stars and vast amounts of dust and gas? 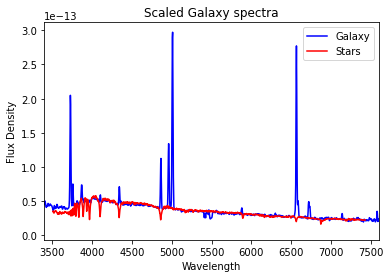 A galaxy is obviously going to be much more distant than the stars. On the other hand the galaxy contains a lot of stars which will contribute to the overall spectrum.

Whether the galaxy or a star will be brighter will depend roughly on the ratio of $N/d^2$, where $N$ would be the number of stars and $d$ would be the distance to the galaxy.

What your plot has done is empirically remove this factor by linearly scaling the galaxy spectrum so it matches with the stellar spectrum over most of the wavelength band shown.

On the other hand, the light from a galaxy is not only made up from the stars that are within it. There are contributions to the light from (for example) hot gas near any active galactic nucleus and also relatively hot gas in the interstellar medium, possibly associated with bursts of star formation, supernova remnants and nebulae ionised by hot stars. These latter contributors are responsible for the emission lines seen in the galaxy spectrum.

Not the answer you're looking for? Browse other questions tagged star galaxy spectra or ask your own question.

29
How many stars and galaxies can be seen by the naked eye?
2
why are galaxies different in color?
1
Central temperature and pressure for constant density vs linear density model of stars
11
Are there stars with an average density greater than the central density?
4
Why do other galaxies have such a low surface brightness?
2
Brightness and flux density