DAMIT how do they get 3D shape and rotational trajectory of a tumbling asteroid from photometry?

This question asks about an algorithm used in Project DAMIT.

The web site says that the reconstruction of the shape and tumbling of the asteroid is done as described in their documentation page:

DAMIT contains asteroid models that were derived using the light-curve inversion method developed by Kaasalainen & Torppa (2001) and Kaasalainen et al. (2001), combined with other inversion techniques in some cases. Each model in DAMIT references the original paper(s) where it was published. Please note that the models presented in DAMIT may differ from those published in the original papers. The main reason for this is a limited dataset used in the original publication and/or a narrow range of periods scanned during the inversion.

Question: As both parts of the paper are paywalled in Icarus is it possible to generate a straightforward description of the basic idea behind how this reconstruction process generates a shape from an $I(t)$ plot?

For delay-doppler radar observations there is a rich set of data available, but here there is only intensity vs time. How can a 3D shape be unambiguously determined from what looks like a pretty chaotic set of data?

I plotted the data just for kicks. 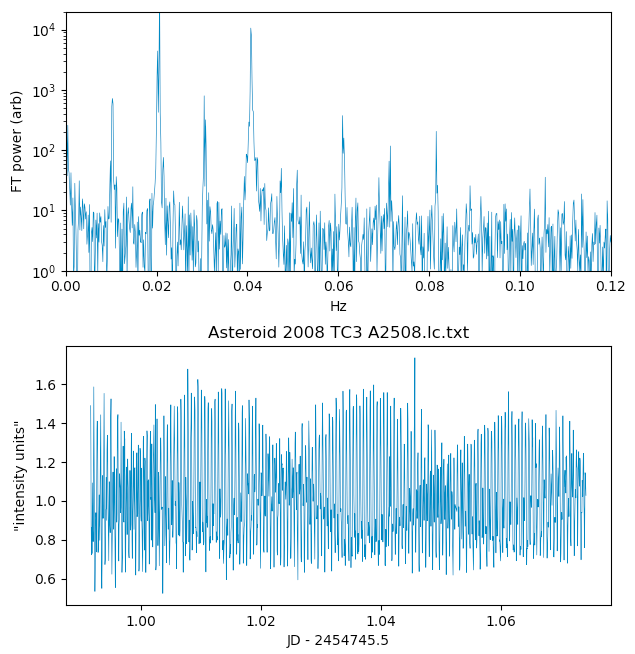 Browse other questions tagged observational-astronomy data-analysis photometry modeling or ask your own question.

15
What percent of planets are in the position that they could be viewed edge-on from Earth? (and thus able to undergo transits)
2
How do astronomers at SETI know if they received intelligent radio signals from other planets?
1
How do I get flux density when I have mJy/beam , beam size and pixel size in an astronomical image
5
How do observational astronomers manage streaks and other artifacts from objects in Earth Orbit?
3
How was this interstellar fireball observed and its trajectory analyzed?
4
How to model and subtract nebular emission lines from stellar spectrum
2
How do they know the non-uniformities seen on the disk of π¹ Gru are real and not artifacts?
1
How can I get/generate/extract PSF image from galaxy .fits image?
3
How was a rock on the surface of asteroid 101955 Bennu first observed from Earth (Benben Saxum)?