Why are relativistic jets perpendicular to the accretion disk?

From looking at many images (artist's rendering and computer-generated) at black holes, I've noticed that the relativistic jets are always perpendicular to the accretion disk. Is this always true, and if so, why does it happen? 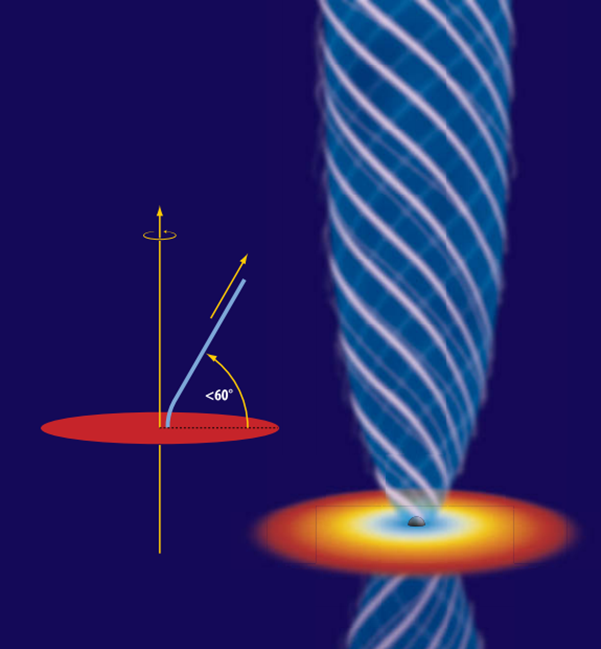 The energy source for a jet is probably the accretion disk itself. As the infalling material gains speed, it begins to grow into a disc of matter that revolves around the black hole. In the accretion disk, the density becomes greater and greater the closer the matter gets to the black hole. This results in increasingly violent collisions between the particles. The enormous increase in particle collisions suddenly heats up the gas so much that it explodes and drives the matter back out. However, this material cannot shoot through the surrounding material in the disc. It can only escape through the central hole of the donut-shaped accretion disc: Two symmetrical jets form that shoot outwards, which are focused by the aforementioned "magnetic field tunnels" This mechanism would be suitable for radio galaxies; however, their jets only have a speed of about a quarter of the speed of light. The jets of black holes reach speed of close to the speed of light (99% of c).

Jets in AGN, however, reach speeds far above the maximum orbital velocity of an accretion disc: they are accelerated to a fraction of a percent of the speed of light. Such a flow can therefore not only be generated with gravitational energy released by the infalling matter. But there is another source of energy that can be tapped: the rotational energy of a rotating black hole.

The surface area of a black hole can never decrease. Since a rotating hole has a smaller surface area than a non-rotating hole of the same mass, there is no principled reason why rotational energy cannot be extracted. The mechanisms that explain this process are based on the high similarity between a black hole and an ordinary electrical conductor. This analogy can be illustrated by imagining a charge being brought closer and closer to a non-rotating black hole. When the charge is far from the hole, the electric field lines protrude radially from the charge. But as the charge moves closer to the horizon, the field lines become more distorted: They "wrap" around the hole, so that a distant observer would see the electric field as arising at the surface of the horizon. It is as if the charge has spread across the surface of the hole, as it would if the "surface" were an electrical conductor.

A rotating black hole behaves like a rotating conductor. Let us assume that the gas approaching a rotating black hole has a magnetic field. When a charged particle, such as an electron, moves in a magnetic field, it is acted upon by a force that is perpendicular to its direction of motion and perpendicular to the lines of the magnetic field. The force causes the electron to deviate from the direction of motion. The electrons in an accretion disc are free because the gas in it is in a plasma state in which the electrons are no longer bound to their atomic nuclei. The accretion disc rotates with its axis parallel to the lines of the magnetic field. The free electrons in the disk will tend to move either towards the centre, or away from the centre depending on the orientation of the magnetic field and the direction of rotation of the disk. In either case, the accumulation of electrons in one part of the disc and a corresponding minority of electrons in another part of the disc will create an electric potential. Conducting gas bound to the magnetic field lines transfers this electric potential to a circuit between the poles of the black hole and its equator. The jets use this circuit, which resembles a battery, as an energy source. The energy that is extracted from the hole accelerates charged particles and ultimately drives the jets. This creates a drag on the rotation of the black hole, which is thus slowed down. 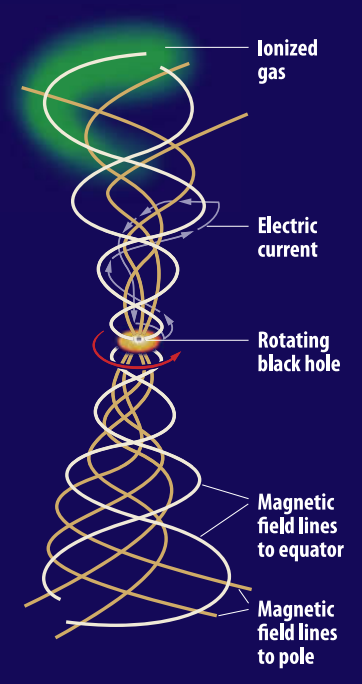 The huge voltage drop in this circuit could actually be responsible for the creation of the matter that flows in a jet. At such a large voltage, electrons are accelerated so strongly that particles of matter and antimatter - mostly electrons and positrons - are created from the vacuum of space.

Mainly took this from here. Went on a little bit of a tangent but I hope I answered your question. I myself am actually not sure about why these magnetic field lines diverge from a straight course and "spread" themself across the surface of a black hole, but maybe someone in the comments can explain that.

Not the answer you're looking for? Browse other questions tagged black-hole accretion-discs .