Do ASKAP and ALMA have "fast dump" interferometric modes? Can they see and perhaps report Fast Radio Bursts in real time?

Chatterjee et al 2017 The direct localization of a fast radio burst and its host nicely shows a VLA detection of a repeating FRB in 5 millisecond steps nicely demonstrating the dispersion slope matching that of FRB 121102 and when de-dispersed providing a precise epoch for the particular event that could be potentially matched to other simultaneous observations while simultaneously providing the spatial resolution of an interferometric radio telescope array.

Kumar et al. 2019 Faint Repetitions from a Bright Fast Radio Burst Source show ASKAP measurements of repeating FRB 171019 with 2.62 and 1.26 millisecond resolution. However the array was operated in fly's eye mode with each dish pointed in a different direction, so if I understand correctly, interferometric resolution from the array was not available.

I haven't found any reports of or references for ALMA FRB detections. 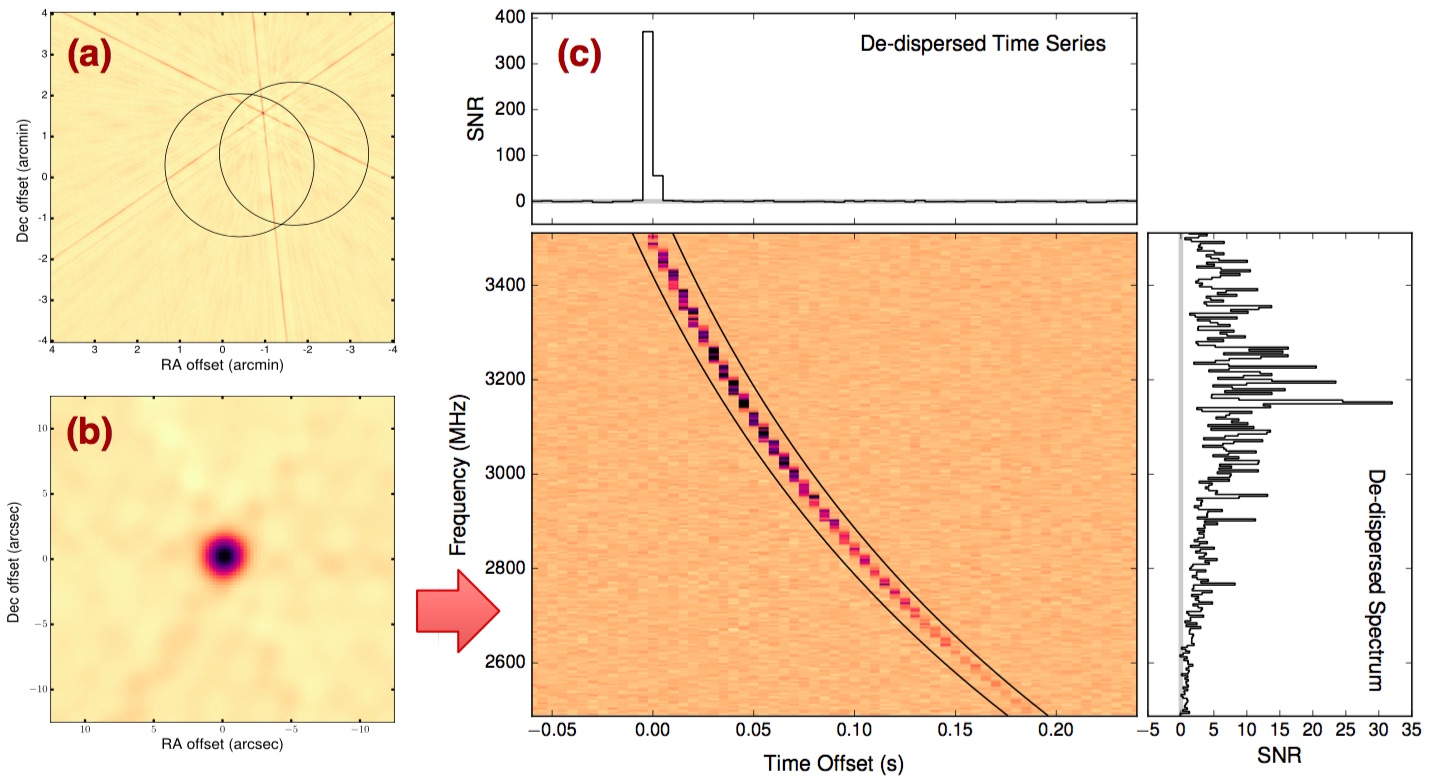 Figure 1 VLA detection of FRB 121102. (a) A 5-ms dispersion-corrected dirty image shows a burst from FRB 121102 at MJD 57633.67986367 (2016 Sep 02). The approximate localization uncertainty from previous Arecibo detections (3' beam FWHM) is shown with overlapping circles. (b) A zoomed in portion of the above image, de-convolved and re-centered on the detection, showing the ~0.1" localization of the burst. (c) Time frequency data extracted from phased VLA visibilities at the burst location shows the $\nu^{-2}$ dispersive sweep of the burst. The solid black lines illustrate the expected sweep for DM = 558 pc cm^−3. The de-dispersed lightcurve and spectra are projected to the upper and right panels, respectively.

Short answer: No and yes.

Do ASKAP and/or ALMA have "fast dump" interferometric modes? Or do they have at least some way to extract dispersion of transient events at the millisecond level?

ASKAP has FREDDA which searches in total-intensity filterbanks (aka dynamic spectra) and triggers the voltages for imaging or localizing the FRB. general disclaimer that I am not 100% sure but do know about their searchpipeline

ALMA operates in a whole different frequency regime ($\sim 230$ GHz). Dispersion delay scales $\sim \frac{1}{\nu^3}$ where $\nu$ is the observing frequency. So you'd need ridiculously high DMs to produce a sweep there. You could say there is almost no dispersion at these frequencies. There is also the question if FRBs are produced in that regime. The highest frequency any FRB (repeating or one-offs) has been detected is around $8$ GHz (FRB121102, Gajjar+2018 etal).

Having said all of that, the essence of what you are suggesting is captured in realfast which runs commensally on the VLA and does fast de-dispersed imaging at around $1-4$ GHz. Meaning, it produces an image on the milli-second timescale for many dispersion sweeps and then searches for bursts. There is also an AI running which vets many of the candidates it gets to test. All of this is done in realtime.

Check out this realfast detection of a periodic FRB detected last April.

Can either see and perhaps report Fast Radio Bursts in real or near-real-time?

These pipelines have the motivation to save the raw data and so employ realtime searches which issue triggers and then slices of the raw data are saved. There is AI running which decides if the trigger is to be issued or not. And even with it, there's a lot of False positives.

Reporting FRBs is a different story. Usually, confirmed FRBs are reported in Astronomer's Telegram (ATel), or Transient Naming Server (TNS). There is no one unified network (like LIGOs-VIRGO-FERMI) which shares triggers because of various reasons. Or, you could choose to do follow up observations and then report.

Further to Surya answer, yes ASKAP can and does detect FRBs in semi-realtime. The reporting to the outside world is far from realtime, unfortunately.

In summary an incoherent sum all antennas is made (ie sum of the power) with coarse spectral resolution (1 MHz) and relatively short integration time (~1 millisec). This data is searched in realtime and FRB candidates trigger a dump of the voltage data. This voltage data can be processed using normal interferometric software (the DiFX software correlator, usually used for VLBI). Currently this second stage processing, which yields sub-arcsecond position to the FRBs) is run manually so can take a few days to get a position. In time the plan is to speed up this processing step. However to get accurate astrometry, very careful calibration is needed so having sub-arcsecond positions may be awhile away. Note because ASKAP uses phased array feeds (PAFs), it has an enormous field of view (30 square degrees).

ASKAP is currently working on an upgrade to the FRB backend to make snapshot images of the sky. This will increase the sensitivity by a factor of 6 (coherent versus incoherent averaging) and in principle allow accurate positions to be determined within seconds.

Not the answer you're looking for? Browse other questions tagged data-analysis radio-telescope fast-radio-bursts dispersion time-domain-astronomy or ask your own question.

3
Would "layered" radio interferometry work?
2
What are the one-dimensional observables that can reveal the matter clustering properties of the Universe?

4
What is the highest granularity focal-plane array on a dish radio telescope? Or is this the ONLY ONE?
3
How could a neutron star cause repeated 'fast radio bursts' detected coming from outside of the galaxy?
1
How do ASKAP's focal plane phased array feeds interact with the entire array phasing?