I have to do a short calculation, but, quite frankly, I have no idea how to even start...

Suppose you have a 10-m telescope (f/10) with an infrared camera that observes at 10 micrometer. The seeing is 2 arcsec (FWHM of the PSF, 2”= 1/100000 rad) and you would like to implement an adaptive optics system.

The question is: How many lenslets do you need in the Shack-Hartmann wavefront sensor array? Below is a picture of the working principle of such an array. The telescope would also include a coronagraph, but I think (might be wrong) you don't need that information for this calculation. 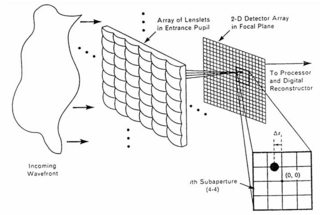 Generally speaking as many as possible because the number of lenslets determines the lateral wavefront resolution. But in reality there are a few factors to be considered.

Say your lenslet array is of focal length $f$ and subaperture size $D$, given a maximum desired detection angle $\alpha$ (in your case is $2'' \approx 1\times10^{-5}\, \text{rad}$), there is the following relationship:

$w \in \mathbb{R}^m$: Measurement wavefront of a lenslet array of number $m$.

$c \in \mathbb{R}^n$: Correction wavefront of the deformable mirror that has $n$ number of actuators.

An adaptive optics (AO) system works by solving a linear system to output $c$ given $w$:

So for this design, we conclude it satisfies the requirement of this question.

Not the answer you're looking for? Browse other questions tagged optics infrared adaptive-optics instruments or ask your own question.