Does the earth spiral around the sun's movement/motion path?

I have watched the following video (How Earth Moves by Vsauce) regarding how earth moves:

Here are some screenshots:

I have some questions:

P.S. My knowledge of astronomy/physics is very limited. I have tried my best to be as clear as possible. Sorry for any confusion. Thanks.

Does the earth spiral around the sun's path as it is shown in the video (exact time is 19:49) and screenshots?

The Earth does spiral around the Sun's path, but not quite as it's shown in the video.

Is the spiraling movement caused by sun movement (on its path shown above) where the sun is dragging the earth (and other planets)?

Does the earth go in front of the sun then back, then fourth and back like it is shown on the video? I see both the sun and earth racing with each overtaking the other over and over. Is this assumption true? In this manner, would earth, at one point in time, be closer to the destination where the solar system is heading (I think they call the destination Vega) than the sun?

If you consider a plane tangent to the Sun's velocity vector, then the Earth will pass across that plane twice per year, appearing "in front of" and then "behind" the Sun. This is simply a geometric result since the Earth and Sun share another plane. I wouldn't call any future position of the Solar System a "destination" without evidence the Solar System was sentient, but I am not a philosopher.

I am working on a poetry piece. If I mention that earth and sun are locked in a never ending race with each taking the lead (earth moving in front of the sun's path / winning) and earth actually dropping out of the race (spiraling/moving out the race and falling behind), that they are destined to never meet (collide), would I be correct?

We haven't ruled out the possibility that the Sun may someday envelope the Earth: What will "the Earth being consumed by the Sun" look like?. Also, the Earth isn't likely to leave its orbit before that time, but the Solar System is chaotic on long time scales. However, your poem would be consistent with current models, and we (humans) don't conclusively know how the Solar System will end. So my two cents is that your poem doesn't contradict modern astronomy. Besides, what's the use of a poetic license if you don't use it?

It's sort-of real but not necessarily the way it's shown. The Earth orbits the Sun in roughly a circle, and the solar system is moving relative to the center of the galaxy in roughly a straight line (on the time scale of thousands of years and more) but those squiggles shown representing the motion of a point on the Earth are horrible!

The graphic makes it look like it has convex and concave points but that's only because the scale is messed up by ten thousand times! For more on this see this answer to Why is there no concavity in the orbit of the moon around the Sun? A sampling: 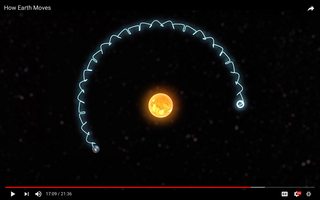 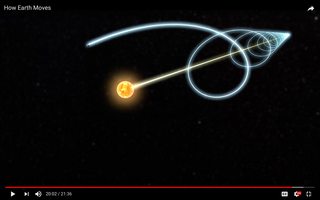 Left is messed up, however right is roughly correct. (click for full size)

Richard Feynman mentions the ball in the wagon. While it's not the same scenario it may help us to start thinking about what "moves relative to" means.

Not the answer you're looking for? Browse other questions tagged the-sun orbit planet earth or ask your own question.

11
Why is there no concavity in the orbit of the moon around the Sun?
2
Will Earth rotate backwards in the future?
4
Moons with curlicue paths around our Sun?
2
What will "the Earth being consumed by the Sun" look like?
2
Why is the Solar Helical (Vortex) model wrong?

3
Is the Earth Really Spinning? (honest question)
2
Can we apply Kepler's law of planetary motion to the moons motion around the earth?
1
Does earth have retrograde motion?
8
What point does Earth actually orbit?
46
Does the sun cross other spiral arms in its movement around the galaxy's center?
4
How bright is the Sun in S-band?