Is there convection in Mars' mantle?

There are several ways to look at this.

where $\rho$ is the mantle density, $g$ is gravitational acceleration, $\alpha$ is the thermal expansion coefficient, $\Delta T$ is the difference in temperature over the convective layer of thickness $d$, $\eta$ is the viscosity, and $\kappa$ the thermal diffusivity. It is generally considered that convection happens when $Ra > 1000$, and higher $Ra$ mean more vigorous convection. $Ra$ for Mars is estimated at $10^6$ by Mulyukova & Bercovici 2020 (compared to $10^7$ for the Earth), meaning that there is convection in Mars' mantle, although less vigorous than on Earth.

Another approach is to look at some geological features of Mars that can provide constraints on the internal dynamics of the planet. For example, recently active point-source volcanoes, such as Olympus Mons, suggest the presence of a mantle plume—thus convection—rising from beneath (Li & Kiefer 2007). Likewise, the presence of mantle plumes/convection can explain variations in lithospheric thickness (Kiefer & Li 2009).

A study by Stern et al. (2017) used volcanisms, faults and impacts to define a "Tectonic Activity Index" (TAI) for 26 planetary bodies, ranging from 0 to 3. They found that Mars has a TAI of 2, less than the Earth and Venus (3), but still inferred to be "tectonically and convectively active" (bodies with TAI < 2 are inferred to be tectonically dead). They think that Mars actually represents the transition between active and dead bodies:

The present tectonic style of Mars represents an almost completely stabilized stagnant lid [SL]. Here, a single upwelling mantle plume, pouring lava out at the same sites for hundreds of millions of years, produced the immense Tharsis rise and volcanoes (Zuber, 2001). When these last few mantle plumes are extinguished, tectonic style transitions to the final SL stage – planetoid death. This stage is typified by Mercury and Earth's moon, bodies with ultra-thick, ultra-stable lithospheres 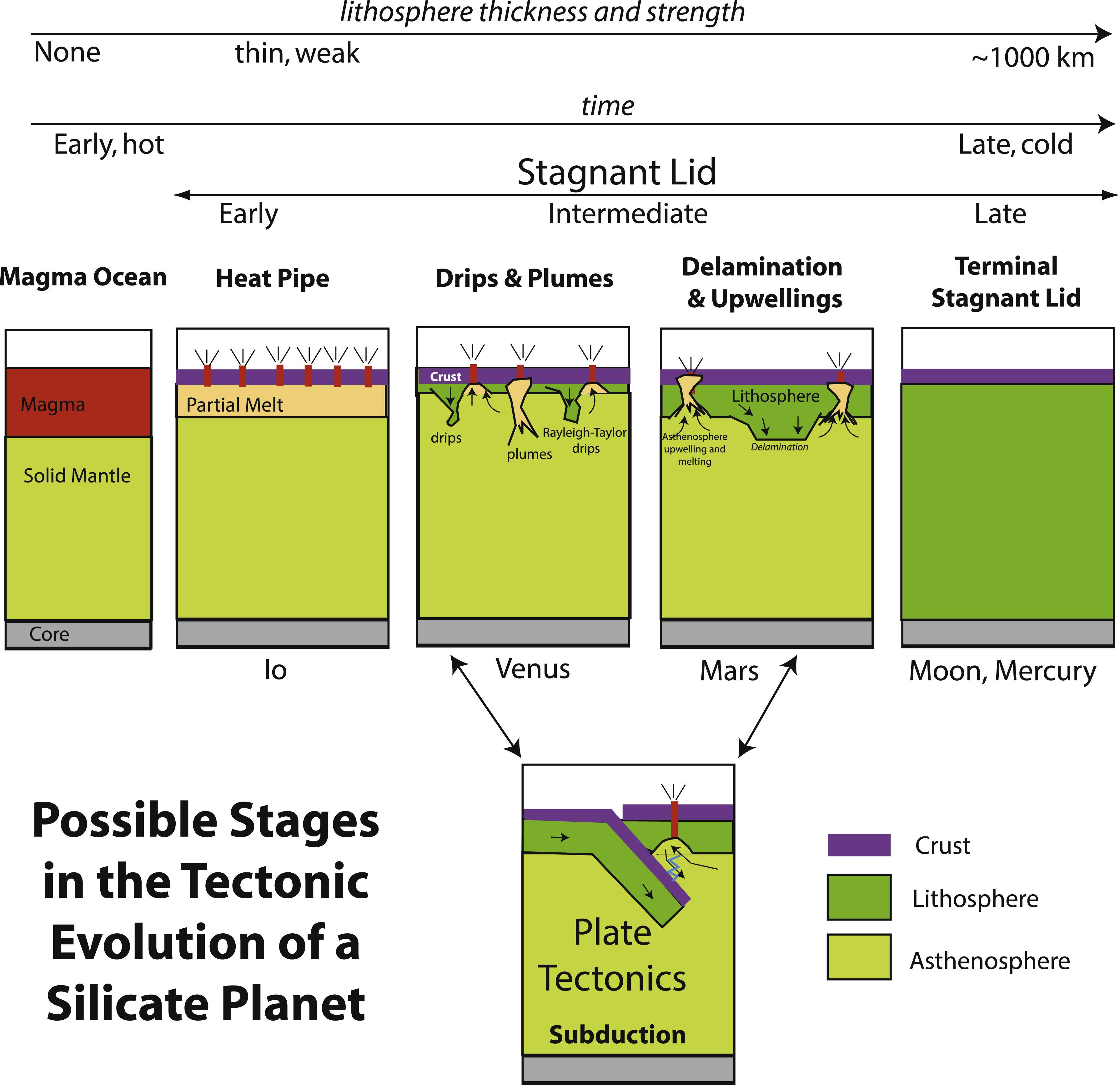 Possible evolution of magmatotectonic styles for a large silicate body, like the Earth. Plate tectonics requires certain conditions of lithospheric density and strength to evolve and is likely to be presaged and followed by stagnant lid tectonics. After Stern et al. (2017) (CC BY-NC-ND 4.0)

1
Could ancient tectonic activity on Mars be due to it having oceans of sulphuric acid?

14
Are there large underground caverns on Mars?
3
Terminology: planet plus atmosphere vs planet and atmosphere as separate things
4
Is there a consensus as to where terrrestrial planet atmospheres in our solar system came from?
1
Could an Earth-sized planet be cold?
3
Could Mars have oil?
12
Are there Earth rocks on Mars?
3
Are all the planets differentiated?
1
Could ancient tectonic activity on Mars be due to it having oceans of sulphuric acid?