Understanding the angular peaks in the CMB power spectrum

I have read up quite a bit on the CMB power spectrum, but one feature evades my understanding. The first peak is often referred to as the "first compression peak", meaning that the plasma had time to compress exactly once. The way I imagine this is that we have a central overdensity, and then a ring of plasma around it which moves closer, i.e. the ring is being compressed. In the same vein I think of the second peak as corresponding to the ring being compressed and then rarefacted. But I don't see how this fits in with the power spectrum: the first peak corresponds to a larger separation between the center and the ring, while the second peak corresponds to a smaller separation. With the way I have described it, I believe it should be the other way around: compression should correspond to smaller scales, while rarefaction should correspond to larger scales.

What am I misunderstanding about this? 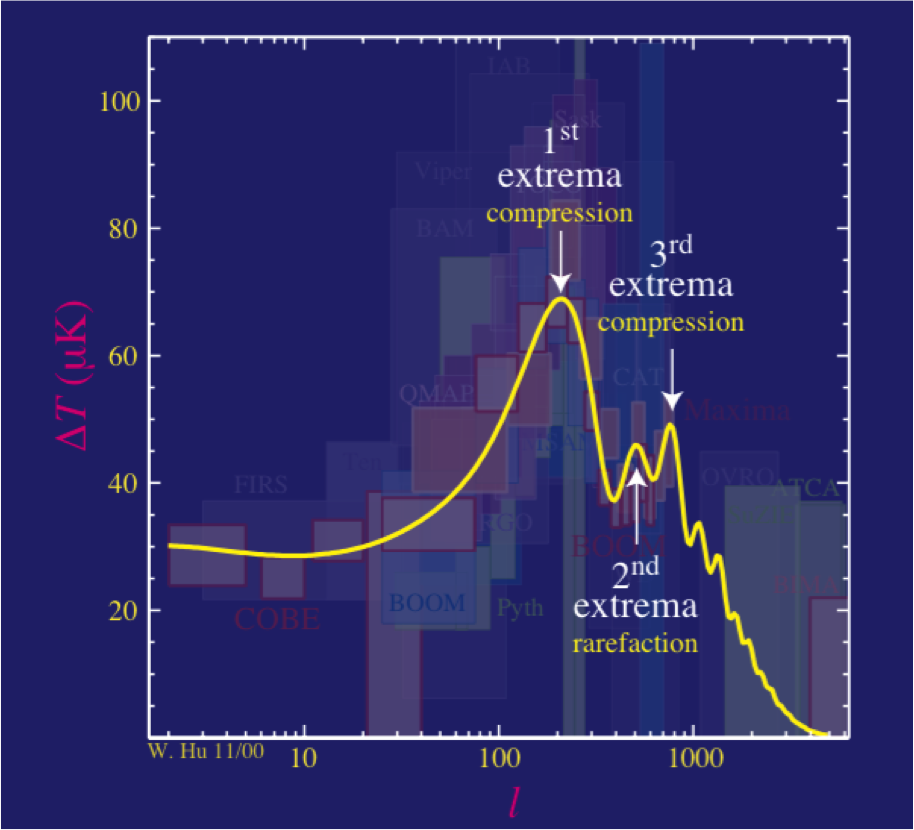 My attempts at a short answer failed, so here is my best shot at an explanation.

When you look at what the photon-baryon plasma does in the dark matter background, you will bump into an equation that is almost the equation for a harmonic oscillator, but it contains a time dependent quantity $\chi = \frac{3\rho_B}{4\rho_\gamma}$ that spoils the fun. It is, however, possible to approximate the solution: $$\Theta_k(\tau) + \Phi_k \approx A_k \cos\Big(k\int_0^\tau c_s(\tau')d\tau'\Big) - \chi\Phi_k$$ where $\Theta$ is the temperature fluctuation $\delta T/T$ (in Fourier space), $\tau$ is the conformal time, $\Phi$ is the potential caused by dark matter and $c_s$ is the sound speed in the plasma. The observable quantity is $\Theta_{0k} = \Theta_k + \Phi_k$. These are the intrinsic temperature fluctuations plus the background potential. The prefactor $A_k$ is determined by evaluating this expression at $\tau = \tau_{LS}$, the moment of last scattering. This then yields: $$\Theta_{0k} = \frac{1}{3}(1 + 3\chi)\Phi_k\cos(k\lambda_s) - \chi\Phi_k $$ with $\lambda_s = \int_0^{\tau_{LS}} c_s d\tau$ the sound horizon (i.e. the distance acoustic waves can travel in a certain amount of time). The quantity $\Theta_{0k}$ is called the monopole contribution to the CMB. The dipole contribution, that is due to the Doppler effect, is much smaller and I will not consider it here.

Let's take a look at an overdensity ($\Phi_k < 0$) and place our coordinate axes right in the middle of it. At the "time of the Big Bang", $\tau = 0$ the monopole is $\Theta_{0k} = \frac{1}{3}\Phi_k <0$. The argument of the cosine is 0, so the cosine itself reaches its maximum value. Half a period of the cosine later: $\Theta_{0k} = -\frac{1}{3}(1 + 6\chi)\Phi_k$, which is a lot larger! In the standard cosmological model, $\Phi_k$ remains constant, so the only thing that could have gotten bigger is the intrinsic temperature fluctuation $\Theta$. This temperature fluctuation is directly linked to the density fluctuations of the photons and baryons.

What happens intuitively is the following: the baryons love falling into dark matter potentials. Baryons are approximately pressureless, so nothing would impede them to do so if it weren't for the photons to which they are coupled before $\tau_{LS}$. The photons are dragged down into the potential well by the baryons, which makes them hotter (photons do have pressure), so thermodynamics tells them to cool again by escaping the well. It's much harder to get out of a potential well than it is to fall into one, so the amplitudes of compression ($B$ and $\gamma$ falling into a well) and expansion ($\gamma$ pushing $B$ out of the well) are not equal.

The first peak reaches maximal compression at last scattering. It is huge because it is least affected by Silk diffusion. It corresponds to a large angular scale (compared to the other peaks) because its wavelength is $\lambda = 2\lambda_s$ and is therefore the largest fluctuation.

And finally, I think you already found Wayne Hu's website, but here is the link to a gif that shows you the oscillation of the baryon-photon plasma in a dark matter potential well.

Not the answer you're looking for? Browse other questions tagged cosmic-microwave-background .

15
How to determine scalar-to-tensor ratio r from CMB polarization spectrum?
7
Is CMB Polarization simply the temperature gradient of the CMB?
7
Why can we still 'see' the CMB
23
How fast are we moving relative to the CMB?
7
Understanding The Fluctuations In The CMB Maps
5
Understanding better the factors on $C_l$ in Angular power spectrum and Relation with Matter power spectrum
8
Why was the Cosmic Microwave Background (CMB) released at a blackbody temperature of 3000K rather than 30,000K?
3
Back when the CMB was predominantly in the visible spectrum, would it have been visible to the naked eye?