It is known that all the mass in the Solar system moves around the Barycenter.

For the two focal points in Kepler's law; is the first focal point $F_1$ a Heliocenter? Or is it actually a Barycenter?

If the $F_1$ is a Heliocenter, then, can the same exact ellipse and eccentricity of orbit be maintained by adjusting the second focal point $F_2$ and taking Barycenter as $F_1$ instead of Heliocenter? 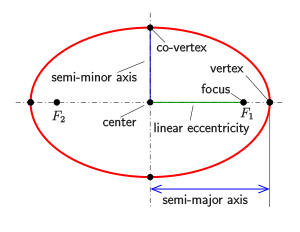 Kepler's laws and the associated orbit only hold for a two-body problem, so the 'barycenter' in the question can only be understood as the center of mass of the sun and a particular planet (ignoring the other ones), not as the solar system barycenter. And in this sense the convention is to take the sun at the focus, which means the semi-major axis is the (maximum) distance between the sun and the planet.

If you define the orbits with regard to the center of mass of the two bodies, the semi-major axis is reduced by the mass factor $m/(M+m)$ for the planet and $M/(M+m)$ for the sun whilst the eccentricity as well as the orbital period stays the same. However, with the center of mass only a fictitious point that does not correspond to a physical object, this hardly makes sense in practice.

Planetary orbits are normally described as heliocentric, but it is possible to describe them from a barycentric point of view. JPL Horizons (https://ssd.jpl.nasa.gov/horizons.cgi) provides for both possibilities.

If we plotted the orbits of the innermost planets in our solar system, they would be closer to ellipses with the Sun at one focus.

If we plotted the orbit of Jupiter, the biggest "gravitational bully" in the solar system (it messes with everything!) it would be closer to an ellipse with the Sun-Jupiter barycenter at one focus.

It gets a little complicated out there because the next three planets (Saturn, Uranus and Neptune) also push the Sun around a lot. We might think that lightweight Neptune wouldn't do much, but it's larger distance makes up somewhat for its smaller mass, since the center of mass is weighted by the distance*mass product.

Not the answer you're looking for? Browse other questions tagged orbit planet orbital-mechanics orbital-elements kepler or ask your own question.

9
How do you calculate the effects of precession on elliptical orbits?
0
What is the shape of the Sun's orbit around the Earth taking into account elliptical orbits?
7
What point does Earth actually orbit?
4
Can one approximate the semi-major axis of an orbit as the average orbital distance for eccentric orbits?
20
What are Kepler's laws (as he wrote them)?
5
Could the barycenter orbit of our sun be greatly underestimated?
5
Data to "check" Kepler’s first law
5
How to derive Kepler's 1st Law?
3
How to calculate center (not focus) of planetary orbit?