Are there any stars that orbit perpendicular to the Milky Way's galactic plane?

Most stars orbit in the Milky Way's galactic disc. But is it possible for one to orbit perpendicular to it?

Here on Earth since we're inside the galactic plane we can't get a good view of what the Milky Way looks like. But would the whole Milky Way be visible from a planet orbiting such a star?

The Sun and most of the other stars are in the bulging disk of the Milky Way galaxy, but about 1% of the galaxy's stellar mass is in the galactic halo. The halo also includes 50 globular clusters and about 20 satellite galaxies according to Helmi 2008: The stellar halo of the Galaxy. Here is a nice graphic:

Note that the Sagittarius Stream of stars is extremely close to passing the galactic poles. If you were on a planet next to one of these stars as it passed a pole, you would probably have a glorious view of the Milky Way stellar disk.

Bodies in the galactic halo don't necessarily follow the elliptical paths predicted by Kepler, so their orbits may not be consistently perpendicular to the galactic plane. Some stellar streams have extremely odd orbital paths like the Phlegethon stellar stream, referenced in this answer: 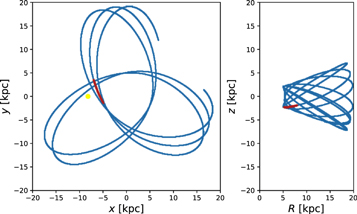 There is some speculation that the Halo stellar streams are the remnants of dwarf galaxies the Milky Way has absorbed. Indeed, Liang et al. say that:

Most stars in the galaxy are in the disc, but there is also a population in the galactic halo, these are in orbits at essentially random inclinations to the disc. There will be some that orbit perpendicular to the galactic plane.

Most of these stars are red dwarfs and very old (more than 12 billion years old) and formed early on in the evolution of the galaxy. They are also "metal poor" so have very little of any elements except hydrogen and helium. As such they are unlikely locations for Earth-like planets or for life.

There are also some stars in the galactic halo that seem to have come from small galaxies that collided with the milky way. These tend to be more like disc stars.

Given the huge numbers of stars, I'm sure that there are some in the galactic halo that have planets from which the whole milky way can be seen.

4
What is the mean separation between a star and its closest neighbor in the Milky Way halo?
5
Is there a retrograde star that passes closer to the galactic center than our Sun?

8
What is the shape (along the plane, not up-down) of stellar orbits in flat spiral galaxies
2
Why can I see the Andromeda Galaxy despite Milky Way's rotation?
6
How was the galactic plane established?
6
Can we see the stars at the edge of the Milkyway?
10
Why does the Milky Way appear to form an arch shape across the sky?
3
Is there a rough analytical expression for the Milky Way's radial mass distribution?
49
Does the Milky Way orbit around anything?
13
Is it true that we see the center of the milky-way for only half of the year?
4
What is the mean separation between a star and its closest neighbor in the Milky Way halo?
1
What object(s) are furthest above/below the galactic plane?