What is the completeness of an observation and how do I calculate it?

Many publications write about "completeness". I have a vague idea that it has to do with the ratio of how many sources from an observation are detected and how many sources are actually in that field. However, can someone please explain to me:

a) What is the definition of completeness?
b) How do you calculate the completeness of an observation?

As an example: Smolčić et al. 2008 are writing about completeness. Please have a look at A New Method to Separate Star-forming from AGN Galaxies at Intermediate Redshift: The Submillijansky Radio Population in the VLA-COSMOS Survey

a) What is the definition of completeness?

Completeness is the number of objects in a data set that are detected over the number that exist. In astronomy, completeness is often estimated for a particular apparent magnitude or flux density. As an example, for sources that are as bright as the Sun (-27 magnitude), we have a completeness of 1. That is, we’ve discovered all sources in the celestial sphere with the Sun’s magnitude. As we get down to very dim objects like tiny pieces of space junk in Earth orbits, our completeness ratio drops dramatically.

b) How do you calculate the completeness of an observation?

On a ROC curve, completeness is the True Positive Rate or the y-axis if all the objects have been observed (thanks @ProfRob!). If only a fraction of the objects have been observed, completeness is that fraction times the true positive rate. Note that a classifier only yields better completeness at the cost of higher false positive rates. Here is an excellent example of ROC curves for different algorithms which differentiate quasars from stars: 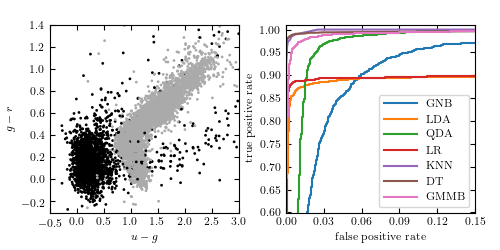 If you don’t know the true positive rate, you may be able to run a simulation in which you inject objects into your data set and determine what portion of these are found by your algorithm. This will give you an estimate of your completeness. Matlab has a specific function for ROC curve Monte Carlo simulation, for example.

Not the answer you're looking for? Browse other questions tagged observational-astronomy sky-survey definition or ask your own question.

14
How can we tell the difference between matter and antimatter by observation in space?
4
What complementary observation campaigns have looked at Kepler's field of view?
3
What was Bradley's observation concerning abevation of light?
2
How to calculate what is the best date and latitude to observe a certain object in space?
3
What is the dimensions of the smallest object detectable by an optical fiber from a specific distance?
2
How does one "use" the Pan-Starrs data?
2
How to calculate the stellar visibility?
3
Calculating and mapping the best visibility of celestial occurrence
3
Optical Observation Calls: How and Where to apply for optical observations?