How to calculate the period of a lunar mansion?

What is the period of a lunar mansion or station referring to and how is it calculated? Wikipedia says the following:

A lunar station, also called a lunar mansion or lunar house, is a segment of the ecliptic through which the Moon passes in its orbit around the Earth. The concept was used by several ancient cultures as part of their calendrical system.

Please note that the following table is included in the Wikipedia page of Lunar Mansions and also the beginning day of each period is only listed here. For example the duration of the first mansion's period is from April 5th to April 18th. It's from April 18th to May 1st for the second Mansion and so on. 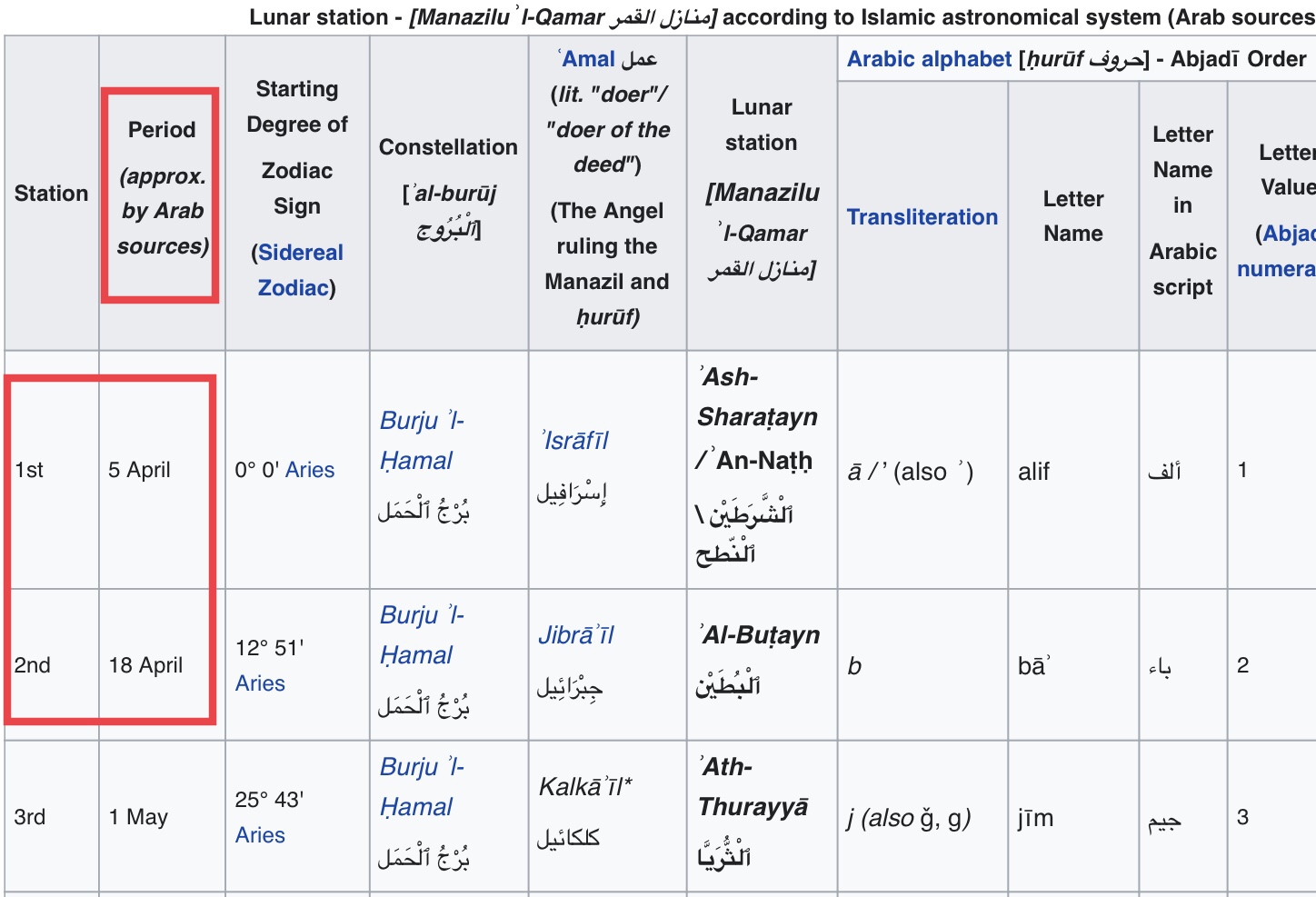 The lunar stations are laid out so that the Moon resides about 1 day in each. The Moon takes an average of 27.32 days between passes of the same star (sidereal month) or ecliptic longitude (tropical month), so some traditions have 28 stations and some have 27. Station definitions can be either sidereal or tropical, and their widths can either be equal or vary with the spacing between stars. In any case, the associated calendar dates are when the Sun passes the reference points for those stations.

The spreadsheet NOAA_Solar_Calculations_year can help you determine the Sun's ecliptic longitude for a given date or vice versa. If you set the year and time of day in column B, the date is in column D and the Sun's longitude is in column P. For example, at 0:00 UT on 2021-01-27, the Sun is at longitude λ☉ = 307.3°.

The April 23-May 10 and April 20-22 dates fit a variable-width sidereal scheme. If you put a manzil start date from this article into Stellarium and disable the atmosphere [A], the Sun appears near the corresponding star, e.g. Aldebaran (α Tau) on May 30 (Al-Dabaran) or Shaula (λ Sco) on Dec 1 (Al Shaulah). You can reproduce those dates by finding when the Sun has the same ecliptic longitudes as those stars.

The table from the Wikipedia article describes a different manzil scheme. The "period" column suggests an equal duration of 13 days, while the "starting degree" column shows an equal width of 12.86°. Since the Earth's angular speed around the Sun varies depending on the time of year, stations can have equal duration or equal width but not both. Let's choose equal width.

Which method you prefer is a matter of opinion.

If I understand the concept of "mansion" correct, it is similar to an astrological sign, and astrononomically simply refering to a certain zone in which a certain object (here: the Moon) can be seen on the sky.

More specifically, a Lunar station - [Manazilu ʾl-Qamar منازل القمر] according to Islamic astronomical system seems a certain sector of the sky and the sky is divided into 28 of theses sectors. This defines a celestial coordinate system with $x$-axis being the ecliptic, the celestial longitude. The longitude is measured in degrees east of the vernal equinox (the ascending intersection of the ecliptic and equator):

An algorithm to determine the Lunar station at a given time would have as input parameter only the position of the Moon on the sky (actually only the Ecliptic longitude $\lambda$ of the Moon) and check in which interval $\lambda$ lies. The lower boundary of each mansion is given in the 3rd column in the Wikipedia-table shown in the question in a rather inconvenient format, namely in degrees and minutes from a start of a zodiac symbol.

In a first step, you would have to convert the Wikipedia list to a intervals with real celestial longitudes. You would end up with 28 if-clauses in your algorithm to determine a string $s$ containing the name of the lunar mansion:

Here we used the fact that Pisces starts at $330^\circ$ celestial longitude.

Since you are after the begin and end dates for a each lunar mansion you have to calculate at which time the Moon celestial longitude $\lambda$ equals to the boundaries of the 28 intervals. I would do it vice versa and calculate for each day of the year at 00:00:01 local time the longitude of Moon and then use $s(\lambda)$. You will end up with a table of 365 or 366 date- string-pairs. In the last step, you discard all lines of the table where a string repeats and reduce the list to 28 entries, with the start dates in the first column.