In X-ray astronomy, the source is considered to be in the hard or soft spectral state. So what is the meaning of the hard spectral state? What are the soft state and hard state in spectroscopy?

Not only in X-ray astronomy (chemistry also and pretty much everything related to X-rays). If you have an X-ray spectrum, the region with photon energy > 5-10 Kev is called "hard" X-rays, less than that it is called "soft" X-rays. Wiki has a nice explanation for that (Energy Ranges): https://en.wikipedia.org/wiki/X-ray However, I find the book better: https://web.archive.org/web/20121111141255/http://ast.coe.berkeley.edu/sxreuv/

If the high energy spectrum is in a thermally dominated state, ie a Planck-like spectrum, then it is certainly soft. If it is in a steep powerlaw dominated state with low $\alpha < 1, I_\nu = f^{-\alpha}$, then it is still usually considered soft. But if $\alpha$ is higher, then it is hard. But, it is also a relative term, so a system cycling between any two different values of $\alpha$ will be going between its hard state and its low state.

Just to add an example to what has already been said by eshaya and Larz.Astro. Here is the spectrum of the Black Hole binary Cygnus X-1 in its hard and its soft state. The plot is taken from Gierlinski et al. 1999 . 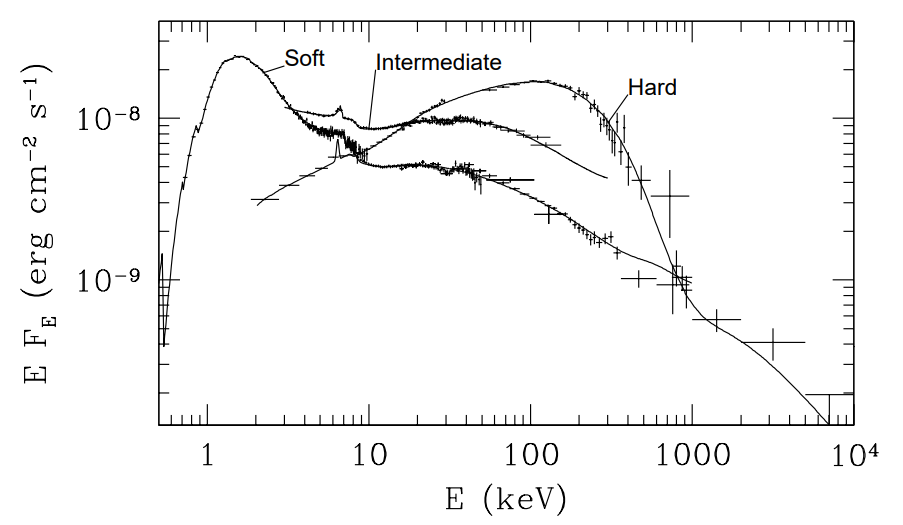 You see that the soft state consist of mostly thermal emission below 10 keV, while the hard state is dominated by non-thermal (comtonized) emission above that. Or as the paper puts it:

The resulting Xγ spectrum consists of blackbody photons emitted by the disc (at low energies) and a component due to Compton upscattering of the disc photons by both thermal and nonthermal electrons in the corona.

Not the answer you're looking for? Browse other questions tagged observational-astronomy spectroscopy x-ray spectral-type or ask your own question.

2
Why do we observe spectral lines of specific energy?
4
What are the curved lines in this X-ray image of the sky?
3
Are the sub-spectral types (1,...9) based on temperature or spectral lines?
3
What does the "a" at the end of a spectral type mean?
4
What leads an observer to choose a narrow slit over a wide one (and vice-versa) when observing?
4
What is the significance of the velocity resolution in spectral line observations using radio interferometry?
1
What happened to NS spectral types after OBAFGKM?
1
Where do Astronomers usually get their wavelengths? Where do they turn to look up standard, accepted values for spectral features?
2
What is in this soft x-ray image?