Does lack of atmosphere on the moon make earth-shine more, or less, bright?

The earth acts like a light-globe in the sky for half of the moon, the side that is facing the earth. In what way does lack of moon atmosphere influence earth-shine. Does it make earth-albedo brighter, or dimmer? Either way, do we know with how much? Put differently; would an atmosphere make it easier, or more difficult, to read a newspaper on the earth facing lunar surface, after sunset?

The lack of a lunar atmosphere doesn't affect Earth's albedo at all, since albedo is only a measure of the diffuse reflection of a body.

However, the apparent brightness of the Earth as viewed from the surface of the Moon would be affected if the Moon had an atmosphere. This, of course, would depend on the atmospheric composition of the Moon.

If the atmospheric composition of the Moon was such that it absorbed visible light, then the Earth would appear dimmer, or perhaps not even be directly visible (similar to how we can't directly see the Moon when the weather is cloudy here on Earth).

If the atmospheric composition of the Moon absorbed almost no visible light, and was highly refractive, the Earth-Shine might be overall brighter than if the Moon had no atmosphere at all. The refraction would bend some of the Earth-Shine into the surface of the Moon which otherwise would have passed by. This picture shows the analogous situation for Earth and the Sun: 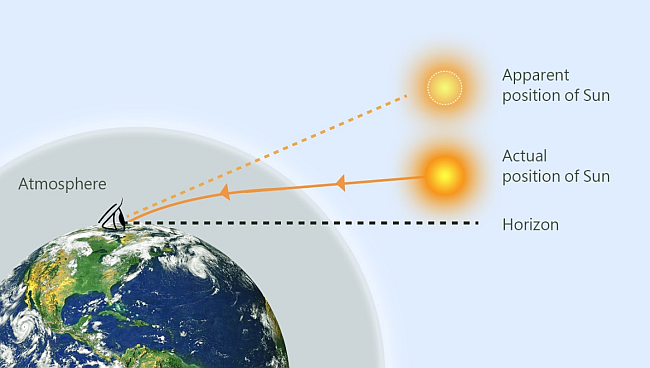 ConnorGarcia's answer is great. The point about refraction is particularly interesting. I just wanted to describe the mechanism a bit. If you look at the sky on cloudless day, it appears blue and is brighter than the blackness of space. Where does this light come from? It is sunlight scattered by the atmosphere. So, ignoring refraction, if you look directly at the sun (hypothetically—don't do it in real life and ruin your eyes), it is a bit less bright than it would be if there were no atmosphere. Some of the light coming directly from the sun is scattered, which makes the whole sky light up (with a preference for blue).

The same would be true for the Earth as viewed from the Moon. With a sufficiently thick atmosphere, the sky on the Moon during lunar night would no longer be as black as it is now. Some of the Earthshine would be scattered by the atmosphere, lighting the whole sky and reducing the intensity of the direct light from the Earth.

Not the answer you're looking for? Browse other questions tagged the-moon albedo .

1
Which unit is most suitable in comparing needed light intensity for night reading on the Moon, vs on Earth?

14
How does moonrise/moonset azimuth vary with time?
14
Why does the darkening of the Moon go from left-to-right during an eclipse?
8
Why do dark objects look white from a distance? (Moon, Ceres, but not Earth!)
4
Can you see city lights on the Moon from Earth?
7
Why can I see the dark side of the moon?
3
Did the Moon ever approximate a geosynchronous orbit above the early Earth?
2
Does the Sun and Moon basically appear to "move on the sky" identically regardless of location and date?
17
Why would the side of the moon that faces earth be as dark as the far side of the moon?
16
How many times brighter would full-earth-shine appear to people standing on the moon, than full-moon-shine does to people on earth?