I've been watching an astronomy course on YouTube and I'm struggling to calculate stars' positions based on their right ascension.

What I'm trying to achieve: Calculate when a star (Sirius in this example) will be exactly on my local meridian.

What I know: The star's right ascension and the "noon" time (=when the sun will be exactly on my local meridian).

Let's assume we are on March 21st: According to https://stellarium-web.org/ The sun will be on my meridian at 12:10. Sirius's right ascension is 6h46m, which means Sirius should be at the meridian 6h46m later which is 18:56. According to Stellarium Sirius will indeed be at the meridian at 18:52 (I suppose that 4 minute difference is because the sun is already 4 minute behind due to Earth rotation).

But when I try to do the same calculation for today (Feb 10th) I get a 20 minute error. The "noon" on Feb 10th where I live is at 12:18. We add Sirius' right ascension to get 19:04. But this time we also have to take into account the fact that we are 41 days away from March 21st. Each day the sun falls behind by ~4 minutes, so that's 2h44m. If we add that to 19:04 we get 21:48. So that's the time Sirius should be at my local meridian on this particular day. But Stellarium shows that Sirius will actually be at the meridian at 21:26. So there's 22 minutes error in my calculations for some reason.

What am I missing here?

The sun's position is irrelevant to when a star will be in its meridian; the Sun's coordinates in the RA/dec grid does change over the year. A star's position is fixed in that system and it will be always at the exact same sidereal time that it culminates (as that's the definition of sidereal time).

The difference of the sidereal day to the mean solar day is ~3:56 minutes (366 earth revolutions in a sidereal year, 365 in a solar year), thus a star culminates (and rises and sets) that much earlier each day.

If you compare it to the true solar time (which determines when the Sun is in the meridian) as you try, you also have to account for the difference of the mean solar time and the true solar time due to the eccentricity of Earth's orbit; this phenomenon visible as the analemma (which basically visualizes the equation of time) accounts for a difference of the true noon which varies by about +-20 minutes throughout the year - and can explain the differences you see. This means that the Sun culminates at different times throughout the year. On March 21st it may be 12:00h. But that is not exactly true 2 month earlier or later, it might be 11:40h or 12:20h.

I think the explanation in the video as linked in your comment as "hours behind the sun" can be a bit mis-leading, and is only exactly true for that one exact date (and defines how the two coordinate systems align with respect to eachother) - but he ignores the equation of time and assumes the mean solar time to be used while his words "behind the sun" imply true solar time. For the task at hand, where to visually find a certain constallation, that is good and accurate enough, though - so not wrong, just mathematically you will have to consider effects he graciously left out.

Note: I'm accepting this as the answer because the main cause of the problem was that I was counting the days wrong. But there is another more important, more fundamental problem which was correctly pointed out by planetmaker and PM2Ring so make sure you read their answers/comments as well.

I figured what I've been doing wrong.

I was counting the days until March 21st, while I should have counted the days since March 21st.

Edit: I'm still getting a lot of error with both the 4 minute rule and the supposedly more accurate way of calculating sidereal hours using the formulas used here.

Edit2: I did some reading and some calculations and as correctly pointed out by planetmaker and PM2Ring the reason for the error I'm getting is due to the equation of time. In short other than accounting for sidereal time one should also account for the irregularity of Earth's movement around the sun which will cause about +/-16 minutes of error in time keeping.

I wrote a script and the error is indeed at maximum when the equation of time graph is at its max or min values. The error I get is almost exactly the same as the table below: 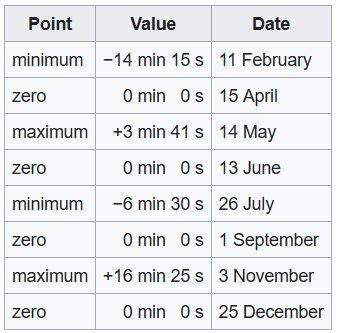 The formula I used is:

Where actual days is number of days since March 21st.

The sidereal hours calculated here will be the Sun's right ascension in that particular day which should be subtracted from the star-of-interest's right ascension as described in the video in my original question.

Note that if you round up the values more you'll get more error. Also if you use the 4 minute per day rule for calculating the sidereal hours you'll get much more error the closer we get to the end of the year (because the number of days increases and the error accumulates).

This is pretty basic stuff but I'm a noob and just wanted to make sure for myself that the error is indeed due to the equation of time.

As it seems I won't be able to get a very accurate result just by linearly accounting for sidereal time.

And thank you everyone for helping me find the answer.

The Equation of time has nothing to do with stars. It's just a measure of the irregularity of the Sun's apparent position, which varies over the course of a year. As planetmaker points out, the Sun's position is irrelevant to stars' positions.

You don't need to know sidereal time, as such. You just need a reference time and position of the vernal equinox, which is the zero reference for right ascension. It moves 360 degrees westward every sidereal day (23.9344696 hours). Sirius is 6h 46m behind. The vernal equinox, in a few minutes, at 1900 UTC, will have a Greenwich Hour Angle of 67 deg 3.1 min. That's the west longitude of its meridian at that time.

I assume you know how to crunch the numbers

Not the answer you're looking for? Browse other questions tagged right-ascension .