Recently, the most distant object in the solar system was discovered. How was this accomplished?

It was recently announced that the most distant object in our solar system was discovered. This object averages 132 AU from the sun. The object, initially named Farfarout, was estimated to be 400 km across. How was such a small object found and its orbit estimated by a ground-based telescope? This seems to really be pushing the limits of observable objects. Or am I wrong on this?

The discovery announcement by the Minor Planet Center indicates that 2018 AG 37 ("Farfarout") was between 25.0 and 25.3 magnitude. The positions are based on observations taken with the 8 m Subaru telescope and 6.5 m Magellan-Baade telescope.

As a comparison, this ancient article by Sky & Telescope (What Is The Faintest Object Imaged By Ground-Based Telescopes?) indicates the Subaru telescope limit is around 27.7. ("Ancient" in terms of CCD cameras and computer processing. The article is from 2006.) Note that this same article indicates that a 16 inch (400 mm) amateur telescope should be able to capture images to 24th magnitude -- just 2x to 3x brighter than Farfarout!

Also, the Subaru Exposure Calculator indicates an exposure of 1 minute will capture a 25.3 magnitude object using default input (except for the Moon, which I set to New Moon). 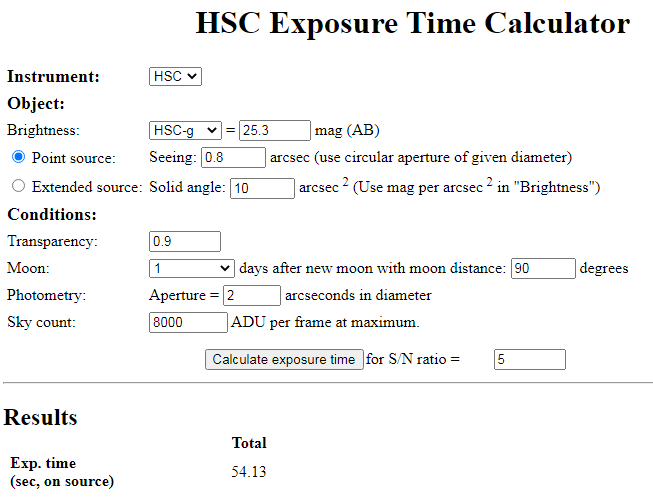 Thus, it seems almost "easy" to capture an image of it.

Finding an unknown, faint object is another issue. I do not have any information on this aspect of the question, but I feel safe that computer searches are quite adept at finding such things. Once the first image (or pair of images that show motion) is found, other images are often found or taken to facility the calculation of the orbit. The time span of the images is only two (2) years which is short for a body with a period of 1000 years (estimate). The Wikipedia page for 2018 AG37 currently lists large uncertainties for the average distance (86 +/-68 AU) and period (798 +/-941 years). Those uncertainties will be reduced as a longer arc of the orbit is measured.

Not the answer you're looking for? Browse other questions tagged observational-astronomy planet solar-system or ask your own question.

59
How many planets are there in this solar system?
5
Where might astrometric observations of the Roadster spacecraft be catalogued?
10
If Planet Nine indeed exists, how large a impact event there should be to be seen from Earth?
1
Could more objects from the Oort cloud with highly elliptical orbits be discovered in the future?
2
What is the distance between solar system and a distant galaxy
5
How was the recently publicized Hubble image of a distant galaxy showing clearly resolved lensed in an Einstein ring produced? When was it produced?
1
Is a black hole found in the centre of the low-surface-brightness and dark-matter-free galaxy AGC 114905