Did the Moon have a substantial atmosphere in the past?

The layer of gas surrounding the Moon is very thin. It is a surface bound exosphere, where particle-particle collisions are rare.

In the past, the Moon was more geologically active, with eruptions filling craters with magma and whatnot. Eruptions often come with out-gassing. Was this enough to give the Moon a thicker atmosphere, or was this gas immediately stripped away?

Did the Moon have an actual atmosphere at any time in history? If so, when did the lunar atmosphere reach the pressures we observe today?

TL;Dr: Yes, the Moon had a substantial atmosphere in the past.

Did the Moon have an actual atmosphere at any time in history?

In October 2017, NASA scientists at the Marshall Space Flight Center and the Lunar and Planetary Institute in Houston announced their finding, based on studies of Moon magma samples retrieved by the Apollo missions, that the Moon had once possessed a relatively thick atmosphere for a period of 70 million years between 3 and 4 billion years ago. This atmosphere, sourced from gases ejected from lunar volcanic eruptions, was twice the thickness of that of present-day Mars. It has been theorized, in fact, that this ancient atmosphere could have supported life, though no evidence of life has been found. The ancient lunar atmosphere was eventually stripped away by solar winds and dissipated into space.

Intense volcanic eruptions during that time spewed gases above the surface faster than they could escape to space and that formed a thick atmosphere. In order to calculate how much gas was present in the ancient lunar atmosphere, research scientist Debra H. Needham of NASA Marshall Space Flight Center and senior staff scientist David A. Kring of the Lunar and Planetary Institute (LPI) analyzed ancient lava flows on the Moon’s surface called maria (the dark patches on the surface of the Moon which are volcanic basalts which cooled over time), as well as Moon rocks collected during the Apollo 15 and 17 missions. By examining the rocks, the researchers found evidence of carbon monoxide, hydrogen and oxygen (ingredients for water), sulfur, and a number of other volatile gases. 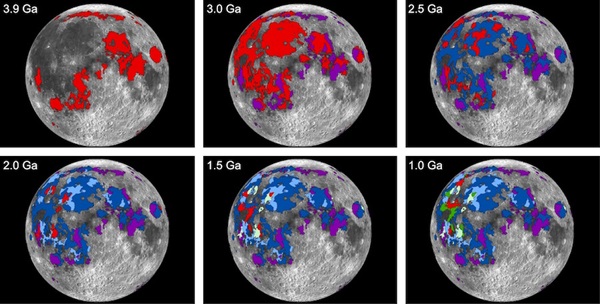 Although majority of the lunar atmosphere escaped the Moon’s gravity and drifted off into space, there are some gases that could have settled into freezing, shaded craters near the lunar poles. If so, these volatile gases may be trapped in icy deposits, forming reservoirs of air and fuel that astronauts can tap into for future missions to the Moon and beyond.

If so, when did the lunar atmosphere reach the pressures we observe today?

At its densest (around 3.5 billion years ago), the Moon’s atmosphere would exert a pressure of about 1 kilopascal. For reference, pressure at sea level on Earth is around 100 kilopascal.

18
Does the Moon have any oxygen in its atmosphere?
9
Could the earth's atmosphere have been partially stripped by a passing rogue planet?
3
If the moon still had a magnetic field how long would have been possible to keep an atmosphere?
7
What causes the abundance of dust to 'float' in the thin lunar atmosphere?
7
Why did the moon have a distinct reddish edge tonight?
3
Is the moon inside earth’s atmosphere? If so, what are the consequences?
5
Could Eris have a permanent atmosphere?
5
Solar wind, Earth wind and planetary winds?
3
...but where did Mars' atmosphere actually GO?