If the Sun disappeared, could some planets form a new orbital system?

If the sun were to suddenly disappear, the planets would continue to travel tangentially to their former orbits. (This I know from this answer to a somewhat related question here.)

In such a scenario, is it possible (however unlikely) that a new orbital system would form from two or more of the now-rogue planets? For example, is it physically and mathematically possible that Earth might end up getting captured by Jupiter and thereby become one of its moons? Or do the size and speed of the planets completely rule out such a scenario, even if the sun disappeared at such a time that the planets' new trajectories would cross?

The issue here is whether pairs of planets can become gravitationally bound to each other.

In the two-body problem the trajectories or orbits are ellipses (bound orbits), parabolas and hyperbolas (unbound). For all practical purposes, an encounter looks like they start out at infinity with some finite speed, approach each other, and then maybe fly away or remain bound. This situation (finite speed when far away) corresponds to a hyperbola, so the generic case will not form a new bound system: some of that energy needs to be shed somehow.

Another important possibility is a three-body encounter. This is how comets get into short-periodic orbits when falling into the solar system: an encounter with Jupiter (or some other planet) leads to a gravitational "assist" that makes it bound with the sun.

In your scenario where the rogue planets fly off along their tangents it is very unlikely that any start out bound to each other since planetary orbital velocities around the sun are much bigger than the orbital velocities of a bound planet-planet pair at a large distance. Hence they will just fly apart. In theory they might have an encounter before leaving the solar system vicinity (e.g. Mercury by sheer chance sweeping past Jupiter) and that leaves a tiny chance of a three-body interaction with moons or a merger, but the chances are truly tiny. The generic case is just scattering.

For a body to be bound to another body of mass $M$ it need to move slower relative to it than escape velocity $v_{esc}=\sqrt{2GM/r}$. If we assume planets move in circles we can then take their orbital velocities for all possible positions along the orbit, calculate the relative velocity, and compare it to the escape velocity.

The result is this diagram, where I have plotted the separation on the x-axis and how many times escape velocity the relative velocity is on the y-axis. The numbers denote which pair of planets I am comparing. The blue horizontal line is $\Delta v=v_{esc}$. 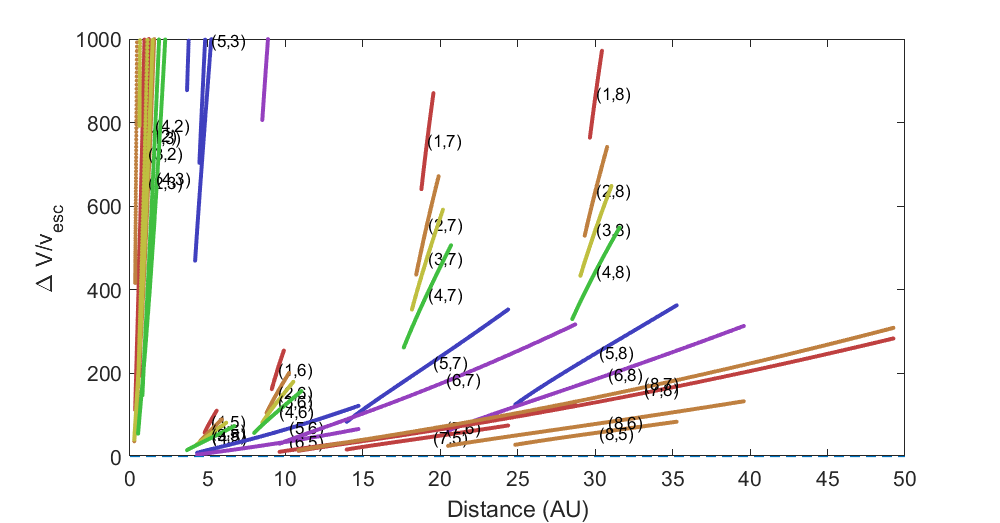 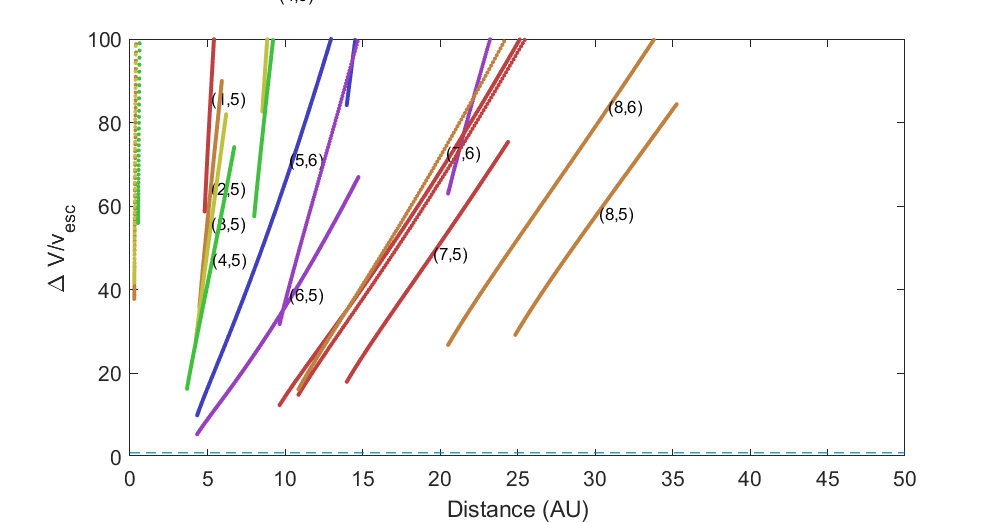 Looking just at the lowest relative velocities shows that the closest to being potentially bound is Saturn to Jupiter were the sun vanish just as they are moving in parallel, but even in this case Saturn has several times Jupiter escape velocity.

One could complicate it with inclinations and elliptic orbits, but it will not change the qualitative picture: the planets are not even close to being bound to each other in the absence of the sun.

No. The 8 planets would go into 8 different directions. It is because their relative velocity to each other is much higher than the escape velocity, even from their smallest distance. If it would not be so, their orbits could disturb each other significantly, even today with the Sun. Thus, the Solar System would become chaotic.

However, the moon systems of the planets would remain practically intact.

There is a very little chance that a 3-body or more-body system from the planets is created for a short time. Then some of them escapes, leaving a gravitationally bound (most likely) 2-body system. Similarly possible, but very unlikely, that an impact would happen. Both of these have a very small probability, you can safely expect that all the 8 planets go into 8 directions.

I gave a try at refining Anders Sandberg's answer with the equations for a two body system.

The total kinetic energy is the sum of the kinetic energies ($E={1\over{2}}mv^2$) for each body relative to the common center of mass.

According to Anders' plot Jupiter and Saturn are the closest to being bound, so I made a calculation for that pair using data from these nasa pages, ignoring excentricity and inclination.

So in conclusion, the kinetic energy is about 25 times too high for Jupiter and Saturn to be bound, so they will fly apart.

But you could have got the idea already by looking at orbit perturbations the planets inflict on each other: They are mostly negligible.

Come to think of it — it cannot be otherwise in a stable planetary system: During the evolution of planetary systems the orbits of planets which are too close to each other will be changed exactly because they are too close (relative to their mass). Their orbits will become irregular; they may be ejected from the system, collide with other bodies or come to rest in a new, more stable orbit. The stable state of a planetary system, and hence the look of any "mature" system, is one where the planets don't perturb each other's orbits.

In such a system, like ours, the central star's gravitational impact is orders of magnitude stronger than the planets'. (Some residual perturbations have an effect when accumulated over astronomical times and lead to resonances etc., but we are looking at one-time effects here.)

Anders' computations showed that the same is true for the other planet pairings.

I see one possible way for this to sort-of happen. Anders Sandberg did a good job of showing why a simple capture is impossible, but there's an extremely unlikely but not impossible scenario he missed.

Consider Jupiter and Saturn. They're on the same side of the sun, Saturn is ahead of Jupiter. The black hats kidnap the sun and they're free flying. Jupiter comes barreling up on Saturn, way too fast for a capture--but what if we have an offset impact event? Jupiter will steal mass of Saturn but if exactly the right amount of energy gets transferred Saturn ends up with ever so slightly more energy than it needs to escape. It then needs to run over a Jovian moon on the way back out, losing a bit of speed but changing the shape of it's orbit so its periapsis isn't within Jupiter's Roche limit.

The results are cataclysmic, whether you should even call the results the same planets is questionable.

Without the sun... at current orbital velocities... The planets would fly apart... But exactly how far would they fly? Would they continue indefinitely into interstellar space? Or would they fly out into the Kuiper belt or Ooort cloud and subsequently fall back toward some barycenter.

Removing the sun removes 99% of the mass of the solar system... so this could dramatically alter the barycenter of the system. Assume all/most planets are in one quadrant at time of sun's disappearance. Then presumably those planets with roughly similar trajectory would not have escape velocity relative to their shared barycenter.

Take for example the recent alignment of Jupiter and Saturn. There was definitely a window of time this year where if the sun had disappeared, Jupiter and Saturn would have formed an orbital system between the two, and had Earth or some other planet been behind them in orbit, overtaking them like a rock in a sling that, released at the precise moment, find its mark, that planet might get caught up in their system. (especially because our inner planets have higher velocities than more outer planets)

But if you could, with your hand of god, place the planets just so that they were least optimally arranged for the formation of an orbital system in the sun's absence... how far would they fly? Would they escape into interstellar space? I would think in 99% of planetary arrangements, this would happen since these planets are so tiny relative to the space between them and relative to their velocities and relative to the mass of the sun which is 99x the total mass of everything else in the solar system.

Not the answer you're looking for? Browse other questions tagged orbit gravity space-time rogue-planet or ask your own question.

6
How can I calculate the orbital periods in a binary star system?
3
How do rogue planets orbit around stars in other planetary systems?
2
When the sun explodes, will some of the planets in the Solar System survive and become rogue planets?
0
The consequences and the mechanisms of a shift of the Earth away from the sun
3
Are the planets in our solar system in free fall?
4
How small could an orbital system be in our solar system?
2
Scholarly work on the gravitational disruption of a rocky planet by a close pass with another planet?