Is it correct to say that only binary and solitary star systems are stable?

Recently it has been shown that a large number of binary stellar systems exist. It seems to me that the orbits of stars in systems containing three or more stars will inevitably be chaotic, resulting in either mergers or ejections. Binary stellar systems, though, are effectively stable (neglecting the very slow decay of orbits due to gravitational radiation and perhaps tidal interactions). So, it seems that in the long run we should expect most stellar systems to be either binary or solitary; the first due to ejection (eventually) of all but two of the stars from a multi-stellar system, and the second due to the ejection of single stars from multi-stellar systems. Is this correct?

It isn't proven that any real orbital systems are stable on sufficiently long time scales. Even our (single star) Solar System is not stable. In their paper: On the Dynamical Stability of the Solar System, Batygin and Laughlin, use the numerical techniques pioneered by Laskar to show scenarios in which various planets fall into the Sun or are ejected from our Solar System on a timescale of 20Gyr.

The area of math that dominates long term orbital stability questions is Chaos Theory, which studies the types of systems of differential equations for which very tiny changes in the initial conditions cause very different resultant solutions. Over long time scales, tidal forces, stellar radiation, and other energy sources cause orbits to evolve. When resonances are reached, orbits can begin to de-stabilize. Examples of this can be found in the Kirkwood Gaps of the asteroid belt.

Given the overwhelmingly high populations of binary star systems in the Milky Way (table below from wikipedia), we could probably call binary and single star systems stable at least at 10-100Gyr time scales. 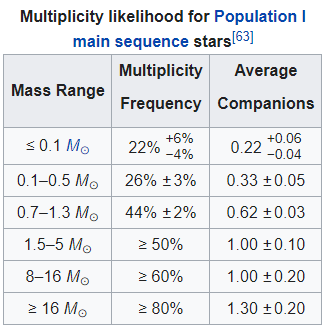 However,Correa-Otto and Gil-Hutton point out that merely being in a galaxy causes binary orbits to be perturbed:

Given the paucity of discovered n-star systems where n is greater than 2, I think we can safely say these systems are mostly unstable at timelines on the order of 1-10Gyrs. In fact, many of them are unstable on much shorter timelines.

But unless that prevents trinary or higher star system from remaining stable long enough to possibly have planets that become interesting from a science fiction point of view, will such lesser stability matter to most people? It seems to me that most people will consider multiple star systems stable enough to last long enough to potentially be interesting from a science fiction perspective to be stable enough, no matter how much less stable they are than double or single stars.

Proxima Centauri has two planets: Proxima b, an Earth-sized exoplanet in the habitable zone discovered in 2016; and Proxima c, a super-Earth 1.5 AU away, which is possibly surrounded by a huge ring system, discovered in 2019. Alpha Centauri A may have a mid-sized planet in its habitable zone, Candidate 1, though it is not yet known to be planetary in nature and could be an artifact of the discovery mechanism. Alpha Centauri B has no known planets: planet Bb, purportedly discovered in 2012, was found to be an artifact, and a separate transiting planet has yet to be confirmed in nature.

The Alpha Centauri system is believed to be somewhat older than the 4.6 billion years of our solar system.

Another famous and relatively close triple star system is 40 Eridani, also known as Omicron 2 Eridani. 40 Eridani A has a known planet.

In 1991 Gene Roddenberry and two astronomers decided that 40 Eridani would be a suitable system for the fictional planet Vulcan to be in, since 40 Eridani is believed to be about 4 billion years old, almost as old as the Sun.

So clearly some trinary star systems, presumably a minority of those that form, but possibly a majority of those existing at any one time, can be stable for the billions of years necessary to become interesting for science fiction purposes. They can last long enough for life to possibly develope on their possible planets and to last the billions of years necessary for thoxe planets to possibly becaome habitable for humans and/or evolve intelligent beings, and thus be interesting from a science fictional point of view. And without colliding or ejecting any stars (unless they were originally more complex systems) and while retaining at least a few planets in stable orbits.

The Kepler-64 system is a quadruple or quartenary system with aplanet PH1b orbiting two of the stars. The system is estimated to be about 2 billion years old, which is probably too young to be interesting from a science fiction prespective.

It seems to me that most people will be content with multiple star systems that remain stable long enough for their possible planets to possibly develop life, or even become habitable for humans, or even have intelligent life. Lasting long enough to become interesting from a science fiction point of view should be stable enough for most people, even if trinary stars turn out to be much less stable than binary or single stars.

Not the answer you're looking for? Browse other questions tagged astrophysics binary-star multiple-star-systems or ask your own question.