Fate of a planet orbiting a Lagrange point behind a star?

Let's say there is a planet orbiting at L5 behind a star, which is in turn orbiting a more massive star, like so: 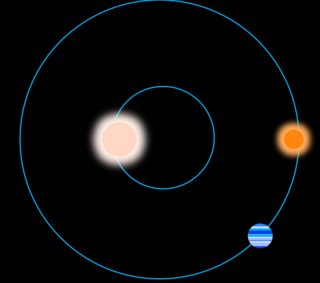 What is the ultimate fate of this planet? I'm predicting that it will spiral into the star, or end up in some sort of horseshoe orbit. Is this prediction right? If so, why? If not, where did I go wrong?

The stability of this system depends the ratio of masses of the two stars. If the larger star is more than 25 times more massive than the smaller star, then L5 is potentially stable, and this remains the case even if the planet does not have negligible mass

The calculation of the value is done in detail on physics.stackexchange and there you can establish that the key factor in the stability of L5 is the masses of the major and minor bodies, and not the mass of the Trojan.

If the mass of the central star is more than about 25 times1 the orbiting star, then the planet will be stable. If it is less then L5 is not a stable point, and the planet will tend to move away from L5, and ultimately may collide or be ejected: the behaviour will be chaotic.

Not the answer you're looking for? Browse other questions tagged star orbit planet binary-star lagrange-point .

5
Double Planet Orbiting Wide Binary Star?
7
Is it possible for two stars to be in a horseshoe orbit around a much larger star?
5
Can a black hole "supernova"?
3
How feasible would it be to get to a planet orbiting directly opposite Earth?
4
Can tidally locked planets have liquid oceans on their night side, and would such a planet be habitable?
2
Why doesn't smashing larger and larger bodies incrementally into a rocky planet create a star?
0
When a fast-moving star goes supernova, how will the resulting remnant evolve?
5
How to calculate eclipses on a planet in a binary star system