Can circumstances exist such that as seen from some solar system all stars are obscured?

I am mostly active on Physics Stack Exchange but a question occurred to me that I think is best submitted here.


In the history of astronomy the fact that the fixed stars were available as reference of celestial motion was hugely helpful.

For example: my understanding is that Kepler's approach to finding the shape of the orbit of Mars was as follows. From astronomical records extending over a long time the period of the orbit of Mars can be reconstructed. Kepler would take pairs of Mars position observations, spaced one Mars year apart. These pairs of Mars positions were from two different Earth positions, allowing Kepler to triangulate.

The intended thought experiment:
A solar system in a region of its galaxy with such a density of interstellar gas that all the stars are obscured. Without the fixed stars as reference of celestial motion the Kepler problem would be much harder.

(The purpose of this thought experiment is to argue that while it would have been harder to obtain the inverse square law of gravity, it would not be impossible. This can then serve as demonstration as to what theory of motion is.)


Some of my guesses:
My understanding is that all parts of the galaxy can be observed, it's just that for some parts the observed luminosity of the stars is diminished because the light coming from those stars traveled through regions with interstellar gas. That would make it very unlikely that interstellar gas can be dense enough to obscure absolutely all stars.

That brings me to guessing that this thought experiment would require rather contrived circumstances. For instance, maybe it would require a star to be out in intergalactic space. That would mean that star has had the misfortune, in its distant past, of being ejected from its originating galaxy.

Assuming the planet is rotating and that the axis has an inclination with respect to the orbital plane:
Once the astronomers make the transition to a heliocentric model:
The astromers have the measurement of duration of the solar day, and from the fact that the duration of the year is constant over time they can, it seems to me, infer the ratio of the solar day to the intrinsic day. The astronomers can opt to use the line of intersection between the plane of the equator and the planet's orbital plane as a reference of zero rotation rate. (Of course, a rotating planet that has an inclination will undergo gyroscopic precession. However, the precession of the equinoxes is slow enough that on the assumption that the reference is stationary highly fertile science will be possible.)

It seems to me that once such a reference system is in place a Kepler has the opportunity to find Kepler's laws of planetary motion.

Summerizing:
Motion itself is sufficient to provide reference of motion.

The Coalsack nebula is likely a fairly typical dark nebula, reducing starlight by about 10 magnitudes over about 35 lightyears. A solar system in the middle of the nebula would hence get a reduction of outside stars by 5 magnitudes, which would hide much of the galaxy but would just reduce a bright star like Polaris to a faint one at the limit of unaided vision. While denser clouds likely exist, they are likely not opaque enough for the scenario unless they are very extensive (a galaxy like M64 may have big enough dust clouds to be more suitable, but there are going to be stars mixed in with them).

Runaway stars may be closer to the scenario. They do not have to undergo very radical accelerations (e.g. they could be part of a tidal tail ripped out by a passing galaxy), although the most noticeable ones have undergone some drama. If separated far enough into a void the distance modulus can bring the magnitude of all galaxies down to the level where you need a good telescope to see them.

A planet with no stars?

Our solar system could certainly pass through a Bok Globule, which is a dense cloud of opaque interstellar dust and gas. They are typically about a light year across, so we could be stuck in one for quite some time. While this would obscure the other stars while we passed through, I don't think Earth would be a very good place to live during that time. Gas and dust falling into the Sun would probably strip or change our atmosphere and end life on Earth.

When stars form in a Bok Globule, the gas in the star's sphere of influence gets pulled into the interstellar disk and then either absorbed by the star and planets or ejected out of the stellar system. I suspect that a star couldn't form without leaving big holes in the globule.

But suppose life emerged on a tidally locked planet. If only the sun-facing side of the planet was warm enough to support life, but the dark facing side was fatally cold (even near the day/night transition zone), then the inhabitants might never see the other stars due to light pollution from their sun. 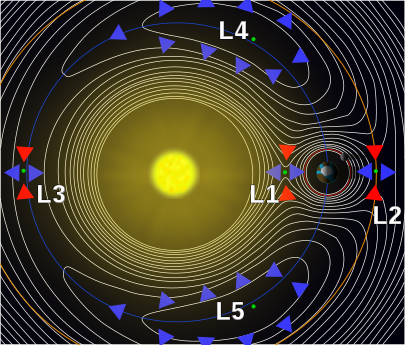 Unfortunately the L1 orbit is unstable, so a planet in such an orbit wouldn't stay there for long.

On a planet in constant daylight, the other planets would also be difficult or impossible to see. Highly reflective gas giants in nearby orbits would certainly be visible, though.

It would be much harder to deduce a model for the motion of the planets without fixed stars in the back ground.

But say one has a single observatory, and the only things one measures are the times and azimuth angles for the high magnitude solar system bodies (the Sun, Moon, Mercury, Venus, Mars, Jupiter, and Saturn) as they ascend into the sky and descend out of it (for a fixed elevation angle).

If one gathers these for a few years, they will have enough data to have an overdetermined system to calculate the latitude of my observatory, the Earth's axial tilt, the Earth's rotation rate, and the orbital elements of all the bodies they can observe.

Runaway stars are stars with enough speed to escape the galaxy. It is possible for a runaway star to hold onto its system of planets, especially if they orbit close to the star.

Getting the dynamics just right that the process that ejected the star doesn't also sterilize any planets, and that the planets are not striped from the star in the ejection, is difficult. Runaway stars are not the first place that a SETI mission would consider.

However, such stars will travel outside the galaxy. Once the star is far enough away from the disk, no individual stars will be visible, only the hazy form of the milky way. Getting precise astronometric coordinates would be more difficult without any point sources of light.

Not the answer you're looking for? Browse other questions tagged interstellar-medium or ask your own question.

4
Is it likely that intergalactic stars would still retain their planets?